A strong concept meets some performance anxiety in “Money Shot” #1. 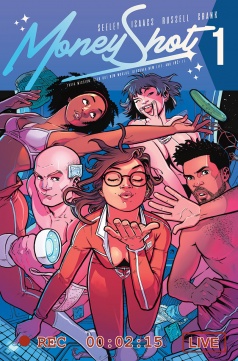 In the near future, space travel is ludicrously expensive and largely ignored. Enter Christine Ocampos, inventor of the Star Shot teleportation device with a big idea: She’ll travel to new worlds, engage—intimately—with local aliens, and film her exploits for a jaded earth populace trying to find something new on the internet. Now, Chris and her merry band of scientist-cum-pornstars explore the universe, each other, and the complexities of sex in MONEY SHOT! A story about scientists having sex with aliens for the glory of mankind—and money

An amazing concept meets a disappointing execution in “Money Shot #”1.

Seely and Beattie’s plot starts incredibly strong with the first page’s “I want you to fuck me, sexy fish man.” It captures the pitch of the series on one page and gives readers what they expect out the gate, but unfortunately, it doesn’t go much deeper than this in any particular way. After preparing the production of their livestream we get a flashback that takes up the majority of the issue explaining how they got to this point which is one of the issue’s biggest drawbacks. “Money Shot” #1 is obsessed with telling you the setup but rarely do we get to enjoy the punchline. The credits, just before the first page and the bulk of the issue all give the set up for how the core cast gets to where they are and that story is truly met with diminishing returns. The preamble page is really interesting to read and immediately gives readers a sense of the world. The book then takes twelve pages to give the story of is told better in the solicit text and on the credits page.

There’s a lack of focus on what “Money Shot” #1 wants to be. It wants to be science fiction story, a sex romp, and a societal commentary but it doesn’t do any of these more exceptionally than the other and it does not do any of them together seamlessly. The challenges of the labs and funding sort of blend the social commentary and science fiction pretty well but the characters are not exciting or funny enough to keep these scenes afloat to make it tonally consistent with the whiplash of the absurd solution to these problems. I think a key example to this tonal confusion is the scene between Omar and Christine while talking about the Star Shot machine, where Omar somberly tells Christine that the device is called the “Money Shot because it blows loads like a pro.” This line feels shoehorned in to drop the title of the book in the script, but any humor of this line feels off based on the context of the scene discussing failed dreams of science and relationships. For this to be one scene before a Kaiju having sex with an old man, and Christine’s pitch to her team, is a real tonal inconsistency.

Artistically the “Money Shot” #1 is strong but suffers from similar issues as the main script. Rebekah Isaacs really gets a range of emotions to draw in this book and does them all spectacularly. She really accentuates the humor in the script with facial expressions along with smaller touches and really sells the acting in the more weighty scenes. Again the sexual aspects of the book feel like they are happening almost off-screen and in between funny and erotic with the scene of Fish-Man and Christine feeling neither fully sexy or humorous, more like its happening and by that account it should be funny. Kurt Michael Russell (of YouTube fame) is a fantastic fit for Isaac’s linework and for “Money Shot” as a whole. There’s a shine to his figures that emphasized a sort of sex appeal from the main cast. Russell also flexes storytelling chops through colors between the flashback scenes but is almost too successful with the flashback scene setting up the drab life on Earth feeling a little too drab dampening the exciting start to “Money Shot”#1.

Humor, sex, and characterization all suffer from the structure of “Money Shot” #1 which is a letdown because a funny, sexy book, with compelling characters, is what readers came for in the premise and now it feels like we are edging onto something better. Hopefully, as the series goes on, Seely, Beattie, Isaacs, Russell, and Crank, can take this concept to the ends we hope and leave us all satisfied and begging for more, but for now, we are wondering if we should call “Money Shot” #1 back after one night.

Final Verdict: 6.5 – “Money Shot”#1 suffers from wanting to be a compelling sci-fi story that it doesn’t go so far enough into its central premise to be funny or sexy.