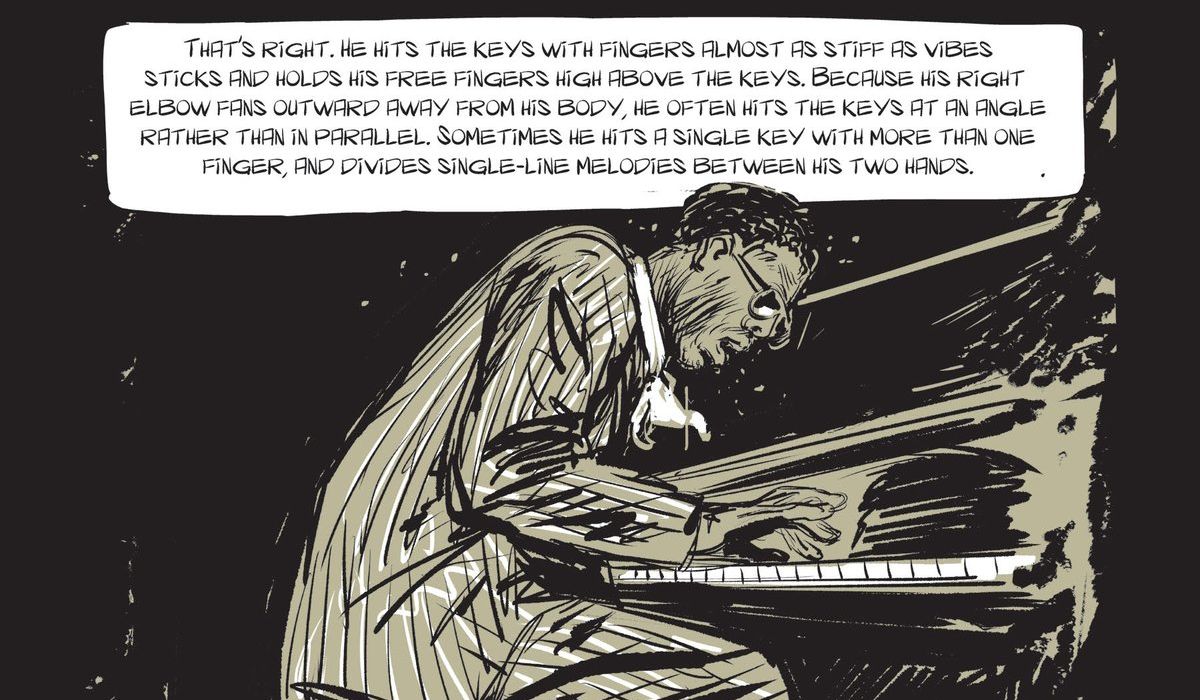 Despite them being visual descriptions of a purely auditory experience, comics about music are some of the most interesting books. To see how an artist interprets one type of art and transforms it into something totally different leads into some fascinating places. Youssef Daoudi takes the boundary-less jazz of Thelonious Monk and creates a book that very much mimics a jazz tune: there’s a head (the main melody or story), and then diversions into the interior life of this fascinating figure, before coming back to the head before the end of the story. It’s a jazz comic, and it is a riveting experience. 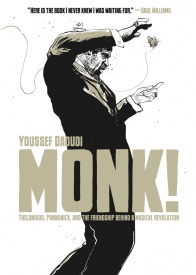 “Read this invigorating graphic narrative, then—quickly, before the spell breaks!—play one of Monk’s records.” —Saul Williams

She is Kathleen Annie Pannonica de Koenigswarter, a free-spirited baroness of the Rothschild family. He is Thelonious Sphere Monk, a musical genius fighting against the whims of his troubled mind. Their enduring friendship begins in 1954 and ends only with Monk’s death in 1982.

Set against the backdrop of New York during the heyday of jazz, Monk! explores the rare alchemy between two brilliant beings separated by an ocean of social status, race, and culture, but united by an infinite love of music. This breathtaking graphic novel by Youssef Daoudi beautifully captures the life of the “the high priest of bop” in spontaneous, evocative pen and ink that seems to make visible jazz itself.

Daoudi, wisely, decided that the best way to tell Monk’s story is to embrace his eccentricities and contradictions. This is a book that spends very little time on the minutia of his career, and instead, tries to give the reader a sense of who Monk was. He was a big hearted man who struggled with mental illness, a musical rulebreaker who was madly in love with his wife, a friend who could drive you nuts, and someone who refused to compromise his vision for anything.

So how do you depict that without audio? Well, Daoudi decided to isolate Monk as much as possible, and to illustrate a depiction of ‘his’ world, and contrasts that with ‘our’ world. When Monk is lost in his head, settings give way to blank backdrops and walking gives way to a sort of combination dancing and floating. In his world, Monk is able to do anything and go anywhere, and that is a very apt visual description for what he was doing in his music. Monk was often criticized for playing ‘wrong’ notes, but he instead tried to expand what people would accept. All 88 keys on the piano had a place for Monk, and he refused to acknowledge anything as incorrect.

The story is structured around the friendship and patronage of Pannonica de Koenigswarter, a Rothchild by birth. Her love of jazz takes her to New York, where she becomes a mama hen for all sorts of players, but Monk holds a special place in her heart. Her care for him allows Monk to find new opportunities, to have a steady income, and to not fall victim to the various obstacles that get in his way, the most serious of which is his mental illness.

Though not officially diagnosed in the modern sense, Monk was prescribed some heavy duty medication, including lithium, and hospitalized multiple times for his condition. His mental illness made him taciturn at times, difficult to work with, and unpredictable in social circumstances. Daoudi finds different ways to illustrate this, from his talking to cats to his various meetings with himself, dressed as a literal monk, replete with robe. His struggles with mental illness are never used as an excuse or blamed for anything that happened to him, but rather allow the reader to get a sense of the various sides of Monk.

On a personal level, the music of Monk has always spoken to me, and I couldn’t get over how well Daoudi managed to convey some sort of visual depiction of this incredibly idiosyncratic composer and player. If I had a modicum of artistic talent, my version of Monk’s life wouldn’t look anything like this, and that’s great. Music is one of the art forms that is most personal in its interpretation, and so Daoudi’s version of only accountable to how he hears Monk’s music. But there is enough universality in his depiction that, even if my ears don’t match his, I can appreciate and understand where he’s coming from.

If nothing else, reading “Monk!” should make every reader want to seek out his music, and to hear exactly what inspired Daoudi to create a 300 page comic about his life. I would recommend Brilliant Corners or Monk’s Music as two potential starting places, but you really can’t go wrong with anything. His playing is inspiring and forward thinking, even nearly 40 years after his death, and 50 after he stopped making music. Monk’s music will open your mind to new ideas, new techniques, and new possibilities. Daoudi’s book is a perfect accompaniment to that, but is no substitute for Monk’s uniquely tailored tunes.