Welcome to the first edition of Monkeybrain Weekly. Going forward, we’re going to be giving everyone a weekly look at what’s going on at Monkeybrain Comics, because we’re big fans of their work, both in comics and just in their practices as a business. It’s a big week to kick off on, as Halloween is bringing five new issues from Team Monkeybrain, including two debuts.

Each week, you can expect to see short, capsule reviews on each book along with a final verdict and a link as to where you can download the issue itself. Expect more exciting work with Monkeybrain going forward, and make sure to check out their bevy of books that drop each week. 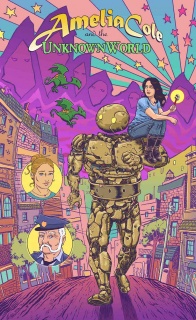 Solicit: $1.99 — Ages 12+ — Amelia Cole’s life was thrown into a blender in issue 1, and the chaos hasn’t stopped yet! As she unlocks secrets of her past, outside forces plot a dangerous course for her future! It’s more action, magic, and excitement – barely contained within 22 full-color pages! Brace yourselves for AMELIA COLE AND THE UNKNOWN WORLD issue 4, written by Adam P. Knave & D.J. Kirkbride, drawn by Nick Brokenshire, and lettered by Rachel Deering!

Review: This is one of the tougher books for me to rate because, in a lot of ways, I can see a lot of greatness in it. I love the idea and the mirror image of our own world. Amelia Cole herself is a very interesting and engaging character, and I like the blending of her magic and mundane selves as well as her trying to sort out exactly what her life is. The writing is pretty damn solid, and it provides the best part of this book.

The only issue with this book I have is the uneven art from Brokenshire. Sometimes his work is great – a good example is the very gestural Amelia as her golem blows through a wall to take out a robber – but often times, his work with people and the various denizens of this world fluctuate from “very solid” to “subpar.” Additionally, I feel like some of the buildings he has put into this world so far have been the same, as the convenience store in this issue draws an immediate recall to other buildings he’s illustrated previously. It’s enough to take me out of the story on occasion, and it’s unfortunate in some ways because Knave and Kirkbride are doing a great job of creating a strong cast and world for them to live in.

It’s definitely something I’m still interested in going forward, but something I want more from. I see enough good from Brokenshire to know that the potential is there, and I think with each passing issue he has gotten a bit better. But for now, it’s a bit limiting for the book. Overall though, I enjoy Amelia Cole, and for $1.99 will be sticking with it going forward. 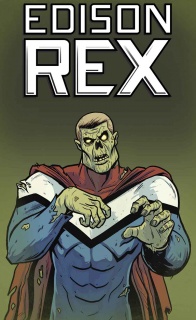 Solicit: $.99 — Ages 12+ — Have Edison Rex’s sins come back to haunt him? The specter of his defeated foe has been plaguing Edison’s restless dreams for some time. But are the visitations now carrying over into his waking life?

Review: Now this book I can unequivocally say I love. It’s sort of like Megamind but if it was much funnier and well put together. Roberson continuously builds this world of Edison Rex in each issue with little one-and-done issues, pushing us forward while still maintaining a new reader friendly structure. There is a lot about this book that reminds me of reading comics when I was a kid, from the generally good natured vibe to the backmatter (which is useful and often laugh out loud funny), and that is a huge compliment because I inarguably liked comics a lot more then than I do now (I still do, of course, but back then it was unrequited love, for sure).

Dennis Culver’s art is spot on for the tone Roberson is going for, as it reminds me of Chris Sprouse by way of Pixar. The big, boxy character models fit perfectly for the Saturday morning cartoon like vibe, especially on characters like the Bizarro-esque Defiant. This is just good comic booking, and for $0.99, what else could you really want? 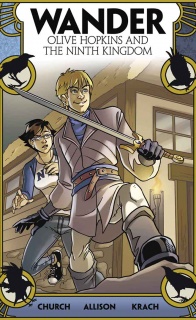 Solicit: $1.99 – The history of The Ninth Kingdom is revealed, along with why Olive is so hotly pursued. There’s also a piggy-back ride.

Review: Wander, aka Wander: Olive Hopkins and the Ninth Kingdom, is a book that is pretty much perfect for the world of digital. It’s too slight and strange to likely find an audience in print immediately (at least before it’s canceled for low sales), but when you get down to it, it’s a really damn fun book. Kevin Church, whom I know more as a Twitter personality than a writer (which I may have to go back and fix), imbues this book with a lot of spark and irreverence. It’s a quick, entertaining read, and one with a cool little world being built in its pages. In a lot of ways, it’s like other things we’ve seen before (The Guild comes to mind), but it doesn’t matter: well done is well done.

Grace Allison provides all the art, and her work is solid and hits all the beats Church asks out of her. Nothing about it really stands out, besides maybe her ability to sell jokes or the emotions of the characters. It combines well with the script, and contributes this to being a really solid book, especially considering the price of just $1.99. 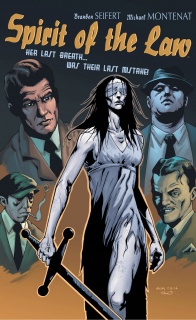 Solicit: $.99 — Ages 17+ — It’s the Great Depression, and Sammy Workman is lucky to have a job – even as a mob hitman! But when a hit goes wrong, Workman and his men find themselves stalked by the paranormal vigilante they’ve accidentally created! You’ve seen plenty of superhero origins— now, see one from the villains’ point of view! Part one of a new two-part noir/pulp mashup from Brandon Seifert, creator of WITCH DOCTOR and writer of DOCTOR WHO, and Michael Montenat, artist of HELLRAISER and PILOT SEASON: ANONYMOUS.

Review: Often, it’s difficult to handle just one genre in such a small amount of pages – this issue is but 12 pages long – but to put three in noir, pulp and supernatural in the same length? That’s playing with fire. Yet, Brandon Seifert succeeds in this first issue thanks to the solid character work and the way he uses the everyman villain as the lead. Sammy Workman may be a very bad man who kills women (or whomever you need killed) for a living, but somehow, Seifert makes him not just pitiable but someone you openly want to survive his increasingly bad situation. The hook of the story is actually less interesting than the character work to me, but it is strong enough that I find myself invested for the second issue.

Meanwhile, Michael Montenat and his colorist Ron Riley are a strong team for this type of book, succeeding in creating a moody atmosphere that is ideal for both the noir and supernatural aspects at hand. A solid book at a nice price, and something I’ll be back for when round two hits.

Visit ComiXology to purchase Spirit of the Law #1. 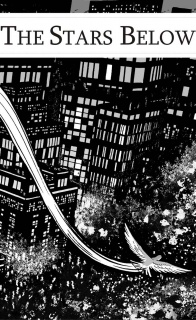 The Stars Below (one shot)

Solicit: $.99 — Ages 9+ — In the tradition of such tales as “Stuart Little” and “The Cricket in Times Square,” a young pigeon is literally swept into the Hayden Planetarium and is awed by his first-ever view of the stars. But when he finds you can’t see the stars from the streets of New York, he sets off on a dangerous quest to reach the city’s highest point – and realizes his dream in a way he never expected.

Review: I had a feeling that I would really enjoy this comic. I was not wrong, as this wordless story from Zack Smith and Rich Ellis was at times a fun little adventure and other times very poignant, and a nice little story about how even the littlest of guys can strive for more, and how sometimes there is a little wonder just around the corner for each of us. Ellis’ art fit perfect for the story, as his cast was very emotive (very necessary for a wordless story) and he did a really great job of selling some of the points that readers needed to reach for a bit more. Altogether, this is about as much as you could possibly want from a $0.99 comic, and something that I’d be glad to share with audiences both young and old. Highly recommended from yours truly, and it’s a lovely little tale that is better experienced than written about.

Visit ComiXology to purchase The Stars Below.

After a bit of a break because of holidays and other assorted things going on, I’m back with Monkeybrain Weekly, this week taking a look at the hotly anticipated “High Crimes” #1. Does this $0.99 book live up the expectations? Let’s find out below, shall we?Written by Christopher SebelaIllustrated by Ibrahim MoustafaPeople die every year […]