Welcome back to Monkeybrain Weekly. This week’s edition was a bit delayed – it was a busy week – but we’re back with a new book from Monkeybrain in the form of Action Cats! Each week in this column, you can expect to see short, capsule reviews on each book along with a final verdict and a link as to where you can download the issue itself. Expect more exciting work with Monkeybrain going forward, and make sure to check out their bevy of books that drop each week.

And remember – all proceeds from sales that were destined to go to Monkeybrain for November? They’ll be giving to the Hero Initiative. So not only do you get good comics, but your money goes to a good cause. Now on to the review! 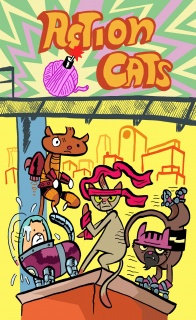 Solicit: $.99 — Ages 9+ — Meet Jetpack Cat, Aqua Cat, Rollerskate Cat, and Karate Cat — the astounding Action Cats! When action calls, they answer — unless it’s nap time, or there’s a sunbeam or a particularly active butterfly to catch. No, don’t worry, we mean it, the Action Cats will save the day!

Review: Cats are so hot right now. They’re pretty much everywhere, in memes, on t-shirts and taking over MC EIC Matt Meylikhov’s life on a perpetual basis. Now, they’re superheroes in Monkeybrain’s debut of “Action Cats” from Knave, Vogelbaum and Dougherty, and the results are cute but ultimately forgettable.

Now, I’ll be honest: I am certainly not the target demographic for this book. I’m a 28-year old male in Anchorage, Alaska, and while I like cats, I’m hardly clamoring to see them earn the superhero treatment. The story, from Knave and Vogelbaum, is a fun little one that quickly introduces the heroes and plays with cat stereotypes (“Mister Fuzzybottom” is one of the characters’ names), while merging the idea of superheroes and cats roles as pets in an amusing way. The idea that these cat superheroes would need to create distractions – like being bad kitties – to buy time so they can get away and fight giant robots is definitely a clever play on that trope.

The art from Dougherty is cute and fitting to the story, and it’s filled with a lot of energy and playfulness. Like the story and the script, it’s not really my cup of tea, but it’s certainly something that matches well to a title like “Action Cats.” While for me, it’s not something I’d ever go back to, I could see this being a hit with all-ages audiences and those looking for zany action featuring everyone’s favorite anti-social household pet.

Final Verdict: 6.0 – Browse, but if your kid loves cats and superheroes, this is for them

After a bit of a break because of holidays and other assorted things going on, I’m back with Monkeybrain Weekly, this week taking a look at the hotly anticipated “High Crimes” #1. Does this $0.99 book live up the expectations? Let’s find out below, shall we?Written by Christopher SebelaIllustrated by Ibrahim MoustafaPeople die every year […]