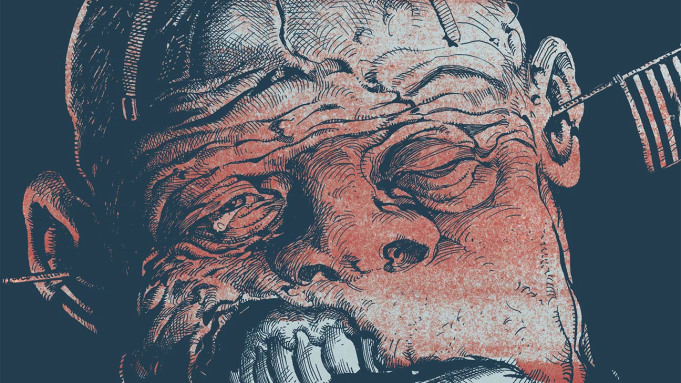 The story will sound familiar: a young man adrift in the world and unsure of his place in it agrees to join up with the U.S. military, only for scientists to use him as a guinea pig in the race to create the perfect Cold War soldier. Warping his body and mind beyond recognition, they turn the once feeble man into a hulking brute. A living weapon. Through the lens of legendary creator Barry Windsor-Smith, this well-worn superhero story trope is ground zero for an altogether different kind of tale, where the distorted monster on the cover, in all his horrific glory, is hardly the most inhuman character in the book. In fact, the ever-present single tear leaking from the disfigured protagonist’s eye is a very strong indication we should, or perhaps MUST, empathize with him. “Monsters,” out now from Fantagraphics is the sprawling, engrossing story of Bobby Bailey, and the tragic circumstances that created him. 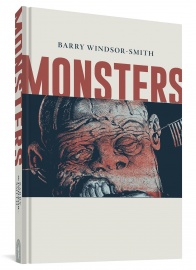 Written and Illustrated by Barry Windsor-Smith

35 years in the making, the most anticipated graphic novel in recent comics history!

The year is 1964. Bobby Bailey doesn’t realize he is about to fulfill his tragic destiny when he walks into a US Army recruitment office to join up. Close-mouthed, damaged, innocent, trying to forget a past and looking for a future, it turns out that Bailey is the perfect candidate for a secret U.S. government experimental program, an unholy continuation of a genetics program that was discovered in Nazi Germany nearly 20 years earlier in the waning days of World War II. Bailey’s only ally and protector, Sergeant McFarland, intervenes, which sets off a chain of cascading events that spin out of everyone’s control. As the titular monsters of the title multiply, becoming real and metaphorical, literal and ironic, the story reaches its emotional and moral reckoning. Monsters is the legendary project Barry Windsor-Smith has been working on for over 35 years. A 360-page tour de force of visual storytelling, Monsters’ narrative canvas is both vast and deep: part familial drama, part political thriller, part metaphysical journey, it is an intimate portrait of individuals struggling to reclaim their lives and an epic political odyssey across two generations of American history. Trauma, fate, conscience, and redemption are just a few of the themes that intersect in the most ambitious graphic novel of Windsor-Smith’s career. Monsters is rendered in Windsor-Smith’s impeccable pen-and-ink technique, the visual storytelling with its sensitivity to gesture and composition is the most sophisticated of the artist’s career. There are passages of heartbreaking tenderness, of excruciating pain, and devastating violence. It is surely one of the most intense graphic novels ever drawn.

If you’re of a certain age, Barry Windsor-Smith’s name is synonymous with ‘Weapon X’, the iconic storyline that ran in “Marvel Comics Presents” in the early 1990’s that arguably remains to this day the definitive Wolverine story. Windsor-Smith’s classically trained illustrations were almost too good for “Marvel Comics Presents,” a series that was often host to newer talent, and did not court icons such as BWS, whose work on Conan comics for Marvel some twenty years prior are almost as recognizable and enduring to the property as Arnold Schwarzenegger himself. Nevertheless, Windsor-Smith’s story about the mutant Wolverine getting his adamantium claws via some truly vicious government experiments not only enlightened fans on Wolverine’s murky past, but also made for a pulse-pounding epic about an unstoppable killing machine that you just might actually be rooting for, if only because the people being killed are worse than the monster they created in Wolverine (or “Weapon X” as he is designated). It is interesting, then, that Windsor-Smith would return to this trope so many years later, but it’s obvious the creator has much more to say. The ugly cynicism and moral bankruptcy of the United States in carrying out “Operation Paperclip” seems to be just as potent a villain to BWS as any costumed creep.

Though the character of Bobby Bailey remains the centerpiece in “Monsters,” this is undoubtedly an ensemble piece, with large sections of the book devoted to Bobby’s recruiter McFarland and McFarland’s family, Bobby’s loving mother and alcoholic World War II-veteran father, a local policeman, and the grand architect of Bobby’s misery, the ex-Nazi scientist that continues his experiments anew, now working for the U.S. military. There is no mistaking the true monsters contained within these pages – Bobby is but a sad by-product of two terrible fathers, and the malignancy that flourished within them during their time in the Second World War. This can sometimes feel like a punishing work, as BWS’s uncanny knack for letting scenes play out or have a natural feel to them work for the pleasant scenes (as with Janet’s “date” with Jack), just as it does for the more difficult ones where the very visceral and violent scenes of physical abuse are not shied away from. Still, I found myself continuing on with the story, despite the constant heartbreak and dread I felt. Jumping backwards and forwards in time throughout the book to intricately connect dots or tease out revelations, Windsor-Smith deftly weaves the narratives of these individuals in such a way you’d be hard pressed to believe it’s been almost 20 years since the creator’s last major work. In many ways I’m reminded of the television series Mad Men, a show that advertises as one thing (a period piece workplace drama), but clearly attempts to do more – attempting to be a surrealist, psychological study of “the Greatest Generation” returning from war and acclimatizing to a world almost whole-cloth different than the world they knew pre-war. So, too, does Windsor-Smith take the trappings of the superhero genre (Nazi scientists, body morphing experimentation) and subverts our expectations, telling a story about trauma, and to a lesser extent (I believe) redemption.

In point of fact, the superhero trappings of “Monsters” is deliberate for a number of reasons, but perhaps most importantly because it did indeed start as a pitch for an Incredible Hulk proposed by Windsor-Smith nearly forty(!) years ago. Blame editors for balking at the idea of a young Bruce Banner experiencing child abuse that we are blessed with this version so many years later, but BWS also shopped “Monsters” at a couple different publishers in the ensuing years, most notably crossing the desk of Karen Berger when she was the editor of Vertigo for DC. Knowing what we know now, that this is truly a work of tremendous scope, skill, and insight, I’m sure some folks might be kicking themselves for passing on this one.

For those unfamiliar with Windsor-Smith’s body of work, he’s primarily renowned as an artist, though some of his best stuff has often come when he was the primary creative force driving the project (as he is with “Monsters”). Classically trained in England, he brings an illustrative style to the often exaggerated and hyperbolic world of superhero comics. This realism grounds his work in a way that seems almost foreign to most funnybooks, but not in any dry way. A huge fan of Jack Kirby himself, BWS understands the language of comics, and it’s so thrilling to watch him mesh his style with that of other titans of the field. Certain faces and pitch perfect expressions in “Monsters” reminded me of Steve Dillon’s exemplary work (I would argue that much of the military/Nazi grotesquery here reminded me of an Ennis/Dillon joint, but I digress). Scenes of hard, driving rain look like pages right out of Frank Miller’s “Sin City.” Diary entries, long bits of well-written prose that take up most of the page, save for key bits of narratively relevant spot illustrations seem to evoke David Sim and Gerhard’s work on “Cerebus,” (which was, interestingly, created as a parody of Windsor-Smith’s run on Conan). Finally, and perhaps most importantly, Windsor-Smith seems to be channeling the spirit of fellow “Fab Four” member Bernie Wrightson’s incomparable adaptation of “Frankenstein,” with “Monsters” not shying away from Gothic horror – a Thanksgiving dinner turned tragic that rests at the narrative crux of the book being the most notable example – seems directly influence by his friend Wrightson’s style, while certainly maintaining his own. While I’ve spent some time noting the instances where BWS reminds me of other artists, make no mistake- he is a giant in his own right. There are panels of staggering beauty and complexity found within “Monsters.” We don’t often think about how things are drawn – the effort it takes to understand how lighting works, how to frame a car chase scene and make it compelling, how to repeat a dress pattern across multiple panels and pages without using computers or zipatone. These are all things that Windsor-Smith has not only thought about, but clearly mastered. If I sound gobsmacked, I reckon I should be. We often worry that a ceiling on our talent is looming, that our skill degrades over time, and that certainly can be the case, but for 71 year old Windsor-Smith, he hasn’t lost a damned step.

With this intense, thought-provoking, and profoundly sad graphic novel, comics legend Barry Windsor-Smith has put an incredible button on a career that has lasted over fifty years. A book about comic books (in a way), generational trauma, and the legacy of abuse, “Monsters” is a harrowing story that not only re-establishes Windsor-Smith as a vital creative force in comics, but turns one of comics’ most enduring character origins on its head. A hefty tome of almost four-hundred pages, and each panel a gift from an astounding talent – “Monsters” will undoubtedly warrant repeat readings and deeper dives from this humbled reviewer, and most certainly will cement the legacy of one of our medium’s finest storytellers.