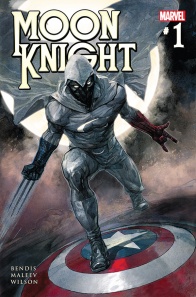 The wait is over! Moon Knight is here…like you’ve never seen him before! And we mean NEVER! The Eisner award-winning team of Bendis and Maleev tear into the mythos of Moon Knight with the same verve and derring-do they brought to Daredevil. A MARVELOUS reinterpretation of one of the most enigmatic characters in Marvel history starts right here!

The opening pages to “Moon Knight” #1 are weak. For Bendis and Maleev, uncharacteristically so. There’s a jarring feeling to the artwork; each pose feels like a caricature and the movements are bashful. Moreover, the dialogue feels thick and heavy. It all feels cliché. This doesn’t feel like the work of the duo that won Eisners for “Daredevil.” That’s what it would be easy to think when reading the opening pages, but it’s all intentional. It’s only footage Marc Spector’s TV show, ‘Legend of the Khonshu.’ This should have been given away by VC’s Cory Petit’s decision to make all the speech bubbles square, but I’ll confess, for a moment, I was slightly concerned as to what I’d signed up for.

This ‘footage’ from Marc’s series allows for a quick introduction to some of his origin story for unfamiliar readers but, it also leaves me wondering, as we haven’t seen the origin in its entirety, whether this footage sequence will be revisited throughout the series and be filled with new twists.

Following this jarring start, Bendis and Maleev’s normal service resumes. We’re given a double page panel showing Marc celebrating with a host of people at a launch party for the series. The scale of the panels on this page really work, with Maleev able to draw lots of finer details on the people at the party, which adds a livelihood to the room, a real energy. Matthew Wilson’s color work highlights Marc Spector with his unnamed female companion – he’s the star of the show, in more sense than one. This scene presents Marc with a false sense of normality. At this point, he could quite easily be mistaken for Tony Stark or Bruce Wayne, he’s just a successful man enjoying his life.

This is short-lived though, and we’re quickly introduced to Wolverine, Spider-Man and Captain America all of whom are only in his head. This revelation is saved until the final page and presents us with an unexpected twist which, with this only being the first issue, can only be presumed as the first of many. Up until this point the story had been relatively straight forward, which is not a criticism. Moon Knight having to take down a web of criminals with a dead Ultron unit in the middle, was interesting, but, with this revelation, there’s an unreliability to Marc. Now this comic, and the ones that will follow it, will be shadowed with uncertainty and that’s what separates Marc from Tony Stark and Bruce Wayne. We can no longer trust what we are seeing in the comic and we’re left wondering how long it will be before Marc realises the Avengers aren’t real.

This revelation, once known, reframes the comic too. While Marc seemed to be enjoying his success at the TV series launch, the Gatsby reminiscent questioning about his mercenary past seems to have prompted the Avenger personalities to make an appearance. Marc feels a necessity to be Moon Knight, voiced by Captain America’s “need” for him. Moon Knight presents Marc with something more in his life, something more fulfilling beyond selling his “soul” for a TV series.

As I’ve already mentioned, Maleev’s artwork in the book is strong, particularly in the double page panels. There’s a sense of fluidity and movement in the double pages which only aids Bendis’s dialogue across them, which Petit presents unobtrusively. Maleev’s scratchy pencils serve the title too, giving it grit, which works best on the night time scenes. However, some of the action scenes didn’t feel as fluid as I’d expect and at points, I struggled to comprehend exactly what had happened. This was typified with the arrival of the Mystery Power: a huge orange cloud appears above the boat, which I mistook for the boat exploding and burning. The burning of the boat doesn’t happen until the next page.

Overall, “Moon Knight” #1 is an intriguing start to the series. After a jarring start, a simple plot follows only to be complicated through the issue’s final page revelation, one which I hope is a sign of things to come.