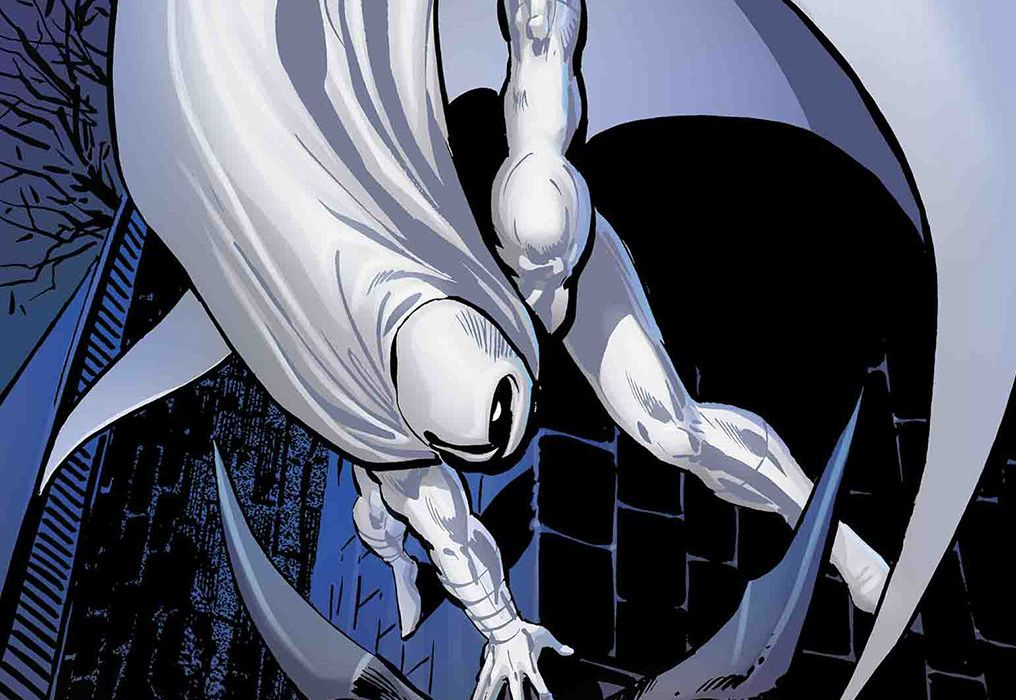 Max Bemis’ run on “Moon Knight” comes to a close with issue #200. Beginning as a Legacy title, has it lived up to the initiative or has it floundered under the weight of its own ambition? Read on, dear readers, and beware, there be spoilers ahead. 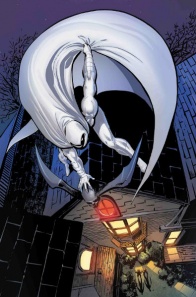 DARKEST NIGHT!
• MARC SPECTOR comes face-to-face with his demons!
• Old enemies return!
• It’s a celebration of 200 issues of the multifaceted MOON KNIGHT with an oversized anniversary issue you’d be crazy to miss

For a couple pages, I was ready to like issue #200. The tight focus on Sun King & Truth in the mental hospital was reminiscent of the best parts of the first issue and the impenetrable wall of text coming from the unseen psychiatrist’s mouth served as a function within the story, placing us with them to experience how they experienced it. It’s a great callback to issue #188 and as a marker for how Sun King has changed since then. But then the flashback ended and the story became about as impenetrable as the dialogue. What happened in this arc is a mystery to me and I’ve re-read the whole thing twice over.

The dialogue only half makes sense, half of the time, appearing as walls of text that never coheres and overwhelms the artwork. In “Moon Knight” #200, the best example of this is Sun King’s rant during the battle, where he attempts to wax philosophically about the how he and Moon Knight are the same, connected through some unbroken chain via religions back to the Ancient Egyptian pantheon. Maybe it’s not supposed to make sense. Maybe that’s the purpose but there is not enough evidence of intentionality for that to be anything but conjecture.

Throughout this run, but especially in this issue, there’s the sense that Bemis never understood how Moon Knight functions or how best to express the themes he was trying to bring out. A big theme of Bemis’ Moon Knight run is mental illness, how those with mental illnesses manage them, and the stigmatization of them within society. There is also an attempt to discuss them in relation to the superheroic side of things but that’s so muddled that I won’t be able to dissect it in any meaningful way. Part of my hesitance there is because I know very little about D.I.D and as such, can’t comment on how well this version of Moon Knight represents it (best guess, better than some, still not good enough.)

From a story perspective, however, he misses the mark in his portrayal of the competing identities within Spector’s head. Jake is the most dissimilar to Marc, even though there isn’t much evidence as to what Marc’s personality is as he is never given the opportunity to display it, instead being pitted against Jake & an increasingly ludicrous but highly creative series of villains. The rest of the personai are just kind of there and speak with such similar patterns and tones that the only reason I could tell them apart was because of Petit’s lettering and, well, their appearances.

Speaking of appearances, no disrespect to Davidson, but I firmly believe that Jacen Burrows was the perfect artist for this run on “Moon Knight.” His style is highly detailed, sharp, and brutal, while still remaining grounded through excellent figure work and a tight control of framing. It tempered the wilder parts of Bemis’ script and reigned it in to being something coherent and paced well. Davidson’s style is better suited for embracing the wilder aspects, turning them up and leaning more into the surreal than the horrific. That works fine but by transitioning between these two styles within “Moon Knight” #200, the comic invites comparisons, putting Davidson’s looser, more impressionistic style at odds with Burrows’ pages.

Davidson’s best moments here lie in his environment and the depictions of non-humans. His depiction of Ra feels imposing, with the sun behind him, as if we were looking at a painting superimposed on the real deal. Additionally, when he has to draw a sprawling, chaotic battle, he’s mostly able to keep a throughline on the page, retaining clarity within the chaos. However, his foreshortening often leaves hands looking like the sizes of bowling balls and figures, especially Diatrice, looking like bobble-heads. The Sun King gets this the worst, with a chin that juts out three sizes too far. Moreover, while he is great at portraying action and destruction, especially on those two-page spreads, when he has to portray softer emotions, he comes up short.

When Mark is given the Jeff Lemire drawing by his daughter, his face afterwards isn’t one of a proud father but is the grin of someone who’s about to take pleasure in beating the pulp out of someone. Part of this seems to be that he wasn’t given enough that played to his strengths. The weirder moments, like the “fake” flashback given to Marc by Truth, were hilarious because of Davidson’s art and, like I said earlier, his art is more suited to something more surreal. We don’t get surreal here, only action, and while it’s passable, it’s not very engaging.

I also want to talk Spector’s Judaism because Bemis brings it up numerous times in this issue but does jack all about it. Spector’s connection to Judaism is not in question nor am I here to say that he is “not Jewish enough,” a phrase I hate and reject with every fiber of my being. What I am saying is that Bemis’ portrayal of Spector’s Judaism is window dressing instead of a core feature despite the comics’ insistence that it’s the opposite. He is not connected to the religion nor the culture at the moment but we don’t see why, we don’t get the interrogation of what that means for him. Does he think about those things? What about his upbringing, which we’ve seen in this very run, effects who he is today?

What about his connection to Khonshu and the Egyptian deities in relation to his Judaism? Much of this could have been an interesting dive into who Marc is, who he thinks he is, and what identity means to him. The fluctuation and mutability of identity is core to who Moon Knight is and so this would be the perfect place to go from. Instead we get a cavalcade of imaginative, almost fully-formed villains, that come and go and lead to a big fat pile of nothing. Sun King even starts to touch on it during the speech I mentioned earlier but he does it in a roundabout way that was actually just a set up to a joke later in the comic. The joke lands but with a sour taste in my mouth.

Worst part is, Ernst, the Nazi from Marc’s childhood who traumatized him, is also the “villain” of this final part but his plans are Henry Bendix levels of intricate and insane (yes, I get the irony) but without any of the careful dialogue or plotting of Warren Ellis. What’s his plan besides wanting to fuck with Marc? I don’t know and the comic never does enough with him, or with Sun King, to really make me care.

There’s no sense of Legacy either. This was apparent from the start. On a meta-level, it’s funny, because the legacy numbers imply that this is part of a longer work instead of something brand new, and thus the interstitial nature of each arc works well. However, because it has no connections to the Lemire run, or the Bendis/Maleev, or the piecemeal Vol. 4, or anything that came before, it makes for a frustrating read, only concerned with creating something new and pushing aside the past for a reinterpretation that didn’t gel.

In the end, “Moon Knight” #200 caps off Bemis’ run on the character in perhaps the only way it could’ve: by bringing back the best thing he added to the franchise and the only character he ever seemed to fully-flesh out, Sun King, and then letting the rest of the story resolve itself with twists that came out of nowhere and a happy note that doesn’t feel nearly earned enough.

Final Score: 2.5 – In a run with moments of brilliance, the conclusion drowns them all out with a nonsensical story without a satisfying resolution, art that is mostly, technically fine but clashes with the tone, and a main character that was less developed than one of his antagonists.