At first, I wasn’t sold on the upcoming Disney Plus. I love Disney as much as the next guy, but come on. Another streaming service? If every company makes their own streaming service, it would seem that a bunch will probably fall by the wayside. I don’t know if this is sustainable or how it’s all going to work out long-term. That being said, of course I’m getting Disney Plus. You had me at The Mandalorian. If that alone isn’t enough for you, look at all the Marvel content coming down the pipeline. The Sensational She-Hulk will soon grace our laptop screens. Still not sold? Well, I have two words for you, my friend. Moon. Knight. 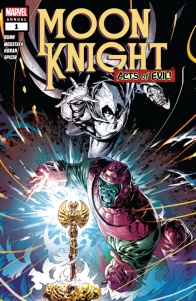 Written by Cullen Bunn
Illustrated by Ibrahim Moustafa & Matt Horak
Lettered by VC’s Joe Sabino
Colored by Mike Spicer
MOON KNIGHT BATTLES KANG THE CONQUEROR! KANG THE CONQUEROR has found a way to rewrite history in his own image! But when the chance to settle an ancient grudge against the Egyptian god, Khonshu, tempts Kang, the process is interrupted and time and reality quickly go haywire. Now, Khonshu’s avatar, Moon Knight, must find a way to fix the time stream before Kang is able to complete his goal! But with time acting erratically, there’s no telling where Moon Knight will end up – or WHEN!

Personally, I can’t wait for Disney to give us the adventures of Mr. Knight. I have absolutely no idea what to expect. Whatever he ends up doing, Khonshu willing, he’ll wear the pristine all white three-piece suit. Still though. I mean, will he hunt werewolves? Punch ghosts? It’s impossible to predict, the character has done it all. In “Moon Knight Annual” #1, he does the unexpected yet again when he takes the fight to Kang the Conqueror of all people.

It’s a fun showdown too. Full of colorful superhero action, fisticuffs and time-travel shenanigans. Artists Ibrahim Moustafa and Matt Horak do a solid job drawing Moon Knight vs. Kang. The fight extends to followers of both Khonshu and Kang and it’s cool seeing all the different takes and interpretations on the same theme. Especially all the different era Moon Knights. Some of my personal favorite designs are the WWII, Mesopotamian and Spartan Moon Knights we see but they’re all good, all delightfully violent and ready to sock Kang in his face.

At first glance, this might seem like a completely random pairing of characters, a match-up out of left field. It definitely came across that way to me. Kang the Conqueror is a time-traveling warlord while Moon Knight is a street-level crime-fighter. Kang is one of the most deadly villains in the Avengers rogue gallery. While Moon Knight was on the ‘West Coast’ and ‘Secret’ Avengers (who hasn’t been on an Avengers roster at this point?), he can only loosely be associated with the team.

Both have a strong connection to ancient Egypt, however. If this issue didn’t make it clear, Moon Knight is the avatar of the ancient Egyptian deity, Khonshu, while Kang rose to power in ancient Egypt as the Pharaoh, Rama-Tut. It’s very intriguing how writer Cullen Bunn connects two vastly different characters like that and adds to their mythos.

One strength of this issue is the characterization of Khonshu. The ancient entity is at his best when he’s both the angel and devil on Moon Knight’s shoulder. You can’t judge a book by its cover but if the giant bird skull makes you feel uneasy, you’d be right on the money. Khonshu’s not a ‘nice’ god, there’s something sinister there. As his avatar, Marc has Khonshu’s favor but in this issue, it’s implied (if not outright stated) that Khonshu considers his avatars to be very expendable. The Egyptian god even gets an upgrade this issue. He is no longer just the protector of travelers, but time-travelers as well. Khonshu considers the time-traveling Kang the Conqueror his child. It’s only when Kang gets too big for his britches that Khonshu sends his avatar into conflict with him.

The titular character also has a strong showing in this issue. Marc serves Khonshu but, for good reason, is very wary of him. He isn’t blindly devout, he questions his benefactor every step of the way. Moon Knight never gets up either. Sure, he’s not as powerful as Kang but being a nuisance? He’s got that covered. The resilient anti-hero dogs Kang up and down the time-stream, getting help from the stubborn avatars to come before him. In true Moon Knight fashion, his victory is bittersweet as well. To win the day, he’s sentenced another ancient Moon Knight to a lonely existence outside of time. Khonshu’s happy though, so the show goes on…

Cullen Bunn writes a great Kang too. I really enjoy the character, not because of how dangerous he is, but because he’s kind of a failure. For all his talk of greatness and conquering, does the guy ever actually win? He can’t beat the Avengers, he can’t even beat a bunch of regular Moon Knights. Completely mastery of the time-stream (or disregard, depending on how you look at it) and Kang can never pull out a victory. He’s a petulant child, screaming that he should be able to do whatever he wants with time, have whatever he likes. He’s also completely full of himself in the best way. He gets his butt handed to him every time but thinks he’s greater than a god. That’s Kang at his best.

Final Verdict: 7.5 – Come on outside, Kang. The Moon Knights aren’t going to jump you, they swear.