A half century after Neil Armstrong took that “one small step for man, one giant leap for mankind,” Jonathan Fetter-Vorm revisits the events that birthed all that led up to that historic July 1969 moment in richly drawn and researched detail. 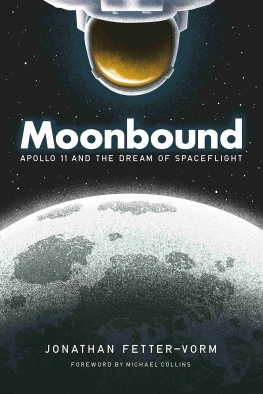 On a summer night in 1969, two men climbed down a ladder onto a sea of dust at the edge of an ancient dream. When Neil Armstrong and Buzz Aldrin first set foot on lunar soil, the moon ceased to be a place of mystery and myth. It became a destination.

Now, on the fiftieth anniversary of that journey, Moonbound tells the monumental story of the moon and the men who went there first. With vibrant images and meticulous attention to detail, Jonathan Fetter-Vorm conjures the long history of the visionaries, stargazers, builders, and adventurers who sent Apollo 11 on its legendary voyage.

From the wisdom of the Babylonians to the intrigues of the Cold War, from the otherworldly discoveries of Galileo to the dark legacy of Nazi atrocities, from the exhilarating trajectories of astronauts—recounted in their own words—to the unsung brilliance of engineers working behind the scenes, Moonbound captures the grand arc of the Space Age in a graphic history of unprecedented scope and profound lyricism.

What a time it was to be alive in the Summer of 1969.  The Mets were making a run for their first World Series win.  Over in upstate New York, Woodstock brought together 400,000 attendees for three days of peace, love, and music.  A nondescript bar in New York City’s Greenwich Village gave birth to the modern gay rights movement.

And three men took off in a rocket from Florida and traveled hundreds of thousands of miles away to place their foot on a distant world, until then the subject of myth, mystery, and distant observation and reflection.

There’s no shortage of commemorative literary works celebrating the Apollo 11 mission, and as such, Fetter-Vorm’s work enters a very crowded market, particularly this year as we celebrate #Apollo50.  Like last year’s “Apollo,” “Moonbound” explores the story behind the story of the moon landing: the men, the women, the events, the decisions, all which led to that fateful moment on July 20th, 1969. What made “Moonbound” different (and I will argue, more compelling) is its decision to focus on the pure scientific aspects of the story, but not necessarily the three astronauts in that capsule. All the influences that led up to that moment are the stars, illustrating how much work over many years – – hundreds even – – led up to the mission.

From Renaissance astronomers such as Kepler and Galileo to the “computers” that Hidden Figures made famous to the woman that could have pre-dated Sally Ride in space, Fetter-Vorm weaves these disparate stories into the fabric of the mission, flashing between that past and the present events to make those connections.  He builds tension beautifully in chapters that outline the US-USSR space race, makes your heart break alongside that of Deke Slayton when his heart condition grounds him from space travel, and introduces you to players whose names could have been lost to history but made just as much of an impact on Apollo 11 as the astronauts in that rocket. And if you’re interested in the science of spaceflight, Fetter-Vorm does his homework of the physics of rockets and spaceflight, explaining concepts like the precise dance to put a man on the moon and bring him back in careful but not overly technical detail.

It’s certainly an in-depth look at all that could be considered part of the Space Age. And it’s certainly hopeful and optimistic in tone. But perhaps too much of both of those, particularly when it comes to U.S. events.

Indeed, Nazi Germany and Stalin’s U.S.S.R, and all their associated horrors, are on display, but secondary to the stories of the men that were part of those eras and part of the development of manned space travel (Wernher von Braun and Sergei Korolev, respectively). The United States civil rights movement, itself progressing in tandem with our march to space, ends up being a bit more than just a footnote  – – though Fetter-Vorm does mention what social media would call today #NASASoWhite in the epilogue.  Fetter-Vorm also downplays the role of the media in the American spaceflight movement.  This was a criticism I had with Nate Powell’s “March,” and while it does receive some treatment here, it’s more implied than overt.  Any look at a major historical event or movement from the mid-20th century needs to have this examination of the role television played within it, and that does not happen here – – an ironic choice for a visual medium.  Inevitably, these are all editorial decisions; one can only include so much information before it becomes too much on any level to read. I’m a little less forgiving about these transgressions with American history though, for they are nearly nonexistent throughout “Moonshot.”

The greatest disservice comes in the treatment of “the fire:” the Apollo 1 mission that never got off the ground, resulting in the death of three astronauts.  The effects this incident had on our fledgling space program were so profound: changes in emergency preparedness to redesign of the command module to the Congressional investigation that could have grounded our space program for much, much, longer than the 20 months it was offline.  It rightfully deserved its own chapter, not a few pages in an afterthought to a story about the Cape Canaveral chef cooking breakfast for Armstrong, Aldrin, and Collins.

In looking at artwork, I’m reminded time and again of Nate Powell’s approach to the “March” trilogy: rich in detail, balancing of text and pictures, the power of the full page (or two page spread) to provide artistic moments meant to stick in your memory. He wisely chooses to keep lettering uniform throughout the work: readable but not distracting from the artwork.  It’s reminiscent of Golden or Silver Age comics that had such precise block lettering, evoking the tone of what a comic about the moon landing published in that era could look like.  Switching up color palettes from four color for the events of July 1969 with monochromatic ones for earlier moments in history easily distinguish between what is past and what is present. It keeps the two time frames – – past and present – – distinct from each other, but not so much that reader remains lost in the shifts from 1969 to eras past.

The star of this entire work are those spreads: sometimes full page, sometimes two pages, but serving well just what they should do, that sense of speechless wonder: the takeoff of Apollo 11 from Florida, the view of that pale blue dot from the LEM module, that first close-up of the moon’s surface as they land on Tranquility Bay.  Whether it’s the detail on Tranquility Bay as the LEM makes its landing, or the smallness of Earth from space, the art serves the goal of bringing forth the wonder that comes from being a pioneer to a new land.  And in these moments text holds back, proving that adage of “a picture speaks a thousand words,” as well as illustrating (pun intended) the skill Fetter-Vorm has as both writer and artist, when and how he uses each medium to its greatest effect.

I’m a child of the Challenger era, so I really didn’t grasp the amount of American pride and optimism that came with the moon landing until Mad Men covered it in seventh season in “Waterloo.” As Fetter-Vorm reminds us in the epilogue, it’s an optimism that didn’t last. It’s one that he (and others) wonder if it will be captured again, particularly as space travel becomes the playground for the corporate elite or a tool for weaponization — things the Apollo astronauts certainly did not have on their minds as their goals in 1969. (That latter thought became one step closer to reality not too long ago with Congressional approval for the oft-joked “Space Force.”)

But the moon remains, enduring, never changing, ever present.  And perhaps as long as we take the advice of Neil deGrasse Tyson and “keep looking up,” the possibility of recapturing the elation and enthusiasm from that Summer of ’69 will wink back at us on this pale blue dot.