The book that seems like an outlier in Image’s publishing slate gets another issue. Does it prove its worth at the comics industry’s largest independent publisher? Read on to find out, but beware of mild spoilers! 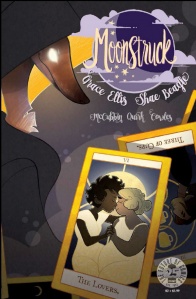 Julie, Selena & third-wheel Chet go on a werewolf-y date to a shady magic show. Something TERRIBLE happens, and for once it’s not Mark or Lindi’s fault!

Full disclosure: My primary interest in “Moonstruck” initially came from the fact that it’s being published at Image. I tend to like Boom’s output far more than Image’s, and by all means, this is a book that fits right into Boom’s publishing slate. Two of the creators on this issue, Grace Ellis and Kate Leth, have found great success at Boom, and the others are largely unknown at this point. There’s a great diversity in the cast, which Boom books often strive for and which Image books often do not. Then there’s the overall concept and upbeat slice-of-life tone, something rarely found at Image. When the first issue came out, there was a sudden burst of angst and despair at the end, which fit my conception of what an Image first issue should be. So how does this second issue fare, now that we’ve gotten past the introductions?

Well, I enjoyed it enough that by the end, I completely stopped focusing on what made sense at what publisher and fell exclusively into the story.

This issue seems like Ellis is truly creating the story that she wants to write with “Moonstruck.” In the first issue, it seemed to me like she was following a first-issue formula, and any attempt to go darker than the series wanted to resulted in an awkward confluence of styles. Here, though, it seems Ellis has figured out how to balance her strengths of the everyday interactions with the darker elements.

For instance, the scene towards the beginning of the issue where Julie’s tail shows didn’t seem forced or shoehorned in. It felt like the natural progression of events, completely in character, where it came directly out of one situation and lent weight to the next one. Likewise, while the scenes at the magic show get dark and creepy, and while the end-of-issue twist will have devastating consequences, they fit right into the story because of the situations they were melded with. The magic was allowed to be dark because it happened on the true-to-heart date, and the cliffhanger could be so realistically devastating because of the comic relief we came to relate to that character. In the end, the balances of tones work to both validate and enhance each other.

Right off the bat, though, Ellis has created an instantly inviting world. “Moonstruck” is filled with colorful characters, from a werewolf to a plant-person to a gorgon to a living ghost. The book is fully inclusive, and not just because some of the characters are mystical beings. All three of the leads in this issue fall under the LGBT umbrella, the issue focusing on a lesbian date with a genderqueer third-wheel along for the ride. The inclusivity is embedded into the story without necessarily being a point in itself. We simply see the everyday lives of these characters who happen to be queer. That they also happen to be anthropomorphized animals and mythical creatures only helps illustrates the inclusiveness.

Another big part of what makes “Moonstruck” so fresh is Beagle’s art. They employ a soft style which places importance on round lines, creating an inviting atmosphere. The only sharp angles to be seen are strategically placed, like a few small elements of Chet’s outfit, balancing out the feminine roundness of the genderqueer character with some masculine angles. On occasion there are even parts of panels that one would expect to be angular, like a building or a car, but which are distorted by perspective so they can appear rounder. The coloring by Beagle and Quirk solidifies the atmosphere, sticking to a wide variety of muted colors which represent the “Moonstruck”’s wide world without getting too wild.

At the same time, Beagle isn’t afraid to mix up the conventions of their style. While they often stick to rectangular panels, they occasionally distort them to make the borders between panels rounder. This ends up accenting certain moments, like flirty exchanges between Julie and Selena or certain parts of the magic scene. Additionally, there are points when high-stakes situations occur where Beagle leaves some sketchy lines around a character. Near the beginning, when a car almost hits Julie, the soft inks defining both her body and the car turn sketchy, showing both the abrupt stop of motion and the character’s anxiety in the moment. The small touches like this that Beagle adds never stick out awkwardly and always add to the scenes.

Regardless of where it ended up being published, this issue shows that “Moonstruck” isn’t concerned with adhering to the expectations of any company or any reader. It is and always will be completely its own thing. And that thing is a creative, inclusive slice-of-life fantasy story that anybody could enjoy.

Final Verdict: 8.0 – Something unique for Image, this LGBT positive tale comes into its own with this issue as a fun slice-of-life book with some gripping mystical elements.