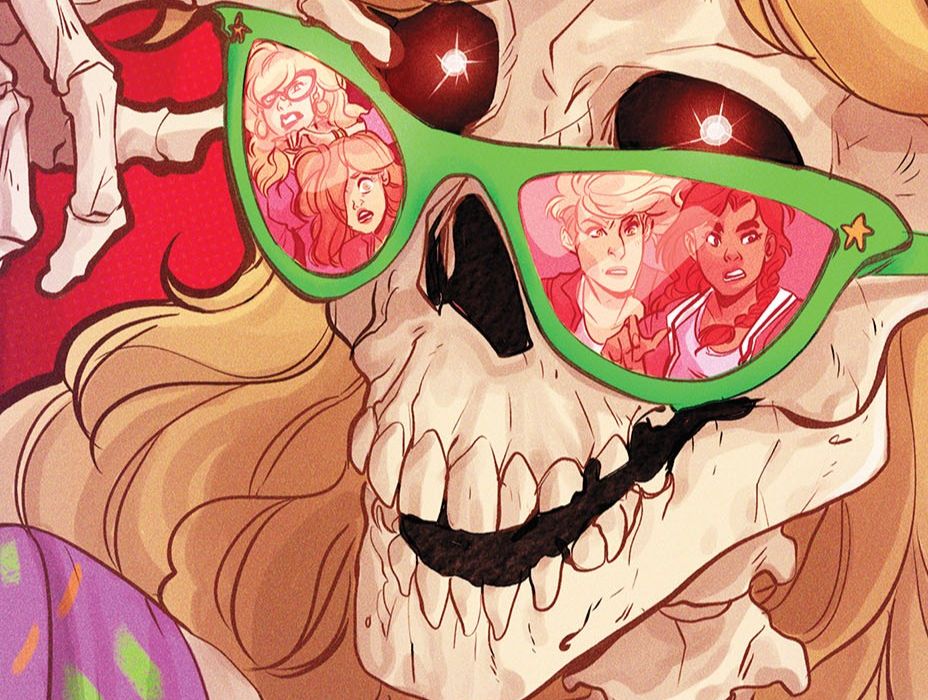 The Stranger Things formula has proven to be quite popular of late. Set something in the eighties, have an apocalyptic scenario dangling in the future, and add a group of unlikely heroes coming together to stop it, and you’ve got yourself a hit. Under the guidance of “Kim & Kim” collaborators Magdalene Visaggio and Claudia Aguirre, however, “Morning In America” #1 looks to be something quite different. Will the team find new ways to explore this setting in their debut issue? 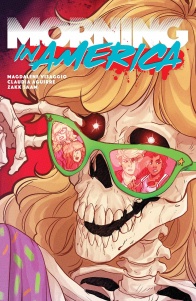 A new Oni Press miniseries by powerhouse team of Magdalene Visaggio (ETERNITY GIRL) and Claudia Aguirre (KIM & KIM)! The year is 1983. A series of disappearances afflicts Tucker, Ohio following the opening of a mysterious new factory. But when the town finds itself under siege from strange monsters, it’s up to intrepid girl gang of no-account teen girl delinquents to try and figure out what’s happening — and save everyone’s lives before it’s too late.

The comic focuses on the less-than-heroic bunch called The Sick Sisters, but this issue we get to spend the most time with Nancy. Visaggio has worked out a good voice for her as the rebellious queer lead of the story, having her remark at her friend Ellen’s sexual escapades and lobbing a bottle at a group of misogynistic onlookers. On its own, this would make her an interesting enough character, but Visaggio goes further. We find out that Nancy’s parents are in a troubled relationship hurt by Nancy’s father’s unemployment. Yet, Nancy doesn’t appear overtly angry with them, rather she acts quieter and timid, as she’s really worried for them. On the other hand, we see seeds of a relationship between Nancy and Veronica at school, showing a more affectionate and passionate side of her, and also for her friends. Visaggio ensures that Nancy is a fantastic vocal character for readers, and gives her suitable complexities to keep her compelling.

Let’s look at how the broader world fares. The issue opens with a bold statement when announcing The Sick Sisters – there’s only one week until the end of the world. Visaggio makes good on that promise too. No one explicitly knows anything about this, but there’s a constant sense of unease in the air. Althought The Sick Sisters are content whenever they are together, they feel a little uncomfortable when they are separated. With their latent reputation as cigarette dealers, they also attract ne’er do wells aplenty, like the one that hassles Nancy gives off a very The End Is Night feel. The talk about missing children also gives a sense of dread to the comic, increasing throughout the script as we find out the head of police refuses to do anything about it, even rebutting the hopes of a long-time officer. Visaggio uses all these elements to instill a very real sense of chaos, lending a lot to the apocalyptic tone that is suggested in the early issues, and it’s terrifyingly fun to get swept up in.

“Morning In America” #1 feels vibrant and desolate all at the same time, which is all thanks to Claudia Aguirre’s terrific illustrative work. At first glance, the book feels very teen drama-oriented and playful, due to Aguirre’s figure work and high school environments. The members of The Sick Girls all look unique, yet all look believable proportioned and age appropriate. Aguirre infuses them all with a terrific sense of style. I can’t decide whether I love Veronica’s bomber jacket and windswept hair, or Ellen’s high-waisted pants, leg warmers, and clear-framed glasses combo, but I know that I love everything that these characters boast. The typical school settings are present, too, and are vibrant and interesting. I love the open gymnasium that the gang starts the day in, especially the grid-like frames on the rooftop because it’s a detail that occurred so often in that era and setting. The locker rooms are also a comfortable and familiar transition setting, as it doesn’t look out of place but give the characters and story a sense of movement and momentum.

However, start to look closer and you’ll see the darker side of both of these aspects that lines up with the underlying apocalyptic tone. From the very start, the back alley that The Sick Sisters hang out in is a rundown garbage area, with stacked up boxes and graffiti abound (admittedly, we do see Ash herself contributing to this aspect. Cleverly, we see this setting pan out a little later to reveal a more foreboding grey sky above, something which permeates every scene with its lingering misery. We also have Nancy conduct her… cigarette deal in a back alley of the school. Aguirre decorates the scene with clever details like decaying trees, morbid amounts of concrete, and more garbage bags. Similarly, we don’t always see the characters in their pitch-perfect school attire, nor are they always rebelliously chipper. Nancy’s constant facial cynicism, combined with her disheveled mannerisms towards the end of the issue feel wholly appropriate to the tone. Aguirre adds these little details to keep up the sense of unease in Visaggio’s script, showing a totally synchronized writer-artist relationship.

Aguirre handles colors also here, using a palette that feels like a very washed out and era-appropriate pastel. I love how Aguirre textures here shading and coloring, as it feels more layered and painterly than straight cel-shading, but still feels hard enough to give off a cartoon feel. Aguirre also cleverly plays with contrast in different scenes. The interior school scenes are more brightly lit and vibrant, giving a sense of safety and security inside the halls. However, whenever a scene is set outside, Aguirre makes sure the cloudy sky is constantly felt, giving a desaturated look to everything. These two are blended well in the final scene when the gang gets a ray of inspiration from Nancy. The depressing grey of the clouds is still present, but the warmth of indoor lights and an unseen sun still glows through to give a feeling of hope.

“Morning In America” #1 proves that nostalgia still can be used in interesting ways. Visaggio puts forward a cast of unique characters with terrific chemistry and Aguirre gives them a liveliness and infectious buoyancy. Both of them work well with each other to convey an underlying sense of dread, through scripted and visual storytelling, resulting in a debut that feels fun, relevant and somehow vintage at the same time.

Final Score: 9.0 – A terrifically character-driven debut, “Morning In America” #1 will keep you on edge with an underlying sense of unease, but charm you with its diverse cast.