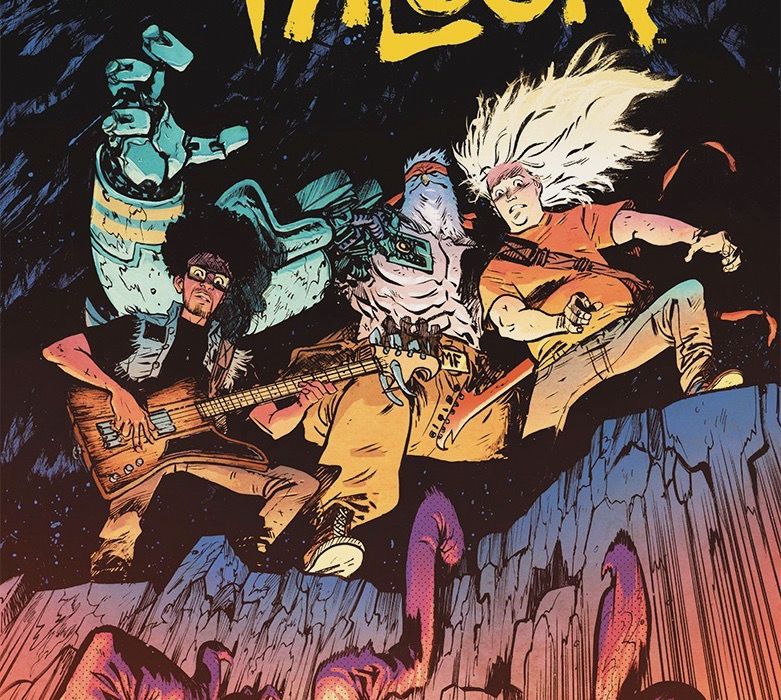 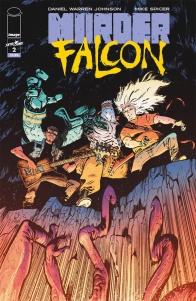 Metal doesn’t happen with just one man… and neither does saving the world! As monsters attack the city, Jake and Murder Falcon must recruit a bassist to join their fight. Luckily, they know a guy.

Personally, I’ve never been a metal-head. In fact, I’m the kind of guy who professes to like all kinds of music, but conspicuously omits heavy metal. It’s just never clicked for me. Still, I respect the passion of its fans and totally get the appeal. I point this all out to say, you don’t have to be a shred-head to dig “Murder Falcon,” but it probably helps. Either way, creator Daniel Warren Johnson’s passion for all things metal is readily apparent and completely infectious.

The book’s underlying premise is delightfully simple. Empowered by the “darkest parts of humanity,” a horde of horrific monsters from another dimension (the veldar) are streaming through a tear in the fabric of space-time to wreak havoc here on earth. Murf, the titular Murder Falcon, sums up the rest like this: “The only way to drive them back is with the very thing that defies the darkest side of all people. Music.” Meaning, of course, heavy metal.

Typically, this is where the reviewer says something like, “Admittedly, it’s a wacky set up, but suspend your disbelief and just go with it, because this book is pure fun.” In this case, that’s partially true. Yes, this book is a blast, but it isn’t merely that. You don’t have to check your brain – or your feelings – at the door. There are plenty of brilliant splash pages, lots of great dialogue and moments of balls-out action, but there is depth and sophistication, too. The characters aren’t just types or cardboard cut-outs. They’re flawed, multilayered and wonderfully human.

True, we don’t yet understand why Murf is on humanity’s side and what exactly brought him to earth in the first place, but in terms of the protagonist Jake and his bandmate Johann, we get a surprising amount of nuance and emotional depth. It’s not just all kung fu and shredding, Johnson gives us reasons to care. He also gives us plenty to look at.

Intriguingly, though this book is clearly rooted in super hero tropes, Johnson’s art style is not typical of that sub-genre. His inks have a looser, more spontaneous, almost indie quality to them. The lines are assertive and well defined, but tend to feel more organic and less formalized than most high concept works. It definitely helps that his character designs tend more toward “every man” than they do “Super Man.” Murf is definitely yoked, with a high tech cybernetic arm, but Jake has a round face and paunch. He long hair is a little stringy and his arms a bit too flabby. He definitely looks like a guy who might have fronted a decent band back in the day, but hit a rough patch somewhere along the line and never fully recovered.

Character designs aside, Johnson’s panels are packed with detail and subtle, entertaining touches like record store dividers that simply say “Death” for the genre and curious kids peering over the back of the booth, eavesdropping on our heroes as they chat at Burger Town. The colors, by Mike Spicer, are also amazing.

Jake’s plain orange t-shirt is a simple but inspired choice that makes him instantly recognizable wherever he might be in the page. The van is also killer with its bright blue paint job and garish orange stripe. From neon pink to turquoise and everything in between, Spicer doesn’t hold back, delivering a vibrant palette that keeps the energy high, especially when Murf punches a hole in the record store wall and the trio descends to a mysterious underground realm. There, it’s a riot of color, like a black light poster come to life, with incredible blues and purples, violet and magenta. The action is intense, the colors are off the charts, and the lettering is fantastic, featuring pretty much every sound effect known to humankind and unsubtle phrases like, “Louder than an atomic bomb” scrawled in the background. It’s funny, it’s in your face, and like the random bit of graffiti scrawled on the dumpster in the alley behind your favorite club, it’s all part of the ambience.

It’s not black leather, metal studs and wallet chains, but it’s absolutely metal as hell. Or, as Johann proclaims after listening to Murf describe the origins of the mythic instruments that will give the band their power, “How epic is this? The Heavy? Magical kung fu instruments? This is my jam!”