As this mini series draws to a conclusion, lets take a look and see if a great premise can carry through to ensure a fantastic finish. 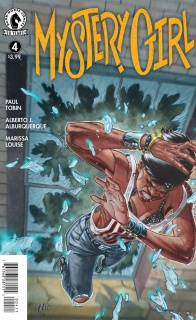 Trine may be down for the count, but she’s not out yet! Left for dead in a frozen Siberian wasteland, she has already solved the mystery of how to survive—the bad guys just don’t know it yet. And when she gets back to London, one shadowy group’s misdeeds will be brought to light.

Things move fast in Trine Hampstead’s world. In three short issues she’s managed to get recruited by a scientist to help search for missing mammoth remains, negotiate a research trip to Russia, charter a plane to Siberia, and uncover a series of mysteries so convoluted they could probably lead to the start of an economic revolution of sorts. Now, as her first mystery reaches a climax, we find her hot on the heels of the mysterious gunman Linford, and fast unravelling the strings of a global conspiracy.

Tobin and Alburquerque seem to have set out to truly push the boundaries of what’s achievable in a mini series as far as sheer volume is concerned. They’ve managed to traverse countries, introduced a host of supporting characters, and ramped the stakes up from kitchen sinky drama to world-threatening thriller. This story hinges on it’s protagonist, the enigmatic and happy-go-lucky Trine, who flits through life from one moment to the next, the physical incarnation of ‘living in the moment’. But, while her special skill, an unerring but vaguely defined ability to see the solution of any ‘mystery’ without fail, made for a very appealing strapline to the first issue, I found that, as the series continued, Trine’s greatest asset became, for me at least, one of the story’s main weaknesses.

Any good mystery series relies on getting the balance of information release just right. From Sherlock Holmes to Bruce Wayne, detectives have always relied the careful collection of information and their deductive reasoning skills, along with a little bit of luck, to solve the case, so the idea of a character who flips all that convention on its head by just instinctively knowing the answer to any mystery definitely intrigued me. However, if you’re going to have a character who finds her work so effortless then you’re going to need something new to crop up that challenges her in a different way.

That’s the part of the plot that seems to be missing from ‘Mystery Girl’. Throughout the series Trine has barrelled headlong from one set piece to another, confident that the answer to her problems will just pop into her head at the very moment she needs it. And, oddly enough, she’s always right. While similar detectives like Poirot or Columbo make astounding leaps of logic, they always back up their claims with a barrage of minutely noticed facts that we, as an audience, could have seen too if only we were looking in the right places. It’s that moment of realisation that makes all the fumbling in the dark that mystery books offer all worthwhile, and Trine’s vague omniscience completely removes that satisfaction from this series, instead asking the audience to simply suspend their disbelief and leap on to the next set piece.

Tobin got his start in comics writing an all-ages book for Oni, and then moved onto similarly all-ages work over at Marvel, working on versions of ‘Spider-Man’, ‘Fantastic Four’, and even ‘The Avengers’. That pedigree is evident in the pages of ‘Mystery Girl’, which boasts a slightly wacky, cartoonish version of London that, at times, wouldn’t feel out of place in a Saturday morning cartoon. However, Tobin also pushes heavily for the adult market in this series by including gratuitous violence, nudity, and sexuality, in a way that, for me feels  hammy and overworked, especially when coupled with Alburquerque’s exaggerated art style. While there’s definitely a fairly engaging high concept sci-fi drama playing out with Trine and her mysterious power, Tobin spends half his final issue dragging the reader back to the supporting cast doing strange and far less interesting things in England. These include a naked, oddly homoerotic three-way brawl between Trine’s boyfriend and some of Linford’s henchmen, and a shootout between ageing copper (and sexual deviant) Alfie and a sniper, bizarrely peppered with a throwaway panel of two strangers having sex in a hallway.

It feels as though, right through to the last few pages, Tobin and Alburquerque weren’t sure what tone to strike for this book. There are some really dark moments of visceral violence, some light, almost slapstick elements, lots of bawdy, vaguely sexual humour, and some relatively dead-end narrative decisions (like the inclusion of modern-day mammoths) that feel almost absurdist. All of which is strung together in a way that left me unsure exactly from which angle I was supposed to be enjoying the story.

Alburquerque’s art has been relatively consistent throughout this series, but he’s at his most comfortable portraying angular, dynamic action. There’s a fun, cartoonish vibe to his faces and bodies that might be part of the reason some of Tobin’s more serious action pieces feel a little over the top, especially considering that this final issue is essentially on long scramble from one action set piece to the next. He manages to inject some weight and physicality into the fights, so that there seems like a sense of risk in most of the confrontations, but due to a lack of feeling out of many of the character’s fighting abilities we end up seeing match-ups without much context, including a tussle between Trine and Linford that asks us to assume Trine has the skillset required to take down a contract killer, using only a taser and some witty one-liners.

‘Mystery Girl’ was a book with a really perfect elevator pitch. ‘Girl with enigmatic mystery solving powers can crack any case except her own’ should be the start of something amazing, but this series found itself carried away with tangents instead of tackling the issue at hand, and only hints at a possible conclusion to the real mystery of Trine’s abilities in the closing pages of this issue. While it was a relatively fun surface-level romp, there feels like a lot more wasted opportunity here than real content.

Final Verdict: 4.5 – With so few issues, focus is key, but this series set up so much that it just couldn’t pull it all together into an engaging finale.