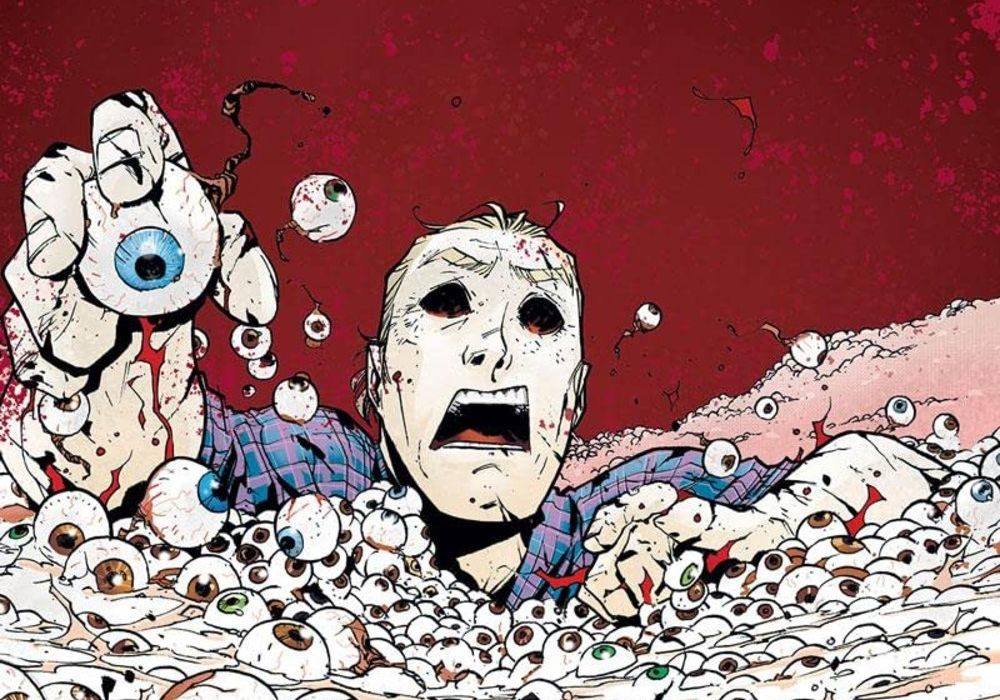 The scene: a gimmicky horror themed bar in the Pacific Northwest, filled with A24 kids waxing poetic about horror cinéma, their true crime podcast favorites, and local gossip of the creepy variety. And with that opening sequence, we’re in the dark, tumultuous, meta-loving slasher world of Nailbiter. Welcome back to Buckaroo, Oregon. It’s the town made infamous for its high output of serial killers, and for being Williamson and the rest of the creative team’s grisly playground. The first issue of “Nailbiter Returns” hits all the necessary story beats with verve, no question. 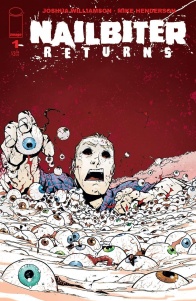 Sixteen of the world’s worst serial killers were all born in the same small town…but Agent Finch and Sheriff Crane solved and buried that mystery.

Violent copycat murders imitating the infamous Buckaroo Butchers have begun in Portland, Oregon, and if Finch wants the killings to stop, he’ll have to team up with the daughter of the Nailbiter himself.

A brand-new mystery begins in this EXTRA-LENGTH FIRST ISSUE!

Just what kind of follow-up story is “Nailbiter Returns” #1? This is important, because sequels can really be all over the place. Let’s take a look at how things stand at the start of this story. Alice, relocated to Portland, has snuck into the aforementioned gimmicky horror bar with her friends using a fake ID. Agent Nicholas Finch has settled into family life with a wife and young son, away from the action. In general, the Pacific Northwest looks relatively well rested. Judging by all this and a little Google-fu to remember when the original series began, “Nailbiter Returns” #1 takes place six years after the events of the first story started.

This is fun, and a great temporal space to play in. Six years feels like the perfect time jump for a sequel. Not long enough that our characters’ past wounds have fully healed, but not close enough to the days of destruction to warrant their need for fear and constant vigilance. So much of Nailbiter — and horror in general — is predicated on an uneasy peace, a mediation between giving in to paranoia and pushing back against it. It’s utterly delicious. The cherry on top is our opening flashback vignette, which takes us 30 years in the past. Given that gruesome flashback, it’s likely we’ll get some multiple timeline action in Nailbiter: Returns. We’re excited to see how Williamson and the rest of the team navigate the time jumps, and if their past work is any indication, they’ll do so masterfully.

For newcomer creators, first issues usually need to go all out and then back down a little bit in terms of pacing. They need to hit hard and fast to get an audience. However, Williamson, Henderson, and everyone else in the Nailbiter universe have the luxury of veteran status, meaning not only do we trust the team to make something pretty, but we revel in the opportunity to watch them put the pieces together. That’s a lot of what “Nailbiter Returns” #1 feels like. We have our setup: Alice’s mom, Sharon Crane, is missing. There was a lot of blood involved. Nicholas Finch gets called into the same city she disappeared from because local investigators stumbled upon a Buckaroo Butchers related murder on accident. Thirty years in the past, someone got their eyes liquefied by mystery acid, at the hands of an even more mysterious baddie. There are a lot of open ended questions here, and Williamson and Henderson do well to conceal each plot lever just enough so that nothing is too obvious. The rules of the new Nailbiter world have yet to be established, which is exactly where you want to be in a sequel: somewhere familiar, but fresh.

The villain, however, is one of our only minor hangups. It’s not that the visuals surrounding our shrouded foe are off — in fact it’s the contrary. Henderson, surprising no one, delivers. The pale fingers, the yellowed nails, the occult candles, the necklace made from gorgeously drawn human eyeballs; all of this fits together and looks stunning. The only issue is that nothing our villain says is that scary yet, or more importantly, despite all the ocular imagery, that visionary. Of course, it’s unwarranted to expect Williamson to distill the grand villain’s entire ideology through bread crumbs sprinkled across the first issue. Still, sometimes the preaching veers into triteness. This is less a critique and more a bookmark, and a reminder to check in on what our villain’s motivations are as the story progresses. The point is, remixing ideas of blindness, faith, and prophecy can only go so far. Maybe I’m just a grouch, but the cult fatigue is real. There, I said it!

We need to remember that this is Nailbiter though, so it’s highly unlikely the creative team will be caught sleeping at the wheel. To that end, Henderson has already updated the color palette for the “Nailbiter Returns” #1. Whereas the original series leaned into blood red everywhere, this story opens with a wider color scheme that ranges from orange to green to blue. The tones of Henderson’s Pacific Northwest skew a little autumnal here, which fits really well for the start of a story. There’s a reason autumn corresponds to the beginnings of horror stories so well. It’s not just Halloween, it’s that there’s something inherently unsettling about the transition from summer’s warmth to winter’s cold.

In summary, “Nailbiter Returns” #1 very much feels like a return. It’s not over the top with triumphant fanfare but still gets to the point quickly. This, to us, is the mark of confident storytelling. While it’s too early to tell the full scope of what’s in store for “Nailbiter Returns,” it’s clear that the things that matter most — blood, gore, and serial killer lore — are on the horizon.

Final Verdict: 8.7. Black humor and evisceration abound, what joy! It’s good to be back in Buckaroo.