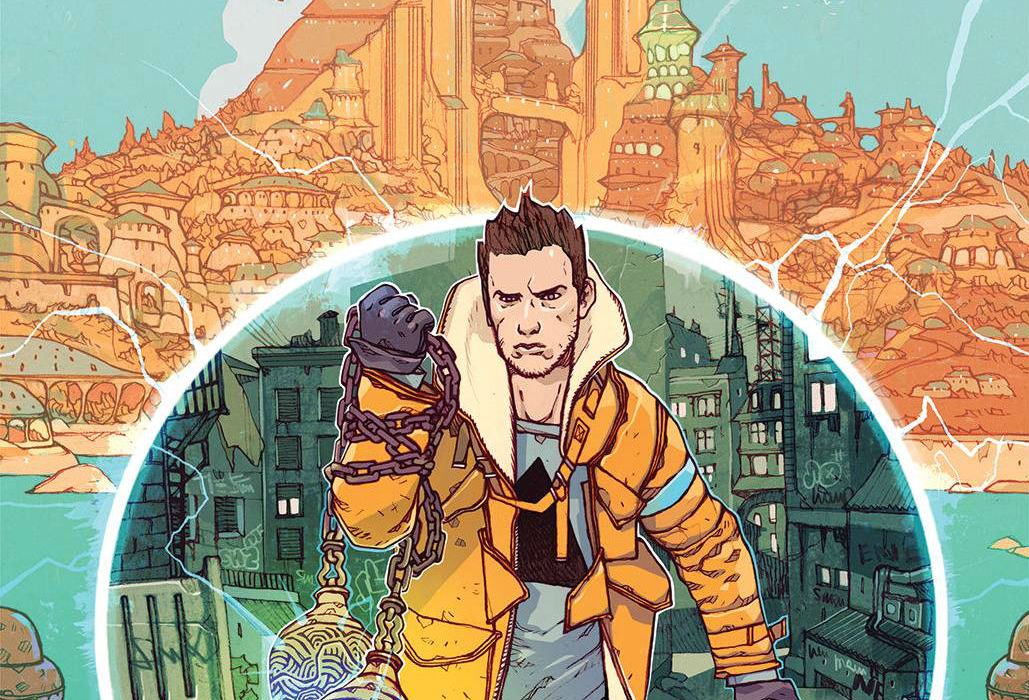 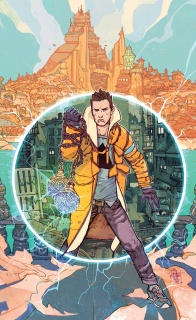 Once every seven years, Earth overlaps with Ektae, a world where alchemy is not pseudo-science but the driving force of industry. For seven days, Ektae breaches our world, bringing dirty magic and ideas. Jordan Molossus was born of Earth and Ektae and abandoned by both, but when he receives two cast iron urns containing his estranged fathers’ ashes, he’ll leave everything behind to put his parents to rest before Ektae disappears for another seven years.

Crafting a world within our own world takes a very specific skillset. Finding places to graft on fantastical elements while keeping the recognisably mundane still in view isn’t easy, but in ‘Namesake’ #1, Orlando and Rebelka manage to construct a version of Earth that is both relatable and all its own.

Launching us straight into the action, ‘Namesake’ opens one minute after ‘dimensional alignment’ has occured between Earth and the world of Ektae. Much like during NYE celebrations, the inhabitants of both worlds cross paths to drink, party, fight, and generally make mischief, and firefighter Jordan Molossus is one of the people trying to keep the two worlds in check. That is until a stark revelation about Jordan’s own past forces him to give up the life he thought he knew in search of answers on the other side of the portal.

This issue doesn’t give us too much in terms of narrative, focussing instead on building a general sense of the two worlds we find ourselves thrust into. As Jordan fights both real and metaphorical fires across the city we get an insight into the fragile balance between Earth and Ektae, as well as an understanding of what differentiates the two worlds. Orlando’s script is terse, and unforgivingly littered with slang and context-specific jargon that makes the world feel lived-in and believable, although you might find yourself having to re-read whole pages in an effort to decipher the meaning of certain phrases.

Orlando’s words are accompanied by Rebelka’s dizzying art, which perfectly captures the carnival of chaos that occurs as these two cultures merge. There’s a great sense of disconnect between the garish visuals and Orlando’s work-a-day scripting that further inforces our status as outsiders to a regular occurance. Rebelka distiguishes between the humans and Ektaens with understated design choices like skin tone variations and proportional inconsistences that gives them the look of modern day faery folk. This issue spends most of its time on Earth, with only the final couple of pages hinting at Ektae, but Rebelka clearly has a lot more in store for the more fantastical side of this world.

There’s a distinctly noirish vibe to the book, and that comes with quite a lot of lettering in the form of radio broadcasts, conversations, and multiple internal monologues. Thomas Mauer does a great job of placing these bubbles in a way that leads the eye through the panels, using the text to help direct the flow of the story instead of hinder it.

There are, as mentioned before, moments in the script that almost feel purposefully alienating, and I’m not sure whether or not Orlando pushes this too far at points. Early on in the book there’s a lot of un-explained information being slung around, and this imbalance is addressed quite heavily in the second half with a lot of exposition about Jordan’s past which, while it doesn’t feel forced, could maybe have been worked in more naturally.

Orlando’s wordy script hints at the tensions between the two worlds but only briefly, focussing more on Jordan’s personal tragedy and stoking the fires of his driving force. I hope as the book continues Orlando manages to find time to explore the politics and interactions between our two worlds as ‘tensions grow, judgement festers, and our fascination with a world of no responsibility and no rules’ continues to push negotiations between Earth and Ektae to breaking point.

‘Namesake’ immediately brought to my mind China Mieville’s ‘The City and The City’, a similar tale of two interconnected worlds with different political and social opinions, and I can’t imagine that’s a coincidence. This story may only be four issues long, but with Rebelka’s beautiful collage art style and Orlando’s confident scripting that seems like more than enough time to explore as they widen the myth and magic elements of their world. This first issue is ambitious, muscular, and electric, and I’ve no doubt that there’s a whole lot more to come through that portal.

Final Verdict: 8.2 – Alchemy may not be an exact science, but Orlando and Rebelka got the mix of magical and mundane just right this time around.