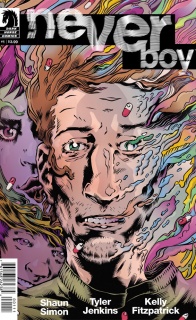 Most people take drugs to escape reality. Neverboy, a former imaginary friend, does the opposite. He’s found a loophole that allows him to stay in the real world. That is, as long as he stays medicated. But when the drugs wear off and reality fades, the forces that guard the borders between the real and the imaginary will be ready to drag him back to where he belongs.

Shaun Simon, keyboardist-turned-writer found modest comic-book fame collaborating with the equally multitalented Gerard Way on a post-apocalyptic follow-up to My Chemical Romance’s album “Danger Days”, but his latest venture is a little more contemplative. “Neverboy” follows it’s eponymous protagonist, a long forgotten imaginary friend, in his quest for survival. Ignored and maligned by society at large, he yearns for the halcyon days of relevance that saw him accompanying best friend (and reason for his existence) Sam, on innumerable, limitless adventures. But people grow up, move on, and forget, and Neverboy, like almost all imaginary friends, seemed destined for oblivion until he discovered that he could maintain a tenuous grip on reality through the help of heavy medication.

Now, hanging around hospital waiting rooms like a hypochondriacal heroin addict, Neverboy splits his time pretty evenly between contemplating the point of his existence and doing everything he can to prolong it. On the surface of things, then, he doesn’t seem too different to anyone else in the world.

Simon’s narrative style leans more towards the introverted sprawl usually associated with more indie graphic novels than the bombastic melodrama of big budget comic books. His focus is definitely on creation of a multifaceted, believable character rather than speeding through set-up to get to action sequences. It’s great to see Dark Horse supporting this kind of storytelling and Simon executes it with incredible confidence. From Neverboy’s opening monologue – a metaphysical medical exam that sees him listing all his perceived ailments in the hopes of painkillers – it’s clear that Simon can balance humour and drama well. He quickly sets up a relatable and sympathetic protagonist who feels more real than many of the other offerings you’ll find on sale this week, even as he fades into insubstantial transparency.

And this character-driven first issue gets even more enjoyable once Neverboy starts interacting with people. This first issue fills its audience in on backstory through a series of exchanges between Neverboy and his wife and son – yup, our hero may be imaginary, but his game definitely isn’t.

Neverboy’s voice is as confident as an adult, but as hopeful and naive as a child’s, the perfect representation of what kids think grown ups sound like. Through the earlier pages Simon convinces us, through complex, introspective outpourings, that Neverboy has a handle on his life. But, as things start to fall apart, his language deteriorates accordingly, until he’s barely stringing sentences together anymore.

But, for all its nuanced writing, “Neverboy” owes its success in no small measure to Tyler Jenkins and Kelly Fitzpatrick’s pitch perfect artwork. Jenkins proves, from the very first page, that he can make even boredom seem interesting. Capturing the sepia-toned dullness of a hospital waiting room, his angular, crescent-moon-faced protagonist seems slightly at odds with the real world in an almost unidentifiable way that jars with the reader and reminds you of the underlying unreality of the situation. Given the dialogue-heavy structure of the first half of the comic, Jenkins does a great job to keep every page feeling fluid and focused. The generously sized panels keep the action flowing without getting tripped up, while Neverboy’s dynamic, long-limbed execution flexes over the panel boundaries on numerous occasions, giving the character a decidedly liminal, multidimensional feeling.

But what’s great about this comic’s artwork is that, as the narrative progresses and the world of the increasingly sober Neverboy starts crumbling, Jenkins’ art and Fitzpatrick’s colours become increasingly bizarre. During the second half of the issue, as the story starts to pick up the pace, Fitzpatrick turns up the contrast on the world, with an ominous multicoloured shower of rain that culminates in a rainbow-hued flood that washes through the latter half of the comic and ends up discolouring the background of almost every panel with an unreal colourscheme. This influx of colour seems to drain the energy and life from Neverboy himself who, in an inspired colouring choice, loses the pigment from his hair as he loses his grip on reality, so that he feels in danger of fading away completely by the end.

This entire first issue feels as though it’s split in two halves. The first section is closely anchored in reality and focuses more on exploring the characters, while the section section speeds up, kicking the story at large into gear. Without giving away too much on the plot, because mystery and uncertainty play a big role in making this comic book the romp that it is, the final pages of the first issue see Neverboy on the run from some shadowy cabal of imaginary policemen, who interrupt his familial bliss and turn his world on its head.

While it’s a little slow to start, this totally bonkers comic book is definitely one of the best new properties I’ve picked up in a while, and I’m definitely adding it to my pull list as a welcome diversion from more traditional comic-book fare. It’s smart, full of heart, and beautifully rendered, a great addition to any comic-book fan’s library.

Final Verdict: 9.0 – Fresh, fun, and totally off the wall. You should be reading this!