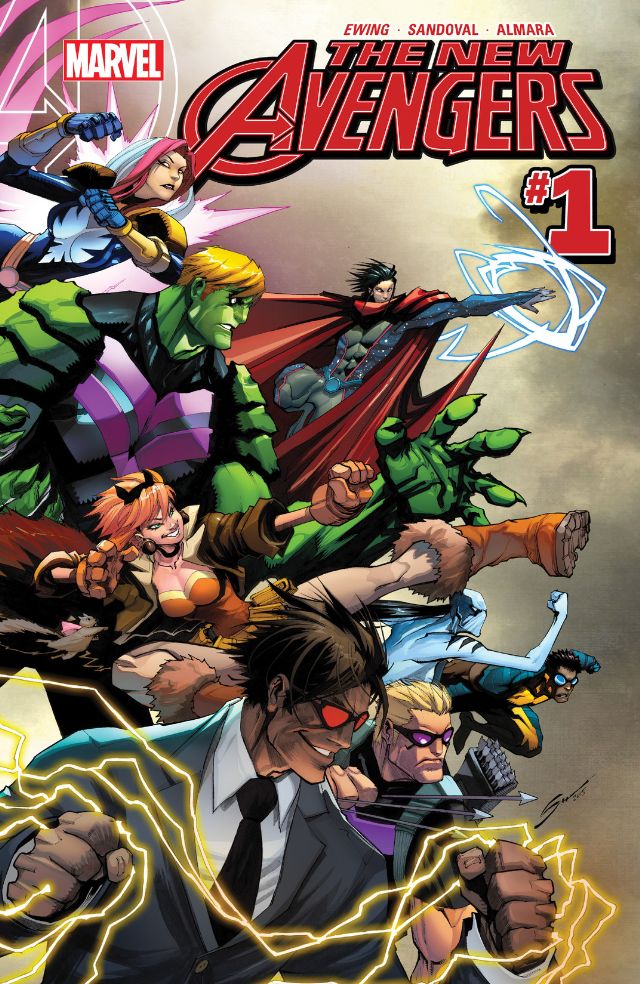 The lead up to “Secret Wars” saw many changes, one of the major ones being Roberto da Costa purchasing A.I.M. and turning it into a force for good. Does Al Ewing and Gerardo Sandoval’s continuation hit the mark? 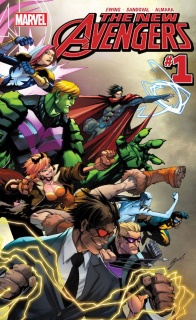 EVERYTHING IS NEW. In the wake of SECRET WARS, the old order changeth – and Bobby DaCosta, Sunspot, is just the man to changeth it. Welcome to AVENGERS IDEA MECHANICS – a super-scientific global rescue squad of tomorrow’s heroes… today! America doesn’t want them! S.H.I.E.L.D. doesn’t know what to do with them! But Earth might not survive without… the NEW AVENGERS!

For those of you who read my review of “Avengers #0”, you know that “New Avengers” was my most anticipated book in Marvel’s relaunch. It had nearly everything that attracted me: a writer I liked, a team that I (mostly) loved, it doesn’t automatically throw away everything from the previous volume of Avengers but uses some of it to build something else, and it has one of the most interesting villains Marvel has made in the last decade.

Let’s get the good things out of the way first: Al Ewing does really well with some of the character dynamics. What I feared after “Secret Wars” was that Bobby Da Costa was going to lose all his character development and regress back to New Mutant wallpaper. Thankfully that does not happen and he comes off as the most interesting character in this book. Suave and confident, but smart enough to work angles and is a leader that actually delegates! The other character that Ewing’s got the best hold on is the much anticipated Songbird. As the field leader, she’s quick to adapt and knows her team well and isn’t afraid to be a bit snarky to her boss.

The going ons at the team’s base on Avengers Island were enjoyable as well. There is a double page overlay of the Island and showing a variety of the facilities. It’s wasn’t necessary, but I really do appreciate the commitment to world building. Getting the fact that Hawkeye is going to be S.H.I.E.L.D.’s spy in the Avengers Ideas Mechanics was a smart (and humorous) move since most would have been able to catch that immediately from the promos for the book.

So, what were the not so great parts? Well…

I guess the first thing I should mention comes off from the previous: I have to once again invoke a blood curse upon comics journalism and the three-month-prior bastardom that are solicitations because if you followed any of the press surrounding the book, then literally every single bit about this issue is spoiled for you. For the layman, that doesn’t mean much, but for people like me and my colleagues that do have to follow this stuff, it does paint the opinion a bit.

Now with that out of the way, let’s talk about the thing that every single person has talked about ever since we got the first promo for the book: Gerardo Sandoval and colorist Dono Sanchez Almara’s artwork. And like I said about “Avengers #0”, their art really, really, really, really doesn’t work for this book. I get exaggeration. I get the manga influences. I don’t even think the artwork is “bad”, per se. But there’s a difference between exaggeration and just outright noodle people. Yeah, it seems like A.I.M.’s technology is truly wondrous, because they managed to take a bunch of Songbird’s body weight and put it into Wiccan. I joked on twitter that Billy Kaplan must have done nothing but deadlifting during the eight month time skip, but it was meant to be a joke. And if you think I’m just being picky, the Maker has the same problem. And the Maker is a petty bastard, but he’s not that kind of petty. Furthermore, as was pointed out to me by a friend, Sandoval is really arbitrary when it comes to such things as pupils. Like, we see nothing but the whites of people’s eyes. During action scenes, it can work, but during rest scenes, they come off as unintentionally creepy.

But it isn’t just the art. Let me be honest: I don’t like Squirrel Girl. Okay, let me clarify: I don’t like when creators try to put Squirrel Girl in a book that is trying to take itself somewhat seriously. And, for all the quips and stuff in this book, it still is also about some really grim superscience stuff. And her dialogue and actions just really put a fracture in the tone that is trying to be set here. I don’t want to say it’s to “Scrappy Doo” levels, but it really does come off as that vein of obnoxious. What kinda didn’t help was Sandoval’s exaggeration of her buckteeth to the point that I was thinking: “Man, if she was Chinese, this would come off as incredibly racist”.

And yes, while I did say Ewing has a good handle on some of the characters, some of them feel like we need more time to see the characterization ironed out. I admit to being picky as hell when it comes to Billy Kaplan a.k.a. Wiccan, because he’s my favorite gay character in…well anything because he was such a personal identifier for me. It does seem like Ewing is taking cues from the Gillen/McKelvie “Young Avengers” run and, one day I will go into longform the backlash I’ve had with that series, but suffice to say, didn’t think that was Billy’s greatest moments. This one is too soon to tell, but something I’m watching.

A character that does concern me more is the Maker. Part of it may come from the fact that Ultimate Reed Richards has become so synonymous with one writer over the last five years, so when a new one takes up the torch there is dissonance, but this operation seems soooo below the Maker. Unless of course there’s a bigger objective within, this comes off as kinda stock mad scientist. This also brings up something else, another fear of mine: Because “Secret Wars” is going to see the Ultimate Universe brought into the Main Universe, my fear is that they are going to, in video game terms, “nerf” the Maker, as in make him less of a menace or threat. The main Marvel universe still tries to be the “world outside your window” and Ultimate Reed Richards has done some massive things in the Ultimate Universe that had severe consequences. I just don’t see that level of damage being done here.

Final Verdict: 6.0- “New Avengers #1” was fine, but it wasn’t the grand slam I was hoping it would be. It does enough to make me want to continue and Al Ewing is a creator that has more than earned the benefit of the doubt.