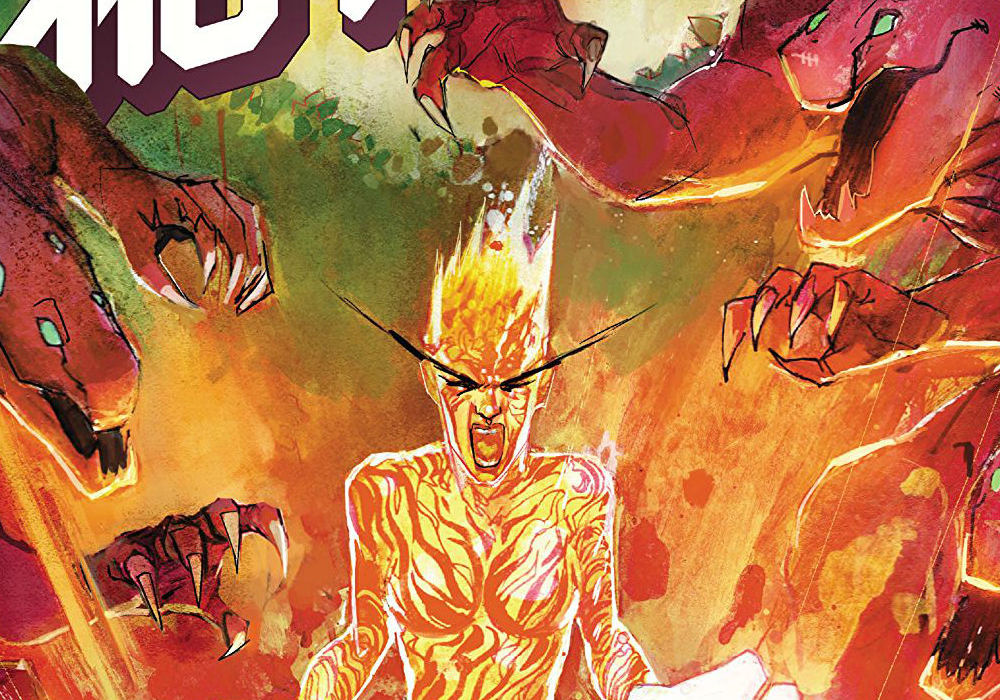 In the Marvel Universe, it’s a bright new dawn for the mutants of the world. Out in the real world, it’s a bright new dawn for all of us who are fans of those mutants. I can’t speak for anyone but myself, but being an X-fan was a struggle for the longest time. To be fair, there were some bright spots but a lot was ‘so-so’ and some was outright bad. Remember when all the mutants had to deal with M-Pox? Then there was the whole RessurXion initiative that did nothing for me. The X-Men moved to Limbo and Central Park for reasons that I’m sure made sense at the time. “Inhumans VS. X-Men” and “Death of X” were certainly…things that happened. Definitely a struggle…but it was worth it because now we have Krakoa, and Krakoa is all we will ever need. 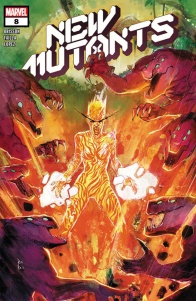 Written by Ed Brisson
Illustrated by Marco Failla
Lettered by VC’s Travis Lanham
Colored by Carlos Lopez
Back on Earth, the young mutants of Krakoa look forward to the future…whatever it may hold.

It’s probably important to note that over the course of the last seven issues, “New Mutants” has essentially been two separate and unrelated books with the same title. One book featured John Hickman’s cosmic hijinks and the other revolved around Ed Brisson’s earthbound shenanigans. So for everyone who picked up or planned to pick up this issue hoping to get the former, this isn’t for you. This issue continues where Brisson left off in issue six. Armor and Boom-Boom (still one of the best mutant names ever) are in a bad mental place after the fiasco in Nebraska as they assist Magma on a rescue mission in the Amazon.

The artwork was solid throughout this issue. Marco Failla’s art style isn’t really going for hyper-realistic. Some of the characters features are exaggerated but that just makes them more expressive and stylized. The fight scenes are also good and full of energy as Armor rips a monster completely in half and Tabitha lights one up from the inside. “New Mutants” is about the younger mutants of Krakoa and the artwork matches their tone. Not just Failla’s pencils but Lopez’s bright colors too. All the visuals are fun to look at, that’s for sure.

One thing that I realized right away was that I, personally, would have enjoyed a shift in character focus. In this issue, Magma is the take-charge leader while Boom-Boom and Armor are effectively her sidekicks on this mission. Nothing against Magma but…I don’t really know her. I’m not well-versed in her lore at all. Apparently her father leads some sort of top-secret ancient Roman city? That seems like the sort of thing fans of Magma might like but it just felt weird and out of left field to me.

While it was very thoughtful of Magma to bring Armor and Boom-Boom along to remind them of their role as X-people, it would have been nice to see Armor as more of an equal. Hisako Ichiki’s a full-fledged X-Man but every time I see her, she’s treated like a rookie. Tabitha remains a hot mess of a mutant though Magma’s plan worked in the end and Boom-Boom feels better now. Still, I would have liked to see that expanded upon. Tabitha beat some monsters, loaded up some mutants on the jet and then said she was all good. It might have been better to show instead of tell the audience…if that makes any sense.

Speaking of parts and roles that should have been expanded, this issue could have used more Sebastian Shaw, oddly enough. Sebastian doing dirty deals with and outmaneuvering drug cartels is actually a fascinating concept. Overall in Dawn of X, it’s been cool to see how helpful the ‘evil’ mutants like Shaw, Gorgon and Apocalypse can be when their skills and scheming are used to benefit mutantkind. It would be great to see more of Shaw being productive like this over in “Marauders” instead of trying to go toe to toe with the White and Red Queens. Again though, his pages in this issue were far from the focus.

The central plot of “New Mutants” #8 feels like standard superhero fare. They fight big monsters and the next level boss revealed on the last page is probably just going to throw bigger monsters at them. While there’s nothing wrong with standard superhero fare necessarily (these are superhero comics after all), how does that connect to the rest of the Dawn of X line?

Obviously “New Mutants” is connected to the other books. It borrows both Shaw and the monsters from its sister title “Marauders”. However, this new era for mutants has been so astronomically far from ‘standard’ that this feels like a bit of a step backwards. There’s not even a data page, which I’m fully aware is a weird thing to complain about. I just wonder…now that Hickman’s seemingly done on the title is this supposed to be the designated ‘superhero fare’ book for Dawn of X? Or is it supposed to be the showcase for the younger mutants like the original New Mutants and all the once-new mutants from Generation X, Academy X, etc.? Or maybe it’s supposed to be both? In any case…it’s good but there’s definitely room for improvement.

Final Verdict: 6.5 – We had an alright time but we sure could use something ‘new’ in “New Mutants”.