After a brief window with only a few X-Men series, we’re back to the good old days of a dozen plus titles. This latest series distinguishes itself with a subtitle, and thus a promise to be self-contained. As it happens, that’s a really good thing. “New Mutants: Dead Souls” doesn’t establish itself as the thrilling start of a new saga but instead the amusing beginning to a tale featuring a few fan-favorite mutants. 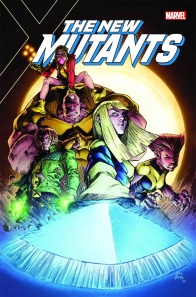 THEY AREN’T JUST THE X-MEN IN TRAINING ANYMORE! The New Mutants are launching themselves headfirst into some of the creepiest corners of the Marvel Universe, going on the missions no one else will. But does the team know what they are really hunting for? And what are they willing to do to get it? The enigmatic MAGIK will lead her team of WOLFSBANE, RICTOR, BOOM-BOOM and STRONG GUY and bring them face-to-face with paranormal threats that they may not be prepared for, and that might just tear them apart! Rising-star writer Matthew Rosenberg (PHOENIX RESURRECTION) teams up with future superstars Adam Gorham and Michael Garland (ROCKET) to bring you the next chapter in the lives of Marvel’s underdog team. Welcome to the new class of New Mutants — hope you make it out alive.

Though it is called “New Mutants,” the team only draws about half its roster from the classic 80s series. The other half is taken mostly from different iterations of “X-Factor.” Lately, Marvel teams have felt thrown together randomly, but all of these characters make sense. They are similar ages, and it is revealed working for a private and professional super heroing company. Assembling this cast makes a lot more sense than the umpeenth team of alleged Avengers.

This group consists primarily of Rictor, Strong Guy, Magik, Wolfsbane, and Boom Boom, with appearances by Karma and Prodigy. Snark is the name of the game here, and everyone plays off each other like Peter David’s “X-Factor.” The jokes come fast and heavy. Some land. Others don’t.

You can tell writer Matthew Rosenberg is going hard for the comedy. Its not just limited to team banter, it also gets mixed into the introductory captions. Magik is described as “Ilyana Rasputin. Team leader/Goth mutant teleporter. Witch. Sometimes demon queen of Limbo.” Strong Guy is introduced as “Guido Carosella. Team strong guy. He’s strong. Lost his soul. Got it back.” Later, a caption box amends that “Magik also has a magical sword” and that “she’s kind of hard to explain.” I get that Marvel’s mutants are notoriously complicated, but that really does the trick. Strong Guy’s recent issues with his soul don’t really come up in this issue. Magik’s soul sword is only important in that she has it. Invoking the complexity is a little off-putting, and totally forced.

Fortunately, the dialogue fares a lot better. Rosenberg is clearly going to be a big deal in the years to come at Marvel. Inevitably, he’ll find a niche, be forced to write an event, burn out, and leave to do creator owned work. In the meanwhile, he’s a really enjoyable superhero scribe with a great take on characterization. He’s also the kind of writer who can be copacetic with his artist, stretching that characterization into more than just words on the page.

That’s where artist Adam Gorham comes in. Most of this issue has our mutant superheroes in street clothes, but that doesn’t mean Gorham has everyone in t-shirts and jeans. Rictor looks fashionable, but like he’s shopping on a budget. Boom Boom is dressed to provoke. Magik is taking her goth thing to the next level with an ugly band shirt and cheap Hot Topic necklace. The looks themselves are sort of hit or miss. It doesn’t look like Gorham is as fashion conscious as some other artists working today. But he gets a lot across about each and every character with a few sartorial choices, coupled with bad posture.

Supernatural elements become more prominent in the story, but the escalation is well paced. At first, Guido is the only strange looking element, with his freakishly hulking muscles. Then it’s Magik who does some, well, magic. By the time Wolfsbane has gone full werewolf and zombies are rising up from the Earth, the reader has had time to settle into this team and their dynamic. It’s actually pretty refreshing for a superhero adventure to be so one and done. It feels practically retro. The next issue is set up in an epilogue, and we’re off to the further adventures of this team.

So on the one hand “New Mutants: Dead Souls” is not essential reading. It doesn’t shake the X-line to its core. But on the other and much more important hand, it’s a pretty fun adventure featuring some worthwhile characters. I would say this is a book that deserves your attention much more than another generic crossover. It has a tone, a team, and a direction. By the end of the adventure, you’ll be glad you spent some time with these whackadoos.

Final Verdict: 7.5 – A fun mutant diversion that comes with no strings attached.