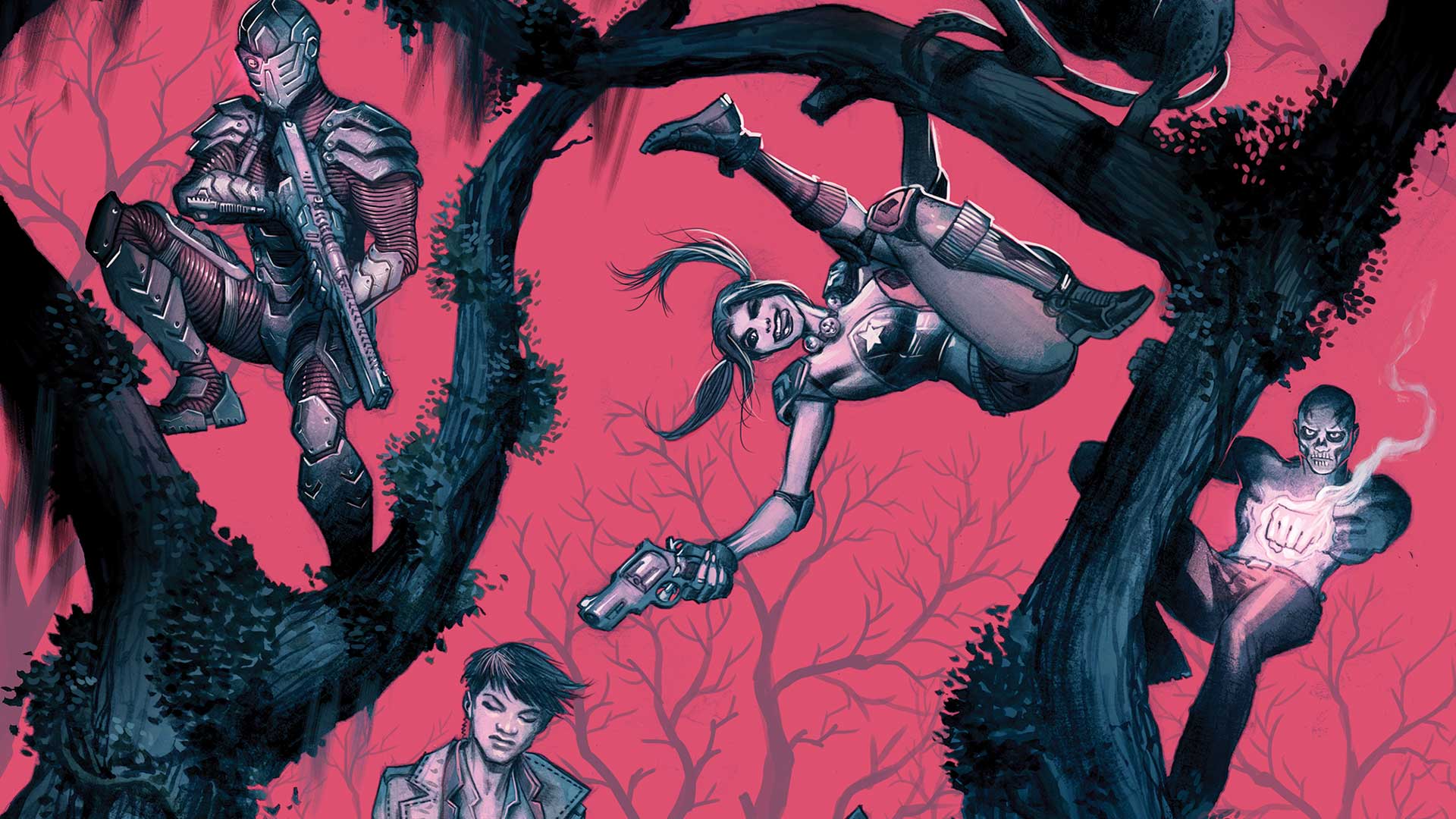 “New Suicide Squad” shifted gears last month when Tim Seeley and Juan Ferreyra took over the book. Both men had been doing solid work in the Bat-family, and DC seemed to acknowledge that a book that is spawning a film franchise needed to be in steadier hands. This issue marks the second installment from Seeley/Ferreyra, and the book is beginning to mold into something that is both something new, and looking toward the upcoming film as inspiration. 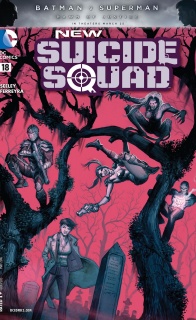 Officially “killed in action,” the Suicide Squad considers what to do with their newfound freedom—but not for long, as their mysterious liberator reveals his own dark reasons for aiding them in their escape—reasons that drag the members of Task Force X deep into the heart of evil in the DC Universe.

Much to my chagrin, the ‘classic’ Suicide Squad is probably never coming back. Adding Harley Quinn, one of DC’s most popular characters, is more or less a permanent decision, at least for the foreseeable future. And so, part of the challenge of the series is finding a way to keep Harley on the team, and in the forefront, without making the book just a (third) monthly Harley title.

Seeley gets that, and uses Harley in a way that feels both inspired by the Conner/Palmiotti run and somewhat fearful of it. Sure, she’s the playful and insane character she is in her monthly book, but she’s used as the unreliable narrator at points here, which allows her character to be as zany as possible, but without having to drag the others down to her level. It is a deft move, and one that works wonders.

This issue picks up after the ‘death’ of the team last month and, as expected, they are far from dead. The issue takes its time to shed the full light on what exactly is happening, but the plan, when revealed, is far less convoluted than you might think, and sets up a nice, short arc to wrap up the series, pre-Rebirth (when artist Jim Lee and writer Rob Williams re-launch the book).

One thing that Seeley does, which I greatly appreciate, is that he gives the book a little history gleaned from his time writing for DC. The issue re-introduces the ‘Fist of Cain,’ a group that he used in his “Grayson” run, which utilizes a point system for kills, and is in competition with one another to collect more points. It is almost like a country club, where the game is murder instead of golf.

Now, is this the greatest group in DC history? No, but by Seeley introducing them, it gives both the Suicide Squad and the Fist of Cain some connection to the greater DCU, and energizes both groups. The Suicide Squad, when used to its full potential, is the underbelly of the DCU; by pitting them against the Fist of Cain, a similar group, it utilizes them in the best possible way.

Of course, all of that would be moot without Ferreyra’s incredible artwork. Fans of “Gotham by Midnight” (or Dark Horse’s “Colder” series) will recognize his work, and he’s a one-man factory, pencilling, inking, and coloring the pages here. His work is perfectly suited for this dark corner of DC, allowing people like El Diablo to truly look menacing. His work in the horror genre shows that he’s very comfortable with the darkness that permeates this book, and when he draws something like Captain Boomerang getting a shard of glass lodged between his teeth, it works like a charm.

What is surprising and enjoyable, however, is how he also takes to characters like Harley, and brings both her menace and her playfulness to the surface with the way he illustrates her. His Harley is impish and cute, while also being evil and oversexed. It is, visually, one of the more complete Harley’s that we’ve seen in years, and helps make her palatable for this issue.

Ferreyra also does a nice job with the character design of the ‘other’ Suicide Squad in this issue, the ones who supposedly took out Harley, Deadshot and co. last month. The character designs are part Squad homages and part, oddly enough, X-Men/X-Factor-ish. Deathtrap is a Deadpool/Deadshot/Deathstroke clone, Kilgore is half Nightcrawler half Mignola creation, and Hellslayer is Domino-esque. These look like what they’re supposed to be – knock off heroes. Ferreyra’s designs are pitch perfect, and really elevate those characters from background nobodies to fully formed nobodies.

You get the sense that Seeley was told that he had a limited cast to work with, many of whom are, probably not coincidentally, also starring in Suicide Squad, due in August. El Diablo, in particular, has been an afterthought for years at DC, so it makes sense for Seeley to work some magic on him. Deadshot and Harley are the stars of both the book and the film, and Seeley does what he can to make the appearance of Will Smith not all that shocking, even if he doesn’t resemble anything close to what Floyd Lawton looks like here. Hell, just taking his mask off for much of the issue helps that.

But overall, this is a really nice example of editorial requirements being met with creative work. Ferreyra and Seeley are giving their all on this book and, even if it still isn’t quite my “Suicide Squad,” it is far better than what we’ve gotten for most of the New 52.

Final Verdict: 7.6 – The mid-point of a nice final arc to put the series to bed