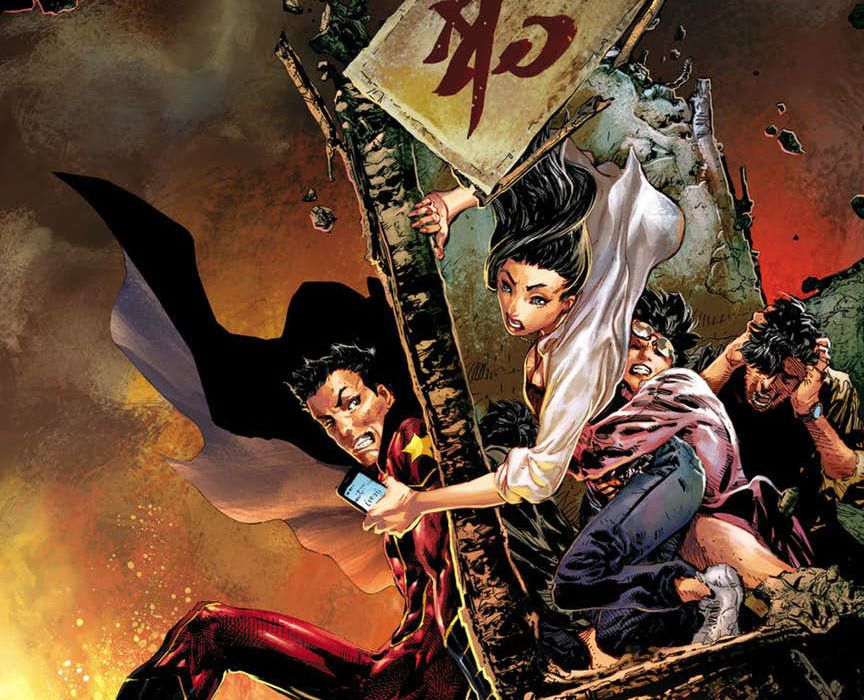 With Gene Luen Yang’s fantastic run on “New Super-Man” taking a break before rebranding next month, it’s time for a new writer to take the reins for this issue. Mariko Tamaki accepts the challenge, and gives us a Laney Lan-centric issue! 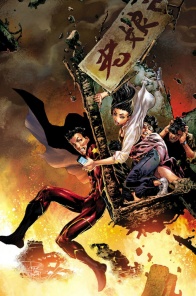 “A Day in the Life”! The New Super-Man and Justice League of China changed the metahuman landscape of China forever, and Laney Lan has reported on their heroics since day one. But there’s more to Shanghai’s ace reporter than meets the eye, and when faced with turmoil in her own family, Laney’s commitment to reporting the truth will be tested like never before.

After a big arc, it’s nice to have a breather issue and it’s always good to look at characters who needed more focus. This issue of “New Super-Man” gives us both that, as we take a step away from the action and the growing Justice League of China to follow Laney Lan, and see how much of an intrepid reporter she is.

The issue’s focus on Laney provides a nice amount of character insights and development as we see her at work. We get to learn more about her as an individual, her ambitions, methods, obstacles, and personal problems. I love Gene Luen Yang’s run, but I will admit that Laney didn’t get much time or focus, so getting to know more about the character is nice. In fact, after reading this issue, I have a good deal more respect for Laney.

Story-wise, it doesn’t exactly advance the plot; after all, the entire chapter takes place earlier chronologically, as Laney uncovers a plot twist we got to see play out a few chapters back. Even the villain we see Super-Man and Bat-Man fight is of very little significance but it still leads into a nice scene with Laney interviewing them at a ramen restaurant.

Perhaps the most powerful character moments in “New Super-Man” #19 comes from Laney’s own personal life and problems, as her mother constantly hounds her to call her father. At first it just seems like background noise, adding to the hustle and bustle of her life, but the more it comes up, the more evident it becomes that she’s avoiding it for a reason.

While the reason itself would be a big spoiler for the issue, I will say that it’s impactful in regards to the character of Laney Lan. It also creates a nice parallel to Kenan, as she spent most of the issue contemplating and investigating the secrets about his family that she uncovered, while sitting on family secrets of her own.

If you keep an eye out, you might catch a little world-building as well. Through Laney’s conversations and narration, we learn about how the Justice League of China is viewed by the general public, and how the primetime news is focused on entertainment and fluff issues like popular phone apps, rather than the truths that Laney is seeking.

Oh, and we also learn of a mysterious leaker, who sent an anonymous tip about Doctor Omen, the Justice League of China, and her true relation to Kenan. So that, in all likeliness, is a bit of foreshadowing for important plot details to come.

While it has a guest writer, this issue of “New Super-Man” continues with Brent Peeples as the illustrator, while Richard Friend continues his ink duties. Recent issues have alternated artists, and while Brent may not be a personal favorite, he still does a fine job. The character designs are a little angular at times, but they remain consistent and distinct, and everything is paced and sized properly to the enormity of the situaion.

Peeples’s strongest work comes from the larger scenes, whether they’re crowd shots or giant robots. Yes, there is a giant robot, and the shots of it looming over Laney (and us, by virtue of her being the focal character) look great. The way it partially blocks out the sun, leaving it cast in darkness while its panels and eyes glow dangerously, looks fantastic. By following it up with that same image as a photo on Laney’s phone, with a text from her mother superimposed over it, we’re taken back to her life and her narration without directly cutting away from the action; overall, it’s a very well-executed scene.

It’s followed up with a shot of Kenan pulling off the robot’s head, and while the page is very nicely framed, and the action is solid, the way his face is drawn does slightly fall apart. It makes him look more scrunched and rugged, in a rather unrecognizable way, and considering he is the titular “New Super-Man,” being able to get him right is important. However, later pages, such as him talking with a mouth full of ramen, have much more personality and look more like the Kenan Kong we’ve come to know and begrudgingly love, so while it’s not always consistent, it’s not that bad either.

Those are just minor bumps in the road here and there; overall, the artwork is fine, and matches the style of the other artists well enough, so it’s never a jarring change.

Of course, it helps that Hi-Fi continues to provide the color work for each issue. The colors are bright but not jarring, making good use of reds, blues, and yellows to really stand out from the page. Laney adds a fair amount of pink to the issue, but it blends well, and overall the color work makes the issue a treat for the eyes.