“Nightlights,” Lorena Alvarez’s debut title from Nobrow initially slipped under my radar. It’s not from the usual comics publishers I follow, and it’s a children’s book. I’m glad I caught it though, because it truly is enchanting. 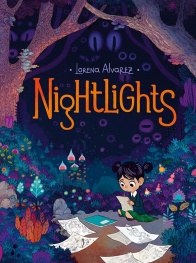 Written and Illustrated by Lorena Alvarez

Every night, tiny lights appear out of the darkness in Sandy’s bedroom. She catches them and creates wonderful creatures to play with until she falls asleep, and in the morning she brings them back to life in her whimsical drawings. When a mysterious new girl appears at school, Sandy’s drawings are noticed for the first time… but Morfie’s fascination with Sandy’s talent soon turns into something far more sinister.

Blending the reality of a strict Catholic school with a young girl’s boundless imagination, Nightlights is a beautiful story about fear, insecurity, and creativity, from the enchanting mind of Lorena Alvarez.

“Nightlights” first came to my attention when a ’children’s comics for all ages’ link appeared on my Twitter feed. The art immediately piqued my curiosity; this truly is a gorgeous book to behold. By the time I’d read a few pages on Amazon, I knew it was a book I had to buy.

Perhaps I’ve been reading too many monthly comics lately, but this was truly a welcome change of pace. “Nightlights” is a comic that uses space to express time and isn’t afraid to settle into a scene instead of jumping to the next pertinent plot point. It’s important to Alvarez that the reader really feel this world, because half the time the world is entirely in her main character’s head.

When “Nightlights” begins, Sandy is lying on the floor, drawing on pieces of paper. This is expressed simply and elegantly as a double page spread, mostly white on the left-hand side, gradually populated with drawings and finally Sandy herself as the reader’s eyes travel right—blank pages filled with pictures both in story and execution. 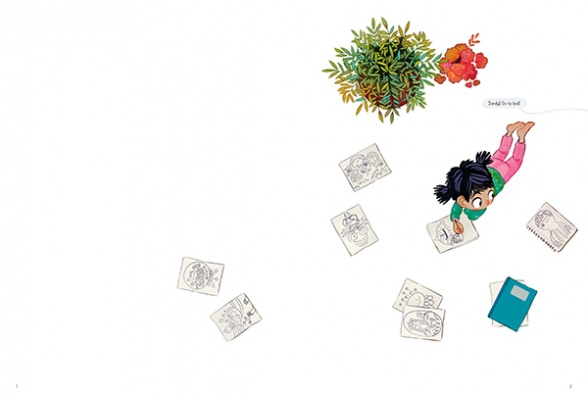 By the next page, Alvarez is already playing with her reader’s comics literacy. When Sandy’s mother asks if Sandy has done her homework and Sandy replies in the affirmative, we’re shown a panel full of Sandy’s drawings, no homework in sight. When Sandy’s mother asks if Sandy has polished her shoes and Sandy says yes, we’re shown a pair of shoes that look as if they’ve in exactly the same state they were when Sandy took them off earlier in the day. Alvarez doesn’t explicitly say neither task has been done, but rather invites the reader to contrast the text with the image and come to their own conclusion.

I think those of us that grew up with comics often take comics literacy for granted, as though it’s something that anyone can do, but it’s something we’ve learned. I’ve spoken to adults that haven’t read comics growing up, so their exposure is limited and the foundation of their comics literacy comes from warning diagrams like the emergency procedure cards on airplanes. When I’ve shown them comics, I’m often surprised by how much of the story goes right over their head.

So when I read a book for younger readers like “Nightlights,” I can’t help but be aware of the techniques it uses to tell its story, since it is a book designed for shaping comics literacy. Alvarez challenges her young readers by introducing techniques early in the book, then using them in more advanced ways as the story progresses, especially as she gets into non-literal and ambiguous imagery.

I particularly enjoyed the way she used montage splash pages to express both time and the mental space of Sandy at the same time. It’s used in a simple enough way at first, with Sandy going to sleep, floating through a dreamscape and then waking up, but later Alvarez takes it further. In one particular sequence she shows how Sandy passes an afternoon in a supply room while writing lines. In a single illustration, confined to a single, small environment, Sandy goes on grand adventures in a series of character-revealing vignettes. There’s even a nice bit of visual foreshadowing in the scene with Sandy’s friend Morfie as she examines some jars.

There is a lot of non-verbal character building in “Nightlights” too. If you want to know who a character is, look at their body language, look at what they’re doing and where they’re doing it, and look at their hands, because Alvarez knows how to find that extra bit of emotion in hands. Just look at how Sandy holds her pencil when she’s happy compared to how she holds it when she’s stressed.

The character work is especially important in the school scenes. All the girls wear the same uniform and all the teachers are nuns. It would have been very easy to populate the school with clones, and yet each character—no matter how small their role—is distinct.

In terms of design, I love how unified “Nightlights” is. One thing that bothers me about many comics is they way we’ve developed a kind of generic approach to speech balloons. This is not necessarily a bad thing, and it works for many projects, but every now and then one comes along where the speech balloons seem to come from a different world than the art or the subject matter. (Anyone that has ever read a comic book that uses Comic Sans unironically knows what I’m talking about.) Sometimes it can be really jarring to the point that it pulls me out of the book.

Then you get a book like “Nightlights,” where the speech balloon style has been tailored specifically for the book. It fits so well, you don’t even think of it as being separate from the art. For example, look at the way Alvarez draws tree branches, then look at how she draws the tails on speech balloons. There’s a unity to the design. 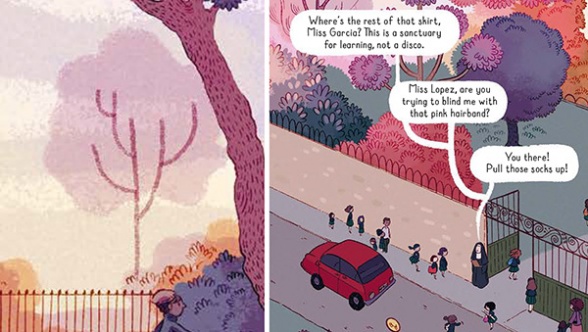 Finally, I like that this book is a bit creepy. As a child, I remember being frequently annoyed by the way adults portrayed children’s imaginations: they were silly, they were irrational, they were saccharine, and, worst of all, they were inconsequential. They were seen through the lens of an adult going, ‘Shucks, kids say the darnedest things, don’t they?’ They were written by adults that had forgotten what it feels like to be a kid. A kid when caught up in their fantasies doesn’t have a part of their brain that looks around and says, ’Hmm, this is a bit silly,’ or goes, ‘Oh, don’t worry. This doesn’t matter.’ On the contrary, it matters a great deal.

I enjoyed Alvarez’s depiction of Sandy’s fantasy life because it was more honest. Yeah, it can be an escape, but it can also be a nightmare or a manifestation of outward pressures. It is anything but inconsequential. To ignore Sandy’s fantasies is to only see half a person.

“Nightlights” is written and drawn beautifully, with fully realized characters and environments, and an expert control of time and space. For young readers, it is an excellent book to teach comics literacy, and approach some slightly ambiguous subject matter, as long as they don’t mind a little bit of creepiness. (But, c’mon, we all know all the best kids’ stories are a least a little bit creepy.)