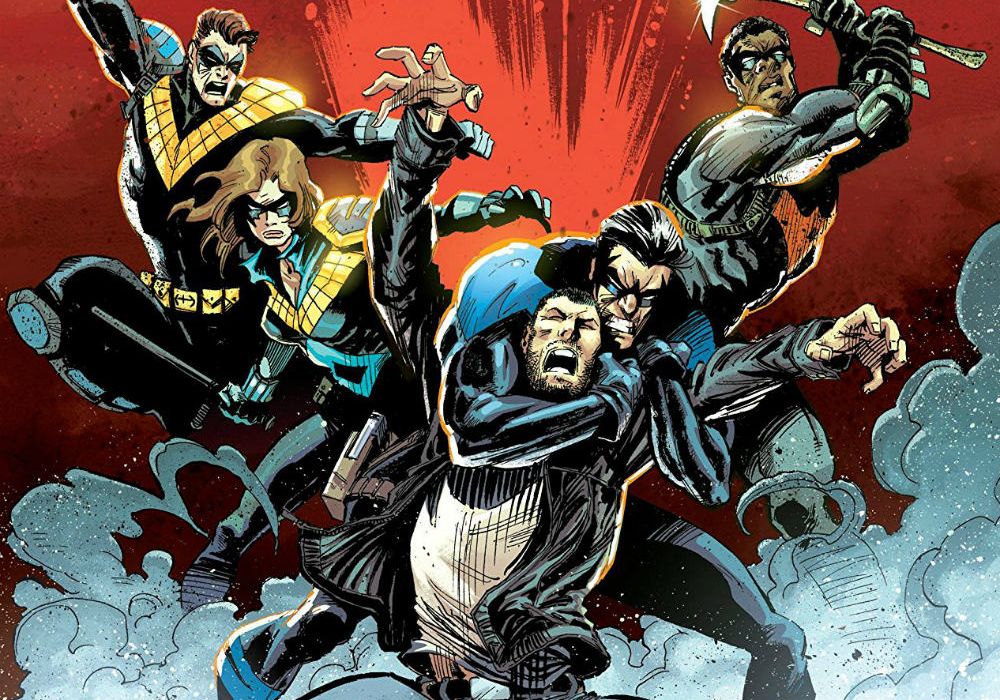 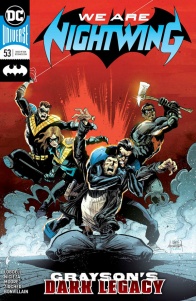 Who is Dick Grayson? That’s the question haunting him after the devastating injury he suffered in Batman #55. Now, as he continues to struggle physically and emotionally, how can he stand against the terrifying “fear germ” unleashed by the Scarecrow?

It’s a familiar set-up — the hero, having experienced some great loss, relinquishes the mantle only to have someone else crop up in their place, yet inexplicably continues to be caught up in the action. What makes Lobdell & Nicieza’s take on the trope, combined with their semi-unique take on superhero amnesia, intriguing is that Grayson isn’t giving up the mantle out of disgust or anger or sadness but simply because what he has lost is his connection to the costume and the costumed life.

Much of this was established in previous issues but it is pertinent to bring back because “Nightwing” #53 spends much of its page count spinning its wheels without developing this idea further or diving deeper into the ramifications of Grayson’s disconnect with his former life. Nor does it do what it began to set-up in issue #52 or on the cover and develop the new Nightwings. The events of the issue jump from one to the next without much connective tissue, relying too heavily on Nicieza’s scripting to carry the emotional weight of the story.

Take the bar scene. Grayson talks about how when other like Barbara and Alfred look at him, they see Dick Grayson and not Ric, whoever that is. It’s an important moment, as it’s a theme that many people can identify with, but it’s handled via three or four static, page-wide panels that have been crammed full of dialogue balloons. The art, thankfully, is able to assert itself but the neutral faces and mundane setting reduce the emotional heft, leaving only thoughts and ideas hanging in the air.

This entire scene could have been a decent chunk of the issue, were it allowed to breathe. Moore and Zircher show later on in the issue that they have the chops to render small emotions — a tiny smile, eyes that say more than the words coming of a person’s mouth, a head turned up to bask in the sunset & breathe in the air of a new day — with panels that, were it not for the narration, act as silent buffers, giving insight into the characters. It deepens their presence and makes them more than just actors in whatever grand adventure is lurking in the shadows.

I do have some complaints about their character work in the early pages. Grayson’s character model is off, his chin too square and his body too bulky. I had trouble determining who he was at first despite all the obvious indications that he was Grayson. In addition, the new Nightwing, whose name appears once in this issue, looks more like Grayson than Grayson. The other characters are fine, although Scarecrow has looked substantially different across all three (four? Was he in “Nightwing” #50) issues of this arc. His storyline is by far the weakest part of the issue, distracting from the other two, more interesting narratives at play.

These two largely competing narratives, with a third brewing in the background, were balanced well in issue #52 but are muddled in issue #53. The new Nightwing is not given near enough panel time and it feels as if large chunks of his narrative were cut between last issue and this one. Were the fight with Grayson & the bad-guys to have been from the new Nightwing’s perspective, more would have been gained about his character and his narrative would have been furthered.

In essence, there is too much going on in “Nightwing” #53 and all the wrong things are focused on. Much of the opening pages is spent having Ric & Nightwing verbally spar and then rescue the kidnapped cabbie. Nothing is gained from this, other than showing how out of his depth the new Nightwing is, as Nightwing is not the focus of the issue — Grayson and his many new friends are.

It’s indicative of a bigger pacing and perspective problem with this entire run, not helped by the ever changing artists, which greatly affects the tone of the issues. Last issue was action heavy but Mooneyham’s control of perspective, angles and intra-panel motion allows for it to remain dynamic and to accomplish much with small page counts. This issue is also action heavy but the control isn’t there. It’s all very stiff; the camera is kept too close to the characters, the shifting angles are chaotic and the environments are lost to empty backgrounds, making it harder to follow the lines of action.

These problems are compounded in the final pages as we’re once again treated to a reveal of the scarecrow who has Thanos/Tom-King-Bane-syndrome, appearing in an ominous way only to disappear without doing anything substantial. It’s detrimental to what would otherwise be a different take on the end of Priest’s “Black Panther” run and on a very different status quo shift for Grayson.

Final Score: 5.9 – “Nightwing” #53 fails to impress, focusing on too much of the wrong thing. There are the seeds of a good story here but it’s being drowned and crushed by dialogue and pacing issues.