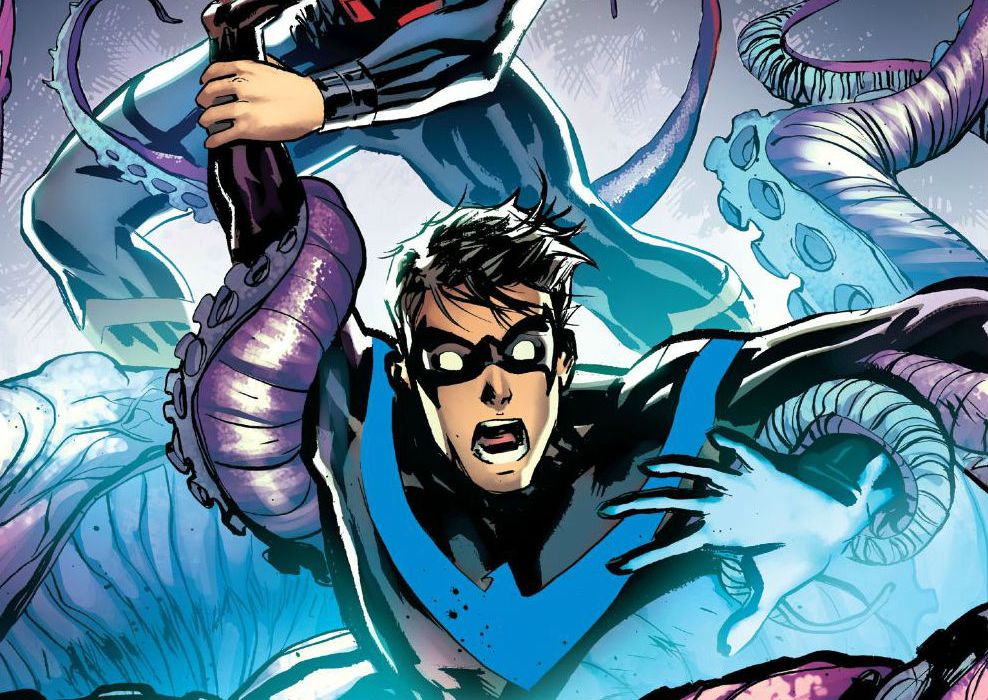 Before the trip to Bludhaven, Dick Grayson begins to have nightmares. He and the Pre-“Flashpoint” Superman team up to take on the demon within Nightwing’s head. 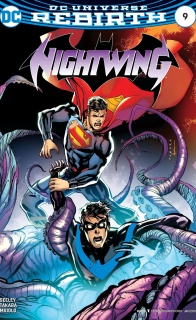 “FACING DESTINY”! In this single-issue tale, Nightwing is being attacked in his dreams by Dr. Destiny, and the only person who can help him is Superman! But following Nightwing’s confrontation with Raptor and the aftermath of “Night of the Monster Men,” can Nightwing trust a Superman he doesn’t know-or will his lack of trust get them both killed?!

Oh, that may have given away some of my opinion on the issue, but it doesn’t make it any less valid. After finding “Nightwing: Rebirth #1” to just be kind of middling, I thought it would be a good idea to check in with this series now that it has its gears going and wow, it is truly amazing how well Seeley has managed to keep Dick Grayson. It is the same strong characterization from “Grayson” that continues to be the highlight as he encounters the Once-And-Future Man of Steel.

Superman and Dick have always had a fun relationship. The mantle of Nightwing comes from Kryptonian mythology and, in the pre-Flashpoint universe, the argument could be made that it was Dick that was the beating heart of the superhero community, more so than Superman. That idea is expanded upon here as Nightwing and the Pre-Flashpoint Superman team up to fight Doctor Destiny, all the while trying to figure out one another. It is a fun adventure into Dick’s dreams, his fears and anxieties and how he’s been dealing with the aftermath of Raptor, the Monster Men and what happened to Tim Drake. But it’s also an adventure into Dick’s strengths, the confidence he has in other people and his optimism.

It’s a good thing that the book is so central in examining character (especially a nice moment where Sups gets the “Nightwing Bump” -basically Nightwing thinking this new/old Superman is okay holds a load of weight with someone as paranoid as Batman), because, in all honesty, the plot of this issue was kind of mediocre. Nothing bad, but nothing that hasn’t been done before. Following up on that, the villain’s, Doctor Destiny, is also fairly mediocre. It’s almost at times when he does show up, it interferes in what the book wants to do. There are bits where it works, but the times where it’s just Dick dealing with Doctor Destiny does feel like a drag.

As for the artwork, I have to say, I felt like it had its hits and misses as well. I like guest pencilist Marcio Takara and I like colorist Marcelo Maiolo, but I feel like having the two work together may not have been the best thing. Takara’s smooth, fluid pencils have always felt like a treat and there are some clear examples of that here, such as the full page splash of all the heroes that Dick has as allies. But then in other cases, such fight scenes, the pencils feel unusually rough. This may be the price we’re paying for double-shipping finally starting to sink in as script and art turn-over increases more and more.

As for the coloring, like I have said, I like Marcelo Maiolo and the idea of his high contrast colors in a Nightmare On Elm Street-esque story such as this sounds great, but in practice, it’s a different stories. It has some good moments, such as the aforementioned high-contrast shots (like his works in “Green Arrow” and “Old Man Logan”) to convey horror and darkness, but it’s when we get to moments that are optimistic and uplifting that the colors seem a bit too dull for the emotion it wants to convey.

When you think of the deeper meaning behind this issue, the nature of Dick Grayson as well as his relationship with the Supermen of Pre/Post-Flashpoint, it soars. It’s core is one of optimism, of being able to conquer one’s fears and doubts even in the face of such overwhelming odds. And while the core is real good, the surrounding bits are what were very shaky. It makes for a decent issue, as well as a real good jumping-on point.

Final Verdict: 6.5- With a heart as big as Dick Grayson’s, the issue unfortunately can’t shake some okay artwork and a mediocre villain.