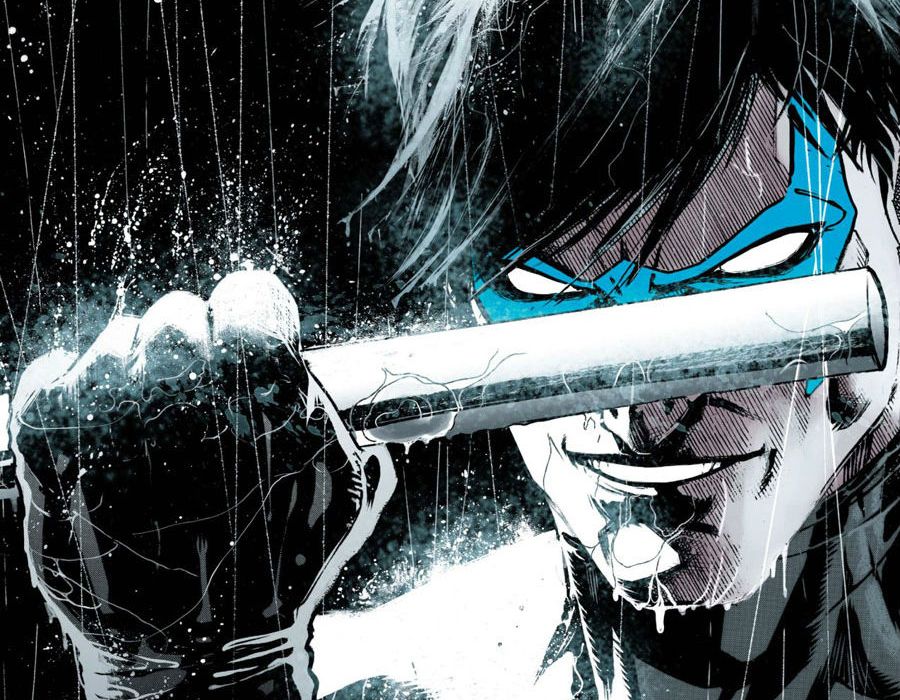 Robin, Batman, Agent 37. Dick Grayson has been all of these, but now the DC Universe’s Greatest Son is back in blue. How does this reintroduction issue fair? Let’s find out. 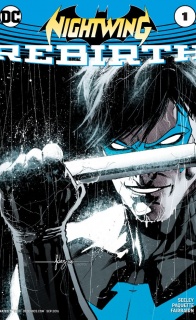 He’s been Robin, Batman, a spy, a ghost. Now, Dick Grayson returns to Gotham City to reclaim the life that was taken from him. But when a new evil threatens those he loves most, Nightwing faces being torn away from home once again in order to destroy the dark force once and for all. Powerhouse artist Yanick Paquette (BATMAN, SWAMP THING) joins series writer Tim Seeley (GRAYSON, BATMAN & ROBIN ETERNAL) to return Nightwing to the DC superhero stage!

There is the prevailing (if flawed) train of thought among people that Bruce Wayne is the mask for Batman. That his true focus is forever in that superhero world. I see Dick Grayson as the opposite. That, regardless of his persona — whether Robin, Batman, Agent 37 or Nightwing — it is all one man that doesn’t change.

That is something Tim Seeley gets to the heart of in this issue. I’ll be honest, this issue felt like an amalgamation of “Grayson Epilogue” with “Nightwing Prologue”. It is all about closing the doors on Spyral and Helena Bertinelli (she herself will be a character in “Batgirl & the Birds of Prey”) while bringing over the best aspects of the “Grayson” series. It’s rather apt that Seeley writes this: it makes that transition come smoothly, for the most part. He delves a great deal into the history of the name “Nightwing”, often considered a Bat-Mythos staple, but the truth is that it actually comes from Krypton mythology, the Great Rebuilder, a catalyst for change. It has always fed well into Dick’s ever-changing scenarios and it is exposited here in a good way, building on what I said above in it being another role for Dick.

Seeley also has a good handle on most of the characters. Makes sense since they’ve all been prevalent throughout “Grayson”. His antagonistic/flirtatious relationship with his Arch-Frenemy Midnighter is as fun as it has always been and makes me glad to know he’ll be a recurring character in “Nightwing”. I wish the moment between Dick and Helena had a bit more emotional resonance for me, since it was more about setting up Helena for her upcoming role as the Huntress.

Weirdly enough, the one character here that felt off is Damian. What is so weird about it is that, on paper, the interactions between Dick and Damian aren’t bad. They easily are capable of bouncing off one another and Seeley continues to show why they work together so well over the years. I think Seeley goes a bit too hard with Damian’s voice. He has a very distinctive narrative voice and I have seen it done pretty badly in some cases (or in some, just disregarded for standard Robin voice). That isn’t what happens here, Seeley does get the voice, just I felt it went overboard on occasion. Think the one part that really stood out was when he was yelling at the machine in the arcade. It just came off as weird. That said, with Damian also confirmed to be a character in the book going forward, it’s something that can be tweaked going forward.

Now, Yanick Paquette and colorist Nathan Fairbairn are one of my favorite duos in the Big 2. Their artwork was the best aspect of “Wonder Woman: Earth One” (considering the long wait for that left the world very deprived of their collaboration). There’s always been an elegance to the work, not only in characters but in paneling too. Combine that with such a brilliant color palette, this is the kind of art team that should work great for such a high-flying, high-fun character like Dick.

With all that in mind: This art felt kind of rushed. The paneling is very basic and even some of the facial expressions were a bit janky. Even action scenes don’t have a sense of motion that I can associate with this team. They’re brief, but cluttered. Fairbairn’s colors do remain consistently well-done, but even there I felt like some dull spots. Like with Dick and Damian in the cave, the colors don’t pop out as much as they do in other Fairbairn works. Also, you know considering how much work Patrick Gleason and John Kalisz have done over the last several years to actually make Damian look like someone that is white, Chinese, and Arabic, having him look like Mini Bruce is beyond annoying. In some cases This art does make me question something in regards to the Rebirth issues specifically, how close to the wire was it decided to do these issues instead of just starting at #1?

That does help segue into my final topic about this book: Is it really worth purchasing? Like I said before, this is such a transition issue it does make me question its point. The characters all sound like how they should, but that’s really it. It’s a table-setting issue. It’s about taking most of the good aspects from “Grayson” and applying it here, but isn’t allowed to move plot or characters forward in any true way. The “To Be Continued” line promises the beginning of the story called “Better Than Batman”, I suppose that could be the point of this issue, to show all of Dick’s better qualities which automatically make him better than Batman?

One could make the argument that I’m wrong about the above, but there is one thing that I will criticize that I think many will agree with: the logo. Now, the font itself is fine, if a bit unremarkable. My problem is: If the title/mission statement of your first story arc is “Better Than Batman” then why do you have the Batman symbol as the logo background instead of the blue bird?! It’s such a small thing, but it does kind of betray that.

Final Verdict: 6.5- Well to do table-setting for a hopefully more awesome first issue.