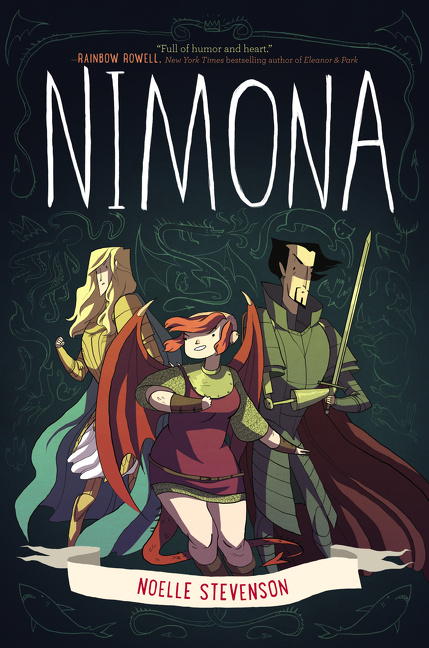 In 2012, Noelle Stevenson started posting “Nimona” online. It originally meant to serve as her senior thesis for the Maryland Institute of College Art, but after she decided to see it through to the end, it evolved into one of the most beloved webcomics available, winning the Cartoonist Studio Prize and earning nominations for both the Harvey and Eisner Awards. It concluded last year and now HarperTeen has collected it all together in a brand new, wonderful to hold, print edition. 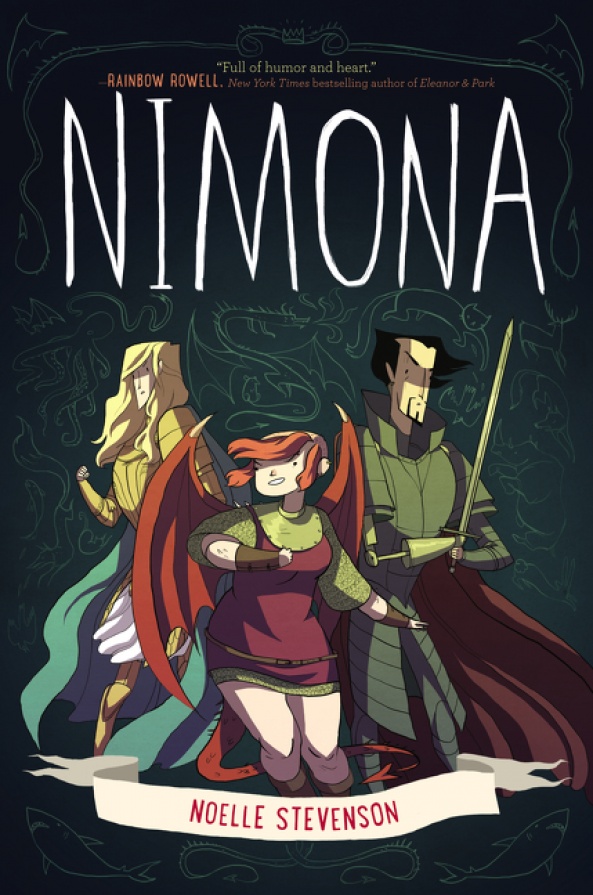 Written and Illustrated by Noelle Stevenson
The full-color graphic novel debut from Noelle Stevenson, based on her beloved and critically acclaimed web comic. Nimona is an impulsive young shape-shifter with a knack for villainy. Lord Ballister Blackheart is a villain with a vendetta. As sidekick and supervillain, Nimona and Lord Blackheart are about to wreak some serious havoc. Their mission: prove to the kingdom that Sir Ambrosius Goldenloin and his buddies at the Institution of Law Enforcement and Heroics aren’t the heroes everyone thinks they are. But as small acts of mischief escalate into a vicious battle, Lord Blackheart realizes that Nimona’s powers are as murky and mysterious as her past. And her unpredictable wild side might be more dangerous than he is willing to admit.

“Nimona” takes place in a faraway kingdom that’s not really fantasy and not really science fiction. That dichotomy basically sums up the tone and setting of the whole book. There’s a king, but he’s more of a background figurehead because the real power is held by this police force called The Institute, who basically abide by the any-means-necessary approach to public safety. (Think along the lines of Nick Fury in Captain America: The Winter Solider.) Standing up against them is one Ballister Blackheart, a self-declared supervillain whose primary motivation is to stick it to The Institute. Years previous, Ballister suffered a gross betrayal at The Institute at the hand of golden boy, Ambrosius Goldenloin (who totally sports a gold codpiece; it’s not that big). Ballister has similar motivations as V from “V for Vendetta” except he’s not nearly as big an asshole.

One day, this mysterious teenage girl crashes his lab, claiming she’s been sent to be his new sidekick, except that she’s much crazier and more villainous and violent than Ballister could ever imagine. Despite trying to be a thorn in The Institute’s side, Ballister still follows a certain set of rules and codes of conduct (which, obviously, The Institute only pretends to respect), which Nimona doesn’t understand and wants to upset. If Ballister wants to be a revolutionary, Nimona is only after chaos.

Yet, regardless of her bloodlust, Nimona and Ballister bond together and form this friendship that influences so much of the rest of the book. It’s the heart of the story, and what eventually helps bring out true tension in the latter sections.

So much of what “Nimona” is about is the middle line between good and evil, magic and science, and love and hate. The Institute happily paints Ballister as villain because they need someone like him to be a villain, even though they’re the ones playing around with some questionable materials. Ballister stumbles across this crazy green-glowing device that scientifically harnesses the power of sorcerers. And Ballister and Goldenloin’s relationship stretches back much further than their arch-nemesis status. Stevenson isn’t afraid to question perception or prerogative in her script, and no one in the story is blatantly benevolent or wicked — except for maybe the giraffe-like Director. For Stevenson, point-of-views and contexts count for a lot toward understanding, and I think that constant questioning of right and wrong helps make this book more interesting, especially for any younger readers who seek it out.

But it’s not a dark book by a long stretch: “Nimona” is funny — incredibly funny. Stevenson devotes pages to witty banter and one-liners. (“UNHAND THAT SCIENCE!”) She packs her panels with a Rob Guillory level of background jokes and gags, a remnant from the web days when we would only get an update on Tuesdays and Thursday and I think there was a feeling that each frame should have something more to offer for people pouring over the page, waiting for the next update. She has Nimona shapeshift into a shark, with her breasts still intact, and poses Goldenloin in the most ridiculous running stances, and I think you can feel her cracking up from beyond the page at what she’s drawing.

The story feels like it’s coming from a creator who’s exploring different methods of telling a story while simultaneously figuring out what a story can do. While the narrative in and of itself doesn’t come off as experimental, there’s definitely a “see what sticks” approach. So the book starts off in a series of Sunday page-esque vignettes, with punchlines and jokes ending the pages, then moving on to a series of wacky adventures, small interpersonal moments, before finally settling in as an emotional epic. Stevenson finds the proper rhythm and tones in the backhalf of the story. By that point she was probably a well into its production.

Most of the time, this lets the book feel playful and energetic, though there are times when it feels like some random, tangentially interconnected scenes. Stevenson does manage to find a way to tie it all together by the end, but there are definitely times when the sequence doesn’t feel as assured or confident.

Luckily, Stevenson hides much of that in her art. It has a very old-school chapter book feel, mixing elements from Quentin Blake, Louise Fitzhugh, and Jules Feiffer, with the sketchy, often-thin lines and bright color schemes. The figures are exaggerated, with their triangular heads and size 12 waists, with malleable elbows straight from Adventure Time. Stevenson’s big on gesture drawing, which definitely gives each and every character, whether in the forefront or the background, their own personality and presence. It’s very effective, especially during later scenes where Stevenson packs her frame with people and action.

As she goes on and “Nimona” becomes more confident in the story it wants to tell, Stevenson’s art also becomes more assured. Already, she redrew the opening chapters for the print version and if look at that against the original chapters, it’s evident she made huge strides with this story. I noticed as I read this time around was the staging shifts from the practically backgroundless close-ups at the beginning to the filled-out wide shots appearing in the last act. Watching Stevenson’s abilities grow and evolve over the course of this story is as satisfying as the character arcs.

“Nimona” is a great book, filled with wonder, adventure, humor, and pathos. Since this, Stevenson’s profile as grown exponentially, but with any cartoonist (rather than a collaborative team), her best work comes from her working with words and pictures to deliver the best story possible. And Stevenson delivers highly with this book.