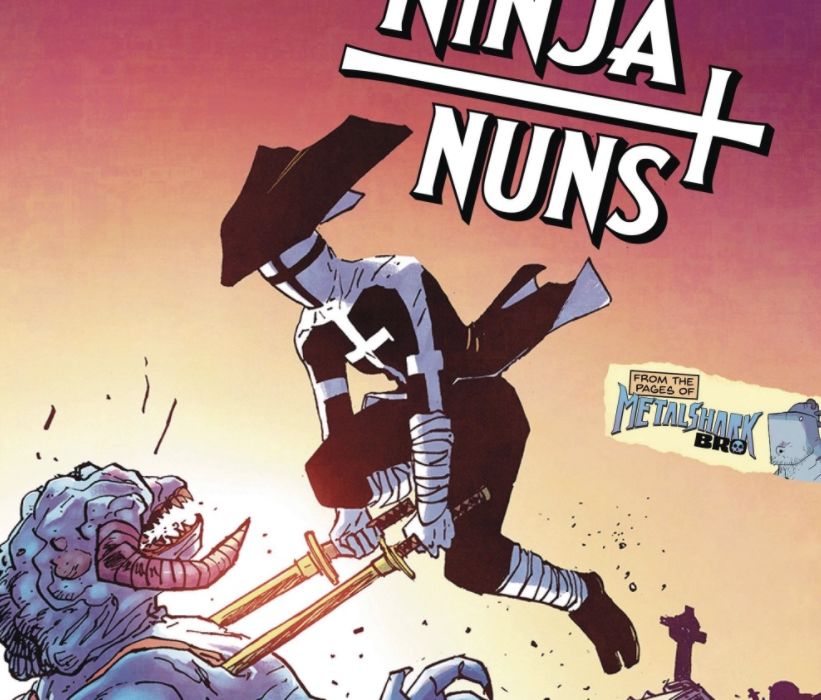 “Ninja Nuns: Back in the Habit” #1 is a delightful collection of shorts featuring our most holy warriors from the “Metalshark Bro” universe. Unsurprisingly, they whup some serious butt. Warning: spoilers ahead. 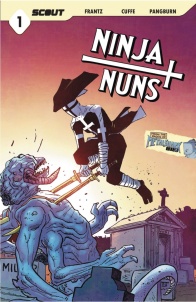 Cover by Jason Copland
Written by Chas! Pangburn, Bob Frantz & Kevin Cuffe
Illustrated by Tony Gregori, Dann Franco, John Burgin & Angela Sprecher
Colored by Josh Jensen, Gabriel Calfa, John Burgin & Angela Sprecher
Lettered by Chas! Pangburn Did you accidentally summon a vengeful demon from another dimension? Have you recently committed heresy and started a church rave? Did your neighbor gain powers from a noodle god? If you answered “yes” to one or more of these questions, then you need to pray for assistance from the Ninja Nuns! Rising from the pages of Metalshark Bro, these heavenly sisters star in an action-packed one-shot that hits harder than Sister Mary’s ruler across your poorly-behaved knuckles!

“Ninja Nuns: Back in the Habit” #1 (hereafter “Ninja Nuns” #1) delves into the esoteric and extremely violent world of our favorite murderous Sisters to good effect. It’s rare that a collection of shorts delivers without any fat, but “Ninja Nuns” does so with the same style Pangburn, Frantz and Cuffe delivered in “Metalshark Bro.” “Nun the Wiser,” “Rise of the Discomancer” and “Far Out” all feature the Nuns on missions directly from the Vatican. Their aim? Stop some creepy crawlies from entering our dimension and messing with reality. Or our bowels (more on this in a bit.)

“Nun the Wiser” sees one of the sisters on the hunt for a sorcerer who’s summoned a god – turns out, it’s the god of slow constipation instead of wealth and prosperity. Oops! Toilet humor can be a hard sell in comics. It’s all been done with varying degrees of success, so keeping the reference as a one-off is a nice change of pace from a comic insisting we get a joke by beating it into the ground. Pangburn delivers some thoughtful meditations on faith and religion in the narration to contrast the otherwise snappy dialogue, and Gregori’s cartooning and creature design are tight and imaginative. Jensen pops a panel or two with a single-color background that actually works, and the Nun’s a nice contrast in black and white without feeling too cartoonish when she flexes her skills. Finally, Pangburn’s lettering suits and there are some crisp sound effects in between monster spittle and sword slashes that get the job done.

“Rise of the Discomancer” is right out of a Silver Age Flash comic in a good way. As it turns out, Mary Magdalene was actually a sick DJ in her day, and all the Discomancer wants is to throw a proper rager. The Nuns show up to put the kibosh on the blasphemous rave, and hijinks ensue. Frantz and Cuffe deliver the goods with their particular blend of knee-slappers and absurdity, and the mash-up of religious imagery and turntables works far better than anticipated. Franco’s art is a little less cartoonish – save the excellent stained-glass style panel later on – and sketchy enough that the Nuns feel like a cohesive part of the larger story, and universe. There are a lot of good action lines and shading on the splash of Discomancer’s reveal, and the “bass drop” repeats this effect later on. Calfa gets to play with some swampy, creepy hues for Mary and some poppy rainbow brights during the party scenes, but some of the backgrounds don’t have enough texture to support Franco’s line or nail a cohesive visual experience. There’s nothing here that’s bad, but a little more work to muddy things might have been the way to go. Pangburn’s lettering features some great style on the Discomancer’s title and a few key lines. The “bass drop” is a great big “BOOOOM!” that feels just a bit slick for the page, but it also needs to stand out from Franco’s line to be readable.

“Far Out” sees the Nuns track down a captured noodle god who’s not at all a reference to the Flying Spaghetti Monster, and whose “R’amen!” is a lovely Lovecraft riff in line with the short’s overall tone. Burgin’s art is delightful, frankly, and the marker-style colors suit the line and the daytime glow of the music festival. Cuffe and Frantz put their imaginations on full display with a cheesy band manager villain and a monster that won’t stop making pasta references or just shut up, really. One of the Nuns touches the psychedelic beast and ends up flying, the Bishop smokes a stogie and the festival is a smorgasbord of hippie weirdos freaking out in the background. Pangburn letters some narration right into the opening panels that works pretty well, and the chosen font is peaky enough to blend well with Burgin’s line. One minor narrative quibble: this short should come before “Rise of the Discomancer,” as Sister A.C.T.’s name doesn’t make any sense without the reference in this story.

“Con Crud” is a quick bonus story that rounds out the issue by looking at how critiquing someone’s cosplay can get you into a world of hurt. This short is just a few pages, but it rounds out the collection with the Nuns visiting a comic convention and getting into it with a few judgmental fans. Frantz and Cuffe shoehorn in some quick shilling for another Scout comic (“White Ash”) in fine comics tradition that makes this short feel a bit like an ad in a good, cheeky way. A fan gets flattened for his mouthiness, and the Nuns go on their way to enjoy their day. Sprecher’s art is poppier than the previous shorts and suitable for the story’s location, and Pangburn chooses a standard font that doesn’t distract from the action.

Overall, “Ninja Nuns” #1 is a great collection of stories featuring some interesting characters who could have otherwise been a one-off band of villains in “Metalshark Bro.” Each Nun has a distinct personality that’s drawn through the collection, the villains are dumb in a good way and the dialogue is both self-aware and joyful enough that the groan-worthy jokes almost always land. Frantz, Cuffe and Pangburn show that they’ve got storytelling chops with this lateral, world-building expansion, and the comedy’s just as irreverent and on point as always.

Final Verdict: 9/10 – “Ninja Nuns: Back in the Habit” #1 nails the humor and grotesque violence we’ve come to expect from the world of “Metalshark Bro,” and each short delights in both style and execution.