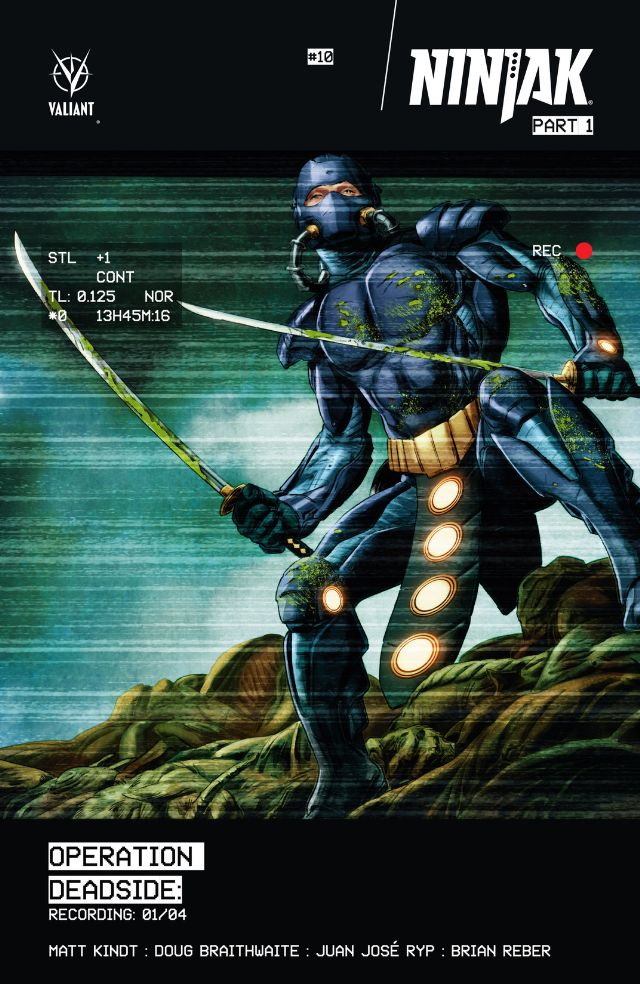 After the, in my opinion lacking, battles with the Shadow Seven, Ninjak is making his way into another world. Just how does he and his occult partner fair? Let’s take a look. 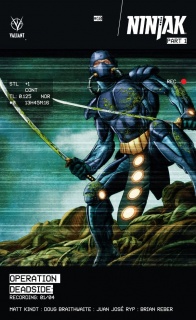 In December of 2015, a covert military intelligence unit sent a team of 20 agents and one special operative into a parallel dimension. Only one came back.

The purpose of their mission was classified. Now, out of options, MI-6 has recruited their most elite operative – codename: NINJAK – to follow the doomed mission’s sole witness back into the dimension called Deadside…and bring her missing teammates home.

What will they find there? And who will be waiting for them? Jump on board here as New York Times best-selling writer Matt Kindt (DIVINITY) and superstar artist Doug Braithwaite (ARMOR HUNTERS) reunite for a terrifying journey into an unknown plane of existence…and bring NINJAK head-to-head with SHADOWMAN in the all-new, four-part epic “OPERATION: DEADSIDE”!

As you probably guessed from the above, I wasn’t too hot on how Ninjak dealt with the Shadow Seven so quickly last arc. It just seemed too easy for Colin King to take out his supposed peers. Having said that, it looks like some of those chickens are coming home to roost as a lot of hints that have been made in small scenes in the last few issues are catching up with our protagonist which will lead him to a place far outside his comfort zone: the Deadside.

The Deadside is essentially the spirit world, the Nevernever (I’ve been catching up with The Dresden Files this week, shut up) of the Valiant Universe. Getting there from the material world is not a small feet, as it sees Ninjak partnering up with someone that has been a bit on the fringes of the Valiant’s books, Punk Mambo, a voodoo priestess introduced in Peter Milligan and Roberto de la Torre’s run of “Shadowman” (more on that later). I did take a liking to Punk Mambo’s utter lack of impressive response to Ninjak being prepared for his second visit to the Deadside with his X-O Manowar inspired armor. They do spark a good dynamic with one another since they’re both kind of similar in their arrogance (although Mambo is throwing me back down the “Is his name pronounced ‘Ninja-K’ or ‘Nin-Jack’?!” pit of madness I had just climbed out of).

And like the Nevernever, the two entering the Deadside is where things start getting really weird and it’s also where Braithwaite and colorist Brian Reber get to go crazy. From the psychedelic (literally, I’m pretty sure psychedelics were involved) entrance to the Deadside to the design work that Braithwaite puts into a variety of locations Over There, including the colossal Loa (essentially a mystical entity) that Mambo conjures up for extra firepower, the artwork lends a kind of softness that makes the transition from material to immaterial all the more seamless.

If there is one thing I could kind of criticize about the art is Ninjak’s Deadside Armor look. I get why he has it. And I know Mambo made that joke that Ninjak’s hanging out with X-O too much, but to me… he looks like the Shredder. Yeah, I know that this armor probably won’t last until the end of the arc, but it just seemed like a bit too much for me.

Now let’s talk the “Lost Files” backup story, art duties taken over by Juan Ryp and Ulises Arreola. Now, there was something fans were anticipating with this arc: the return of Jack Boniface a.k.a. Shadowman. For those of you who have not been caught up with the mystical side of the Valiant Universe lately, Shadowman was not left in a great place when we last saw him in “Shadowman: End Times”. And it shows with his depiction here. It’s a miserable tale with Ryp/Arreola emphasizing the harshness of the tale over the surrealness of the Deadside. Like the main story, it sets the stage for the return and possible rehabilitation of Shadowman.

Final Verdict: 7.0- Kindt, Braithwaite and Ryp begin their arc with a solid foundation as Valiant’s spiritual side makes its return.