After his return from the Deadside, Colin King’s life goes to absolute shit. And as enemies make attacks on every aspect of his life, we ask the question: “Is this a good start to a story?” Let’s find out. 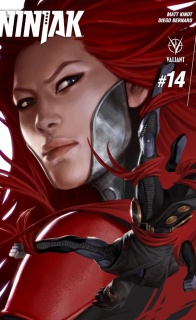 Colin King, the elite MI-6 intelligence operative codenamed Ninjak, has confronted his past. He’s survived the gauntlet of the Shadow Seven. He’s walked into the Deadside and returned a changed man. Now his greatest trial yet will come to pass as the ruthless assassin called Roku returns to lay siege to Ninjak’s present and future by destroying his life from the inside out – and only the death of Colin King will stop her.

“Operation: Deadside” was kind of a bit much. Not bad, but felt that when Ninjak went full blown into the mystic side of the Valiant Universe there was the feeling that the book kind of lost its identity a bit. This issue though feels more like a return to form, espionage and action but with just a hint of that mysticalness.

“Siege of King’s Castle” is the follow up to essentially the first year of “Ninjak” that dealt with the Shadow Seven, and we are now seeing the reprisals from his attacks on the organization and they are nothing if not efficient. Starting with his home, the titular King’s Castle and moving on to his money, his contacts at MI6 and more. It is very much a set-up story to get Colin much more on the defensive than I think I’ve ever seen him. It’s particularly satisfying for me since I had some problems with how easily he took down members of the Shadow Seven during the first year of the book.

Diego Bernard comes onto the book after a run on “X-O Manowar” joined by Ulises Arreola (w/ Pete Pantazis) on colors. It’s one thing to write Ninjak as vulnerable, another entirely to depict him visually as vulnerable. Every bit of weariness, every deflective bit of snark and every bit of determination is on fully display here. Bernard does manage to provide a bit of action in this set-up issue and it all does flow pretty well, managing to get in a few visceral moments courtesy of our protagonist/ninja/assassin.

As for the coloring: I’ve said in the past that I am kind of lukewarm with Arreola’s coloring and this is made more prominent when you have another colorist working on the same issue. I liked Pantazis’ work on this more. There has always been this sense of dullness for me with Arreola’s coloring, but Pantazis kept that espionage tone, but felt more alive than Arreola’s. I really hope this is a transitioning for Pantazis to take over coloring the book. He is an immensely underrated colorist.

The subject of “The Lost Files” backup changes once again as Khoi Pham comes onto the art. We go a bit further back in the past than Colin’s childhood, instead we focus on his parents. As we learn watching Mr. and Mrs. King work, the apple really didn’t fall too far from the trees. Pham and colorist Andrew Dalhouse (w/ Jeromy Cox assists) provided a more fluid and cartoony style really does juxtapose well with the incredibly violent scenes and stone cold precision that our two protagonist display. But like the main story, it’s very much a taste; a lot of setup for two characters we have barely seen throughout the series.

Final Verdict: 7.0- With a return to the espionage side, Kindt, Bernad et. al provide an interesting setup for the breaking down of Ninjak.