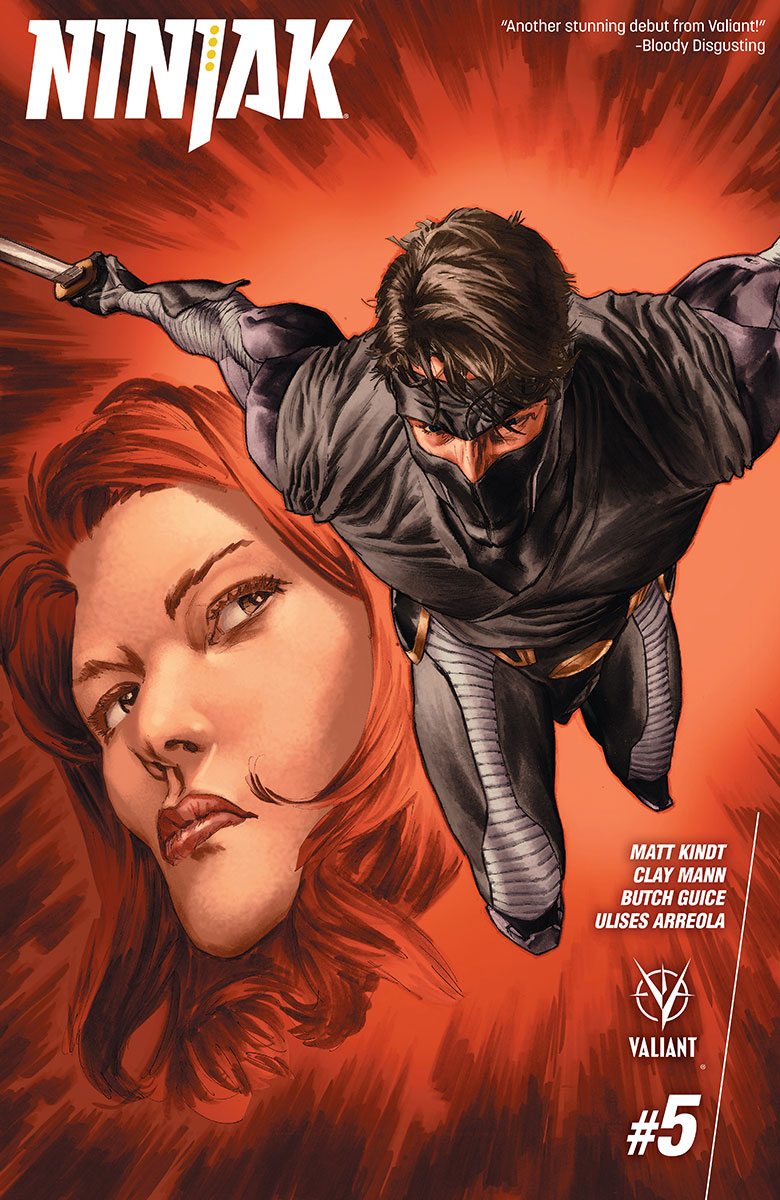 The first arc of Ninjak’s solo comes to its conclusion. But will its end open the door to a much larger game? 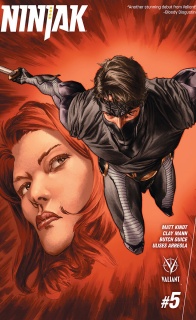 The final secret of the Shadow Seven exposed!

Ninjak’s mission to destroy Weaponeer and its secret cabal of shinobi masters just got a bit more complicated…since the newest leader of Weaponeer is… Ninjak himself?! Meanwhile, Roku’s gone
missing, but we all know the world’s deadliest woman is at her most dangerous when she’s out of sight!

Plus: Colin King’s past comes back to haunt him in a big way as NINJAK: THE LOST FILES reveals a deadly connection to Ninjak’s present as Clay Mann (X-Men) returns with Matt Kindt (THE VALIANT, RAI) and Butch Guice (Captain America)!

I’ll be honest with you: When I first was introduced to the titular character of Ninjak back in the first arc of “Unity”, I wasn’t impressed. Aside from my internal debate on how to pronounce his name (“Is it ‘Nin-jack’ or ‘Ninja-K’?! Tell me these things!!”), I found the character to be a bit one-note, the too cool “badass” that, not unlike Bloodshot, felt more about his own premise than a well-developed character. Sure, ninjas and spies are cool, but it felt like that was all he had.

However, like Bloodshot, the character of Ninjak has greatly benefitted from a solo series and Matt Kindt has begun to really flesh out the character. I have said it on twitter, but I think “Ninjak” is the Valiant book that Kindt has the most fun writing. That’s not to say “Rai” and “Unity” are bad. But considering his previous works with spies and mind screws (“Mind MGMT”) it’s Ninjak where I feel Kindt is in his element the most.

As the curtain closes on the first arc, Ninjak’s cover has been blown before he can complete his mission involving Kannon, C.E.O. of the secret arms dealer corporation, Weaponeer, and member of the Shadow Seven. This has been a problem I’ve been having since this story started: I am still confused as to what’s what in regards to those two terms. So, is Weaponeer one of the Shadow Seven’s controlled entities? And what about Roku? Is she a member of the Shadow Seven while still being Kannon’s underling? I really wished there was a bit more clarity there.

But that is my big criticism of the issue. The rest has been an intriguing look not only in the spy side of the Valiant Universe but into the mind of Ninjak. A big part of that is thanks to the work of penciller Clay Mann, inker Seth Mann and colorist Ulises Arreola. For a book that requires a lot of action, Mann, Mann and Arreola have finally reached their groove in this issue with the final confrontation with Kannon and Roku. There is much more of a fluidity and better choreography going on where I thought the first issue was still a bit stiff. Facial expressions have also improved as the art team has become more acquainted with the characters; especial Ninjak’s more subtle expressions during combat.

Also have to give a nod to the art team’s use of Roku’s abilities. Reminiscent of Medusa of the Inhumans, Roku’s ability to control her very long and very durable hair has been shown to cut, slice, use to climb and to strangle have been lovingly rendered. While it is a shame that she is not as prominent in this issue as #3, it is worth mentioning that this character could be a breakout hit.

When this story first began, Colin King’s childhood came off as… let’s face it… way to Bruce Wayne-like. It wasn’t long before we realized that wasn’t the case. There is finally a bit of payoff here that is well earned, but it only opens up more questions. The aforementioned improvements in artwork are present here as well and I would like to compliment the changes in color palate that Arreola implements here. There is more of a brightness to it, with that slight dark undertone that has become more prominent. It’s a well-done contrast to the neon grit of Tokyo in the modern sections.

The “Lost Files” backups by Kindt, Butch Guice, Brian Thies, and Arreola finally tie-up a thread or two but presents one or two new ones. It is in these backups that we see Colin at his most vulnerable since he’s still green and arrogant (well… okay, he’s arrogant in the present too but shut up) that has now been through the fires and did not come out unscathed. I will say that the main event of this backup did bother me since it’s a well worn trope, but if a theory I have regarding this woman, Angela Alcott, pays off then I can be a bit forgiving. And yes, Angela’s last name is “Alcott”, the same last name as Neville, Ninjak’s current MI-6 handler and the U.K.’s liaison to Unity. This set my mind into several directions, but like the titular ninja, answers will probably illude for a while.

The tone of the “Lost Files” has always been a more grounded one than the main story. No super cool gadgets and no flash and pomp. This is about a man having illusions shattered before him and the art reflects that. Guice and Thies present a darker, firmer style, cased in shadows. This is further emphasized by Arreola setting the mood with a dimmer choice in colors. Dark blues and greys are chief among the color scheme for this backup. The rain, the night, even in a brightly lit office these colors stand out. Don’t think it’s a coincidence that those colors make up the majority of Ninjak’s outfit in the present day.

Final Verdict: 8.5- As the true battle against the Shadow Seven begins, Kindt, Mann, Guice and Co. have firmly established a foundation for Ninjak in the new Valiant Universe.