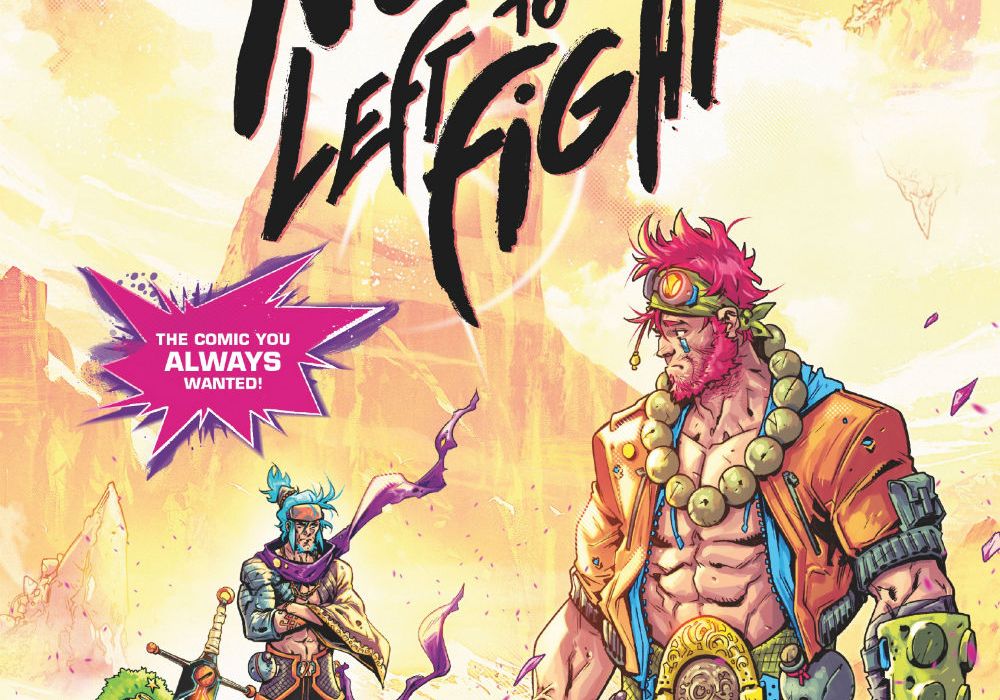 Classic fighting and Shonen manga series like “Dragon Ball” and “One Piece” have always used strength and training as a consistent plot device: one must better themselves to defeat the villain. But what if there’s no one left to defeat? That’s the question Aubrey Sitterson, Fico Ossio and Taylor Esposito are asking in this series. Let’s see how this action exploration and meditation fairs in the dynamic new Dark Horse series. 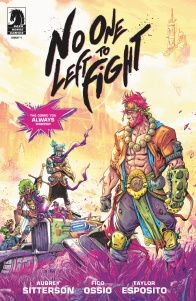 They’ve saved the planet countless times, but what happens after the final battle has been won? Creators Aubrey Sitterson (The Comic Book Story of Professional Wrestling, G.I. Joe) & Fico Ossio (Spider-Man, Revolution) take inspiration from the legendary Dragon Ball to tell a story of regret, resentment, and growing older, one that asks, ”What does a fighter do when there’s no one left to fight?” For fans of Dragon Ball and other fight manga!

Aubrey Sitterson is a clearly a huge “Dragon Ball” buff, and that’s only a good thing in the case of “No One Left To Fight” #1. This comic is so clearly influenced by the colossal manga series, to the point that fans of that series will find a lot to like in this debut. There’s a mix of traditional martial arts with sci-fi elements, shown with the villain-turned-babysitter Fargan VI, there are delightfully named special moves like ‘Blast Barrage’ and there’s an important element of a family at its core dynamic. The latter is well established in this issue, with the kids Tay and Tor and their ‘pet’ Pod bringing a great feeling of levity to the comic, and the relationship between Krysta and Timor showing a lot of trust and faith in each other. There’s also a heavy rivalry between the two protagonists, Vale and Timor, which has developed into a careful camaraderie over their years spent coping with each other, which Sitterson conveys easily without having to rely on years of backstory.

However, Sitterson’s infectiously fun script brings a whole new layer of nuance to the story that even those who haven’t read “Dragon Ball” will find themselves entranced by. Vale, the protagonist of the book, isn’t as carefree as Goku or any other manga protagonists that have influenced his creation. Sitterson weaves a lot of pathos into this character through alienation. It’s never explicitly stated, but we get the feeling that Vale has cut himself off from others due to his intense training. Now that he’s unmatched in fighting ability, he’s feeling the need to reconnect with people like Timor and Krysta’s family. However, we see signs of this affecting Vale’s mindset as he passes out whilst talking about the old days, waking up imagining some heavy flirtation with Krysta, and later seems to hallucinate whilst mid-fight with Timor, showing signs of PTSD from his fighting days. On the opposite spectrum, Timor is now the embittered former villain, who’s paranoid of Vale’s suspiciously happy-go-lucky attitude with his wife and has an inferiority complex to the point that he’ll risk fighting with high powered energy blasts in front of his own children. It’s a complex dive into these characters’ and their relationships and feels fleshed out even in the first issue.

Fico Ossio feels like the natural Western equivalent for someone like Akira Toriyama, yet also takes a lot of influence from other sci-fi and western stories and making it his own, high-contrasted style. The character designs are the most obvious spectacles within the series, and it’s a wonder how Ossio has the energy to draw such complex and interesting design elements each time these characters pop up on the page. Vale sports the typical loose-fitting fighting Gi, but also sports accessories like a championship belt, aviator goggles, a heavy green right glove, and a huge necklace. Similarly, Timor sports a version of the Gi, but with tracksuit pants, a wispy scarf, an intricate arm tattoo, and a rad-as-heck faceplate. We get a great feeling of sci-fi/fantasy fusion with these design elements, but we also get it within the constantly moving setting around the characters. The very first page is a gorgeous splash that I can definitely see some “Naruto” influence in, with a bustling Japanese-style street, packed with cloud-reaching skyscrapers on each side that hide neat little easter-eggs if you spend enough time looking at it (and believe me, you will).

But like with the original influence, what readers will really be looking out for is how well this book is paced, and how intense the action can get. Luckily, Ossio delivers on both fronts. There’s a very freewheeling, manga-style influence to the way the story plays out in this story. Ossio achieves this through some wild panel angling, like moving from Fargan VI glaring down at Vale to the next page picking him up whilst the camera tilts at the angle that Vale was being swept away at. There’s also a lot of attention to emotional detail in the quieter moments, like Vale and Krysta’s chat about the past. In one panel, we see Vale suggestively place his hand onto Krysta’s whilst talking about how important she is to him, whilst in the next, she pulls away, moving the topic to how important the moment was for him. Then we hit the fighting. This is where we really get a sense of “Dragon Ball”, with shots of each fighter sending blows fast enough to appear simultaneously on one panel, giant energy blasts, and satisfyingly big single punches that feel like a pulsing bassline searing through your body. I would also be remiss if I didn’t mention Timor “punishing the salad” as he chops meat at superhuman speeds, a fantastically comedic action scene executed in one panel. Fico is clearly homaging the key influence here, yet adds a lot of clean detail and finishes that it feels like his own unique action style, adding a lot of originality to this debut.

Ossio handles the colors too, giving the series a wild neon and super contrasted sensibility. It feels like the Super Saiyan transformations of “Dragon Ball”, only instead of just influencing hair color, Ossio has spiraled the vibrancy out from not only the characters but to the whole city setting. The neighborhood where Timor lives has a beautifully candy-like warmth with pinks and greens, giving the setting a homely tone while still feeling out-of-this-world fantastic. The fights are filled with superspeed rainbows and kinetic energy that is super fun to look at. My only qualm is that this unstoppable energy is present throughout the whole book, even in smaller scenes like Vale and Krysta’s chat. All these colors and detailed elements make it hard to really focus on the two talking, and it does slow down the pacing of the scene somewhat.

“No One Left To Fight” #1 isn’t just an incredibly exciting passion project, it’s also a great exploration into complex character psyches and relationships, topped off with batshit crazy action to boot. Sitterson has a fantastic love for these characters and treats them with respect, whilst also being unafraid to let their deepest insecurities rise to the surface for everyone to see. Ossio brings it all to scorchingly vivid life, with atomically-powered fight scenes and a great, flowing pace that almost never halts throughout the entire book.

Final Score: 8.9 – “No One Left To Fight” is high-powered and fraught with delicately complex characters, truly the comic we always wanted.