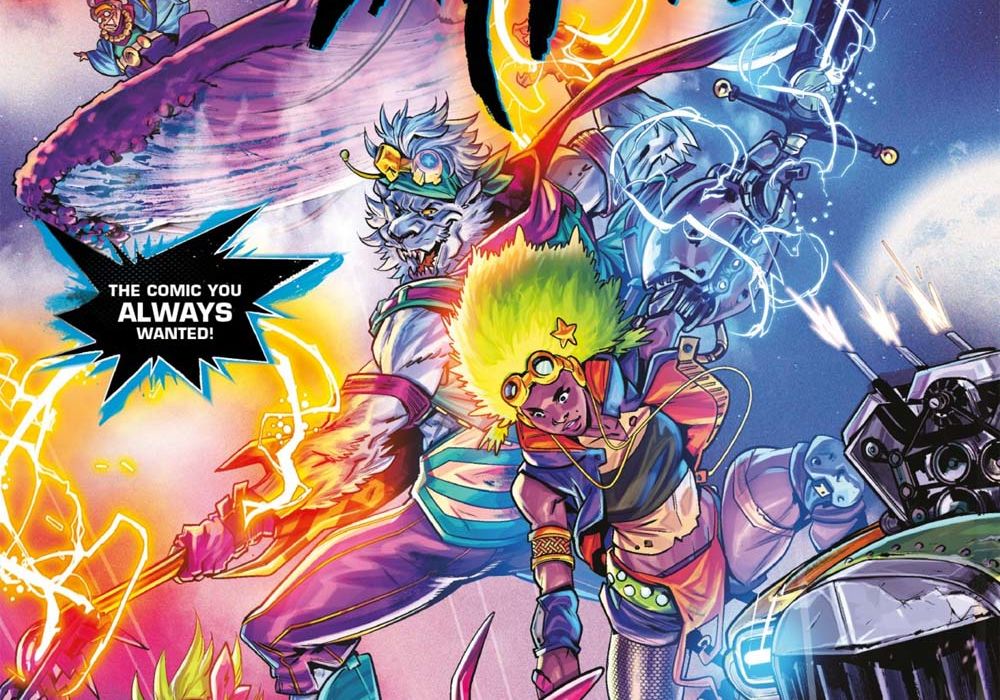 I remember when Dragon Ball Z hit American shores and became the one show every kid between the ages of 5-13 fell in love with. If I could count the number of times I saw people try to imitate the kamehameha I would be wealthy beyond words.

Personally, I never got into it, but I can appreciate it for what it is. The reason I bring this up is because the people who grew up on these sorts of shows are now all grown up and writing stories of their own, and nowhere is that more apparent than with today’s book: “No One Left to Fight 2” #1

The comic you always wanted is back courtesy of creators Aubrey Sitterson (Savage Hearts, The Comic Book Story of Professional Wrestling) and Fico Ossio (Mister Miracle, Spider-Man). This volume picks up where the smash-hit, critically acclaimed first Fightverse series left off, with the world’s greatest fighter struggling to find his place after all his battles have been won and while there’s still time left.

• This series features alternate covers by Fico Ossio, which combine into an all-new interlocking image!

“A loving tribute to the Dragons Ball and Street Fighters of days past, with colorful art and a joyously explosive story.” -Major Spoilers

“No One Left to Fight 2” #1 opens at the end of what was the big climactic fight at the end of the first arc. The main characters, super fighters Vale and Timor have triumphed over evil, but not over the jealousy in their hearts and dealing with the trauma of getting literally ripped in half. Also, there’s a girl named Krysta, because of course there’s a girl. Meanwhile, the children of the main characters continue to train under the supervision of their wise old mentor, who seems to be a beach apparel wearing alcoholic crab person. Let the emotional outpouring commence!

“No One Left to Fight 2” #1 is written by Aubrey Sitterson, and it’s very clear that this is a comic that means a lot to him. Sitterson has created a comic with a ton of high octane energy and characters that feel like they would be more at home on a Saturday morning television program filled with repetitive action and epilepsy inducing lighting. However, despite all the bombast and momentum, Sitterson does take the time to have the characters slow down and bear their souls to each other, and it works. Despite the fact that Vale and Timor are combat gods, they seem to have quite a few unresolved emotional issues between each other that go a lot deeper than the girl they’re fighting over. It may be a quiet moment that only lasts an issue or two, but it’s a well written emotional payoff that works.

If “No One Left to Fight 2” #1 has any problems, it’s that it’s a comic in the middle of a larger story and doesn’t give new readers a chance to catch up. Sitterson alludes to the climactic fight throughout the book, but it seems that this story would have benefited from a prologue page or something resembling a “previously on…” preface that usually started an episode on these types of shows. It’s still a good book, but it’s definitely a book for readers already invested in the series.

The artwork for “No One Left to Fight 2” #1 is absolutely bonkers. The art is provided by Fico Ossio with colors by Raciel Avila, and they seem to have taken the premise of making a tribute to a fighting manga and cranked it up to eleven. While the artwork has manga elements when it comes to the facial features and motion lines, the style mostly sticks to a hyper realistic portrayal of anatomy and wild alien plants and beings. Everything about the art and color screams motion and energy, even the parts that are supposed to be still and contemplative feel like they’re going to jump off the page. Special mention goes to the coloring scheme, which takes all the best parts of a blacklight poster and a Lisa Frank folder and creates artwork that really pops out from the shelves. It’s the perfect art style for high intensity, adrenaline pumping action and is sure to get any reader’s heart pumping on the first page.

While the artwork on “No One Left ot Fight 2” #1 is perfect for the kind of action this story wants to invoke, this is a part of the story that is supposed to be quiet and a bit still, and here the artwork kind of stumbles a bit. While Ossio does use a lot of close ups and face shots to make sure none of the emotion is lost, there is so much going on in each page that the book can quickly become overwhelming for some readers. It’s a very tricky thing to find the right blend of high octane energy and quiet calm to make a book tell a great story, and it seems “No One Left ot Fight 2” #1 has decided to go all in on high energy, which can make the slower parts suffer.

“No One Left to Fight 2” #1 is a very specific book for a very specific fan of popular culture. If you love fighting manga and shonen anime from the 90’s and early 2000’s, you will definitely love and appreciate this book. For the rest of us, there is some gorgeous artwork that doesn’t always pair well with the writing, but it’s still got some great moments with some great characters.

Final Verdict: 8.6- The writing and characters are solid, but the pace is slow when paired with artwork that screams for action.