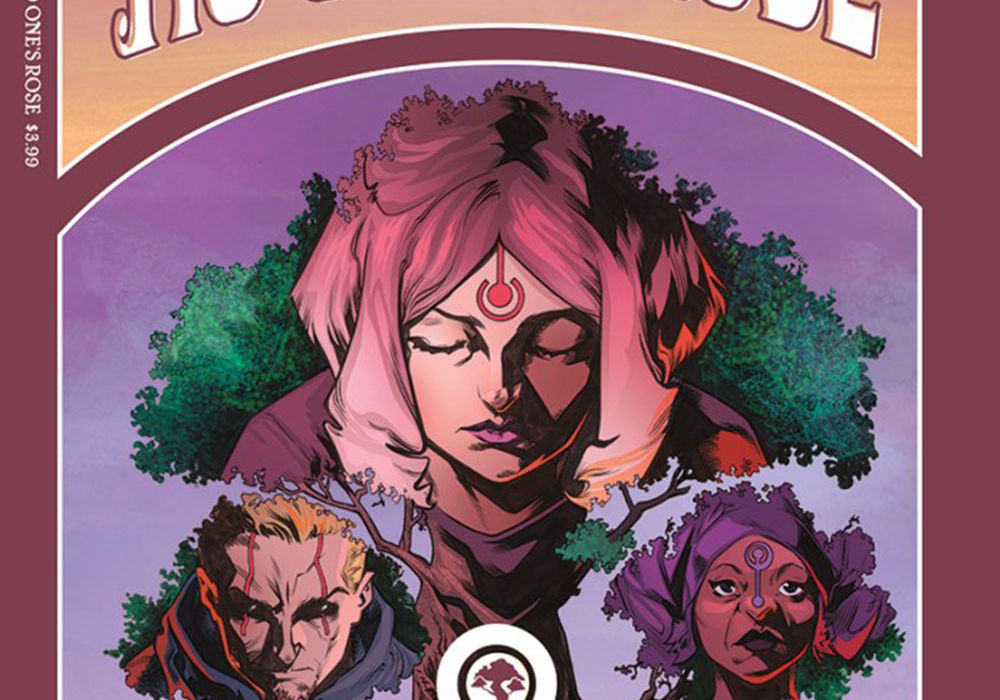 Eco-speculative fiction is a concept that has risen to popularity in the last few years given the growing environmental problems around the world. It’s a fascinating idea that has permeated things popular texts in multiple mediums, and this time around has entered the field of comics with “No One’s Rose”. Thompson and Horn paired with the art team of Alberquerque, Angulo, and Otsmane-Elhaou, have the heady task of creating a world that mixes this trope with the decidedly more hopeful genre of solar-punk. Let’s see if they have the chops to pull it off! 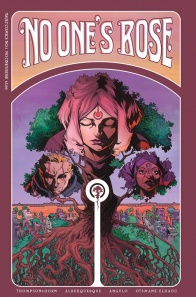 Centuries after the fall of the Anthropocene, the last vestiges of human civilization are housed in a massive domed city powered by renewable energy, known as The Green Zone. Inside lives teenager Tenn Gavrilo, a brilliant bio-engineer who could rebuild the planet. But there’s one problem: her resentful brother Seren is eager to dismantle the precarious Utopia.

From the minds of Zac Thompson (X-Men, Yondu) and debut writer Emily Horn with artist Alberto Jimenez Alburquerque (Letter 44, Avengers) comes a gorgeous and green solar-punk world filled with strange biotechnology, harsh superstorms, and divisive ideologies—ideologies that will tear Tenn and Seren down to their roots as they fight for a better Earth.

What I love about the world that Thompson and Horn have created here is that it’s so instantly fascinating and immersive. Within the first ten pages, the narrative manages to switch perspective about three times, yet each scene feels perfectly encapsulated in giving the readers a sample of what to expect within the world of “No One’s Rose”. The opening sets up the post-apocalyptic tone nicely, with dark, but uproariously punk narration via Tenn, one of our protagonists, that accompanies the splashes of color popping from a much more monotone world really nicely. We then switch to Tenn’s direct perspective, as a teacher leading kids on a potentially fatal study mission, that already suggests the idea of a built civilization within the story somehow, even just from the calm and structured way the teachers are talking. Finally, we switch to her brother, Seren’s perspective, which shows us a side of the civilization that drastically contrasts the world we previously saw, giving readers more world-building mystery to speculate on and gradually learn about through nicely-paced dialogue.

The characters here are pretty great and believably written, too. Thompson and Horn find a way to balance the focus so that each of the siblings feels like they have their own agenda and have enough screentime that they both feel like main protagonists. Tenn has an undeniable likeability from the start, just in being endearing by teaching kids and having an attitude of always striving for something better. I love that we spend time with her not just in her research field, being snickered at in the background or being outwardly congratulated, but we also see Tenn on her commute home, feeling insecurity and concern over her familial situation. Seren works well as the almost exact opposite, being the veritable anarchist of the family. His bad-boy personality gives him a certain charm that makes him stand out against this generally good-natured world. Adding to that, seeing him steal a kiss from his boyfriend by climbing into a tree with him to avoid surveillance almost certainly made me weak at the knees. Yet he’s also got an acute worry for his sister, consciously or not, that keeps him from feeling annoying and keeps him grounded as a thoughtful human being.

Alberto Alburquerque is a huge draw for this book and has such a clear sense of visual style and aesthetic that is rarely seen for a debut issue. This is cleverly set up in the first few pages, where just like the narrative, we go through a few key different settings and motifs. On the first page, there are some easily identifiable post-apocalyptic trappings afoot. Collapsed buildings, jagged landscapes, tumultuous weather, this book unashamedly gives you all that very early on, almost to clear it from the table. Because even by the very end of this page, and once you turn to the next, hints of a more original influence trickle in. Alburquerque is smashing together classic fantasy/medieval armor with these solar-punk visuals that I have a newfound love for, before building even more on this vivid fluidity the next page by having an oil-looking substance melt this unnamed character into a visceral, psychedelic mess. Yet once we get to the Green Zone, the style is much cleaner, from the regal containment suits to the smooth technology, with just a hint of controlled vegetation creeping in.

The way that Alburquerque uses this vegetation in different ways throughout the issue is really a masterclass in dynamic storytelling and worldbuilding because there’s so damn much of it drawn in so many unique ways. The Branstokker (a delightfully on-the-nose name in its own right) works like a giant, tradition Yggdrasil/World Tree for the Green Zone, and has a wisened, ancient feel to it despite being bio-engineered. Then, we see the vegetation levels in scenes as indicators for the levels of both class and actual verticality are signified. The lower level is a wild place, with bushes spilling from corners and erupting from the pavement. The Mid, which is the train station level, has some overgrowth but seems more controlled and used for the visual aesthetic. Think creeping vines spilling from giant department store buildings and various trees growing all around them, but without directly interfering with the architecture. The upper level, whilst looking very neat, is also the most groomed level in terms of vegetation, with rows of trees planted in very carefully maintained ways and little to no spillage onto the man-made area around it. It’s great attention to detail visually that implies something isn’t quite right with this world, especially considering the supposed harmony with nature.

Raul Angulo’s colors have a natural, muted beauty to them that really works for the solar-punk genre that is being conveyed in this book. The palette is brilliantly contrasted at the start, with the vibrant, punk colors of the unnamed character popping vividly against the aggressive greys of the backgrounds. Then we have some beautifully single-colored scenes, like Seren’s first scene being coated in a shade of green to suggest wild nature and the cold aquamarine of the sewers beneath the upper level, which glows with luminescence and gives off a very ethereal quality. Otsmane-Elhaou is no slouch in the lettering department, either. There are some great little moments, like Seren’s playful, visually buoyant singing of Hungry Like The Wolf, and Tenn’s subsequent sharp but annoyed lettering in response. On the opposite end, there are some great sound effects throughout, like the sharp, cold lettering in the sewer scene that evokes a wave of freezing water crashing over you.

“No One’s Rose” was a debut that surprised me with the depth of thought and intricacy that went into every aspect. The world is keenly thought out, with great characters that balance each other well right from the start. The art has an immensely bold visual style that demands the readers’ attention as it blasts away all post-apocalyptic stereotypes, and the colors and lettering are dynamic and bold that they make this book feel familiar yet completely within its own.

Final Score: 9.0 – A stylish debut that nails every aspect of what a debut issue should be, whilst leaving intrigue for plenty more story on the horizon.