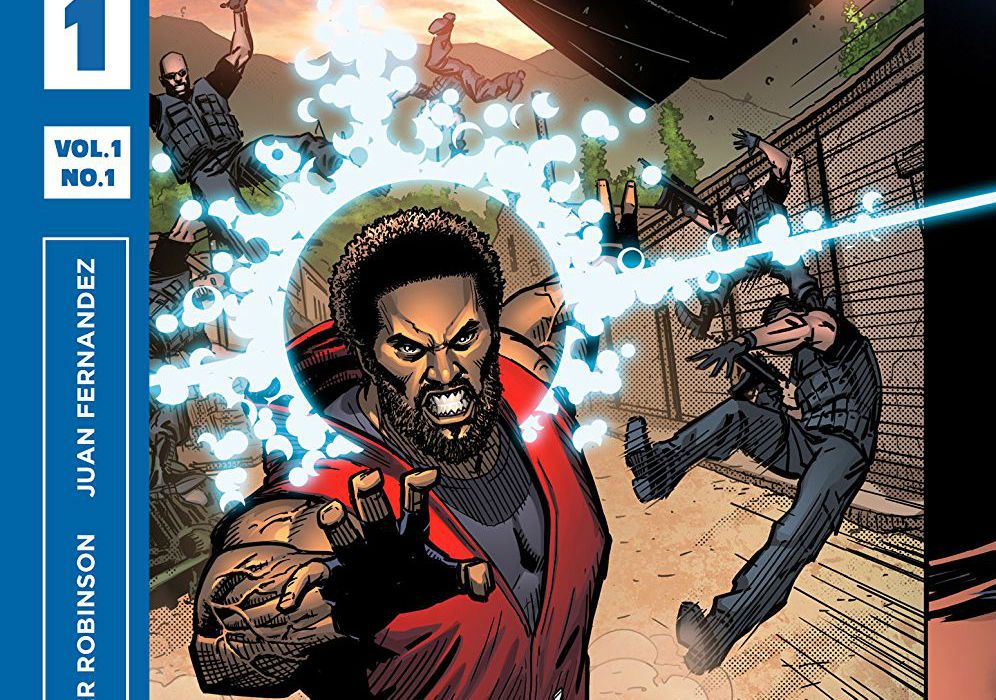 After months and months of teasing, impact is imminent as Lion Forge Comics launches it’s superhero universe, Catalyst Prime. Alongside it’s Free Comic Book Day One-Shot coming this Saturday, we have the first issue of the first ongoing, “Noble”. So does Catalyst Prime hit the ground running or does it sputter and peter out? Let’s look. 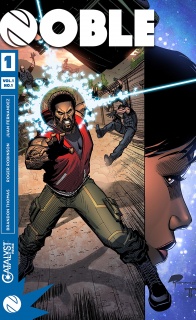 Catalyst Prime has begun! One year after “The Event,” missing astronaut David Powell has resurfaced! With dangerous new abilities and no memory of the man he once was. While desperately trying to regain his identity David quickly finds himself a man on the run from shadowy forces as well as his forgotten past. From writer Brandon Thomas (Horizon, Civil War II: Choosing Sides), artist Roger Robinson (Batman: Gotham Knights, Solo Avengers), and colorist Juan Fernandez.

Edited to add in letterer credit

One year has passed since “The Event” (Catalyst Prime’s FCBD offering details it further), when a group of astronauts try to stop the asteroid Icarus-2 from wiping this well-deserving planet off the face of the galaxy and the ramifications of that Event have reached far and wide. David Powell, one of the astronauts from that fateful venture, reappears with strange telekinetic abilities, no memory of who he is, and being hunted by a mysterious organization. And as the tagline says: “When you have the power to change things, but no memory of who you are, the only thing left to be in this world… is Noble.” So does the debut book of Catalyst Prime hit with great momentum?

I have to say, after reading this, the word that kept coming up for me is “basic”. I’m not saying that in a bad way at all. Brandon Thomas keeps things simple as “Noble #1” is a very basic introduction to the series, concept, David, his wife Astrid and providing some demonstration of David’s abilities. It isn’t a book that is a grand slam that I feel like my get slightly hampered with the day it was released. Now, I have read the Free Comic Book Day issue and I feel like reading that one first would have done this issue a little better, if only to give us a little more context to David before the Event. It’s not a mandatory reading order, but trying to think about this from the point of view of someone grabbing “Noble #1” cold, it just makes for a better flow.

“Noble #1” starts during the Event, as Astrid Allen-Powell watches in worry about her husband. It serves as an important book end for the eventual twist by issue’s end that I won’t spoil. The majority of the issue takes place in Argentina as we follow the amnesiac David as he’s on the run from a group of mercenaries. It’s here that pencil/inker Roger Robinson and colorist Juan Fernandez get to stretch their muscles a bit. Their style reminded me a bit of another indie superhero comic going on right now, Darick Robertson and Diego Rodriguez’s work on Valiant’s “Harbinger Renegade”. When in action mode, the art team provides a finely choreographed fight as we see David display some of his powers. The characters look, well for lack of better term, “beefy”. David and these mercenaries are well fit, but never feel over-muscled as some artists can go, to almost comical levels. It serves to provide a good sense of realism and fits well with the more grounded science feel that seems like Catalyst Prime is trying to cultivate, based on all the promo information we have.

Juan Fernandez’s color work does a good job giving a depiction of Argentina. Nice and sunny. There were two aspects that really stood out for me. The first is the use of shadow. This seems like a very small thing, but Fernandez pays more attention to shadow than I see in most superhero books, whether it’s someone bending down to pick someone, or how different sets of lighting will affect the shadows in a room. The second aspect was noticed during the fight David has with the mercenaries. As it goes, David regularly gets flashes of his son. The thing is, the first flashes are very grainy and distorted, along with the colors. As they continue they get more and more firm. It’s a nice touch to help sell a build up.

The lettering from Saida Temofonte is fine. It provides a nice moment at the beginning where some of the words a scientist is telling Astrid, showing that she is only half listening to finding out her husband was gone. It provides a nice emotional vulnerability. There was a moment further on where balloon placement felt very odd and I had to reread to make sure the conversation was going as intended.

One last thing, and this is about the overall package of this debut. I am glad that this book doesn’t seem to be “Catalyst Prime’s Superman” or “Catalyst Prime’s Batman”. Comparing it to the other superhero universe Valiant again, you can make the argument that “X-O” is Valiant’s Superman analogue. Here though, “Noble” feels very much its own thing. While this debut issue wasn’t a slam bam 10/10 book, what it did do was be very intriguing. I am very interested to see what is going to happen the further on as Catalyst Prime unfolds more.

Final Verdict: 6.8- An interesting debut that begins to show the potential Catalyst Prime has.