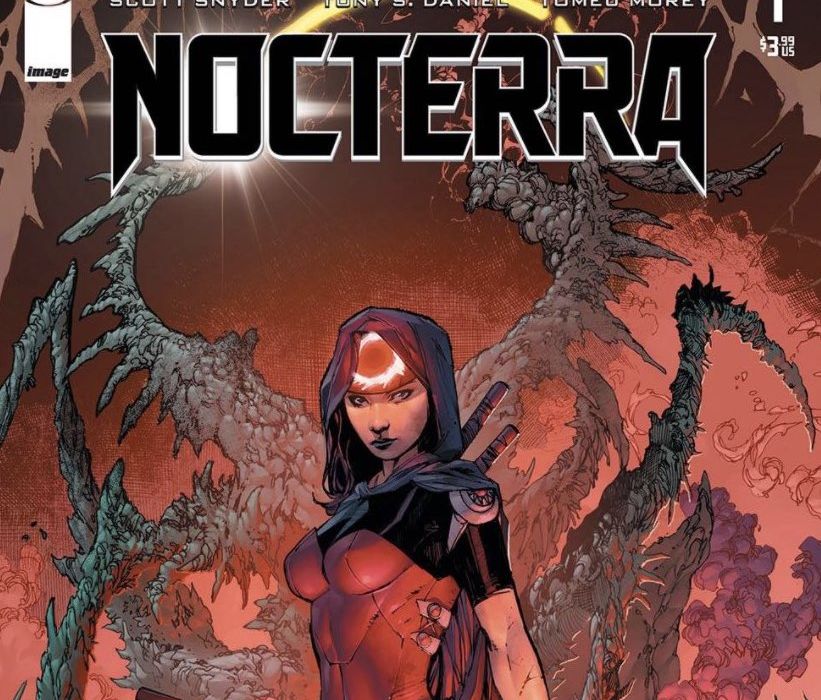 “Nocterra” #1 is Pitch Black meets Mad Max, with enough familiar film tropes to make fans of these stories feel right at home. What works on a screen doesn’t always work in a comic book, however. Warning: spoilers ahead. 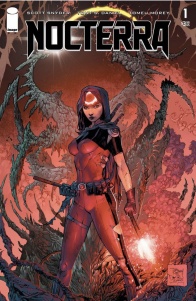 Cover by Tony S. Daniel
Written by Scott Snyder
Illustrated by Tony S. Daniel
Colored by Tomeu Morey
Lettered by DC Hopkins “FULL THROTTLE DARK,” Part One – Ten years after the world is plunged into an everlasting night that turns all living creatures into monstrous shades, the only way to survive is to stay close to artificial light. Enter Valentina “Val” Riggs, a skilled ferryman who transports people and goods along deadly unlit roads with her heavily illuminated eighteen wheeler.

“Nocterra” #1 introduces Val, a woman whose trucker skills are put to the test in a nightmarish landscape filled with light-averse monsters and some sci-fi intrigue. She has a family member to save, some personal trauma to resolve and some human cargo to deliver. While the concept is great, the execution is a plot-heavy narration dump on top of occasionally cluttered art, and the book strains under its own storytelling ambitions.

Snyder fills us in from the first page, and while the writing is up to his usual standard it’s just too much for a first issue to handle. This simultaneous storytelling is something that many comics creators have brought over from film, but they don’t often chop down the text to suit the medium. Voiceover in film is annoying to some, true, but we can watch and listen at the same time without a lot of strain because we’re engaging multiple senses at once. There are different ways to deliver this experience, too – in storytelling that’s additive and cohesive, or the absurdity and occasional humor of parallel narration that might not match what’s happening on the screen.

However reductive it may sound to some, we still process our sensory experience in comics through our eyeballs first and foremost, no matter how musical or evocative the work might be. There’s a strain here between text and art on the page, and we have to choose one at a time – scan the art, scan the dialogue or scan the narrative boxes. When the sequential action demands a quick pace to maintain tension, stopping to read too often means we risk losing the narrative thread and getting mired in a frustrating comics experience.

Snyder might be overwriting storytelling here to try and limit our eye drifting further down the page. Daniel’s panel structure and art march to a regular drumbeat. Narrative tension in a book like this often requires a somewhat linear read, while mood and dread can be maintained page to page through a cohesive color palette (among other things.) “Nocterra” is a straight-ahead action story for now, and the narration is likely meant to root us in the present and keep us focused on the information Snyder and Daniel want to hit before we go wandering. Still, if we have to stop too much to parse text that covers a significant portion of the book’s plot and Val’s backstory in otherwise brief moments of violence and high action, we lose that elusive tension and can get thrown out of the story.

Daniel’s work is hit or miss when it comes to consistent facial details. There are some punchy panels that matter in which Daniel’s clearly taken some time, and then there are a few moments where the art feels rushed, blurry or inconsistent. Some individual panels of Val don’t look like her at all, and the sunburn reveal looks like there’s liquid splashed on the man’s arm. The first several pages are probably the best in the book, with a good balance of Daniel’s more contained line, character detail, and balanced colors. Later on, the splash of Val’s “home base” has interesting architecture and a lovely rustic palette from Morey. However, Morey doesn’t add enough contrast in the initial action sequence between Val’s costume, the creatures, and the billowing pink and red clouds, so the pages quickly blend together – and with the narrative boxes also done in red, it’s hard on the eyeballs. Still, in a book that’s all about light Morey pays special attention to glowy details when they do matter, and “Nocterra” aims for a recognizable aesthetic that does come through.

Hopkins has a lot of work to do in this book, as noted above, and placement is pretty good. Daniel includes far too much background detail to support the scripted text, so there’s very little room for error. Hopkins includes some nice slashy sound effects that blend well with the slicker colors and bursts of glowing light, and there’s minimal flair on the balloon stroke so we can read and move on in short order. Similarly, the font’s subtly styled so it stays readable without too many flourishes or too few to make it stand out negatively.

Overall, “Nocterra” #1 is an extremely cluttered introduction to what could be a pretty cool trucker adventure story if we learn more about Val and crack the standard hardcore femme protagonist shell. Snyder does good work to introduce her as a child in a somewhat vulnerable state – though again, we get that through narration instead of action – there’s not quite enough here that makes her stand out amongst her peers.

Still, “Nocterra” #1 isn’t without intrigue. We’ve got a strange and compelling villain, a woman with some stakes, and a world full of gritty baddies. With some luck, subsequent issues won’t feature as much text so we can read at the pace the art demands.