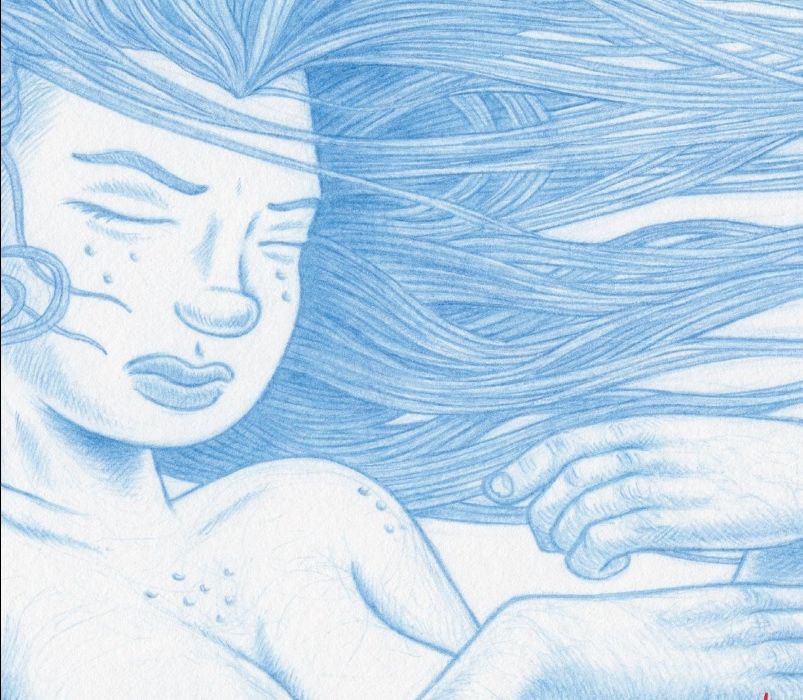 “Nod Away” from Fantagraphics is about as difficult to describe as it is immersive. Grounded in character development and slow burn storytelling, it’s more an evocation of a mood than a sci-fi epic, and it creeps up on you. 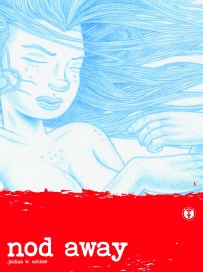 Nod Away is set on a near-future version of earth. A deep space transport has been developed to take a small crew to an earth-like, habitable planet in a nearby system in an attempt to begin colonization/repopulation. The internet is now telepathic and referred to as the “innernet.” When the hub is revealed to be a human child, Melody McCabe is hired to develop the new nexus on the styles to explore what consciousness could be, where it could possibly be located, and what function or point it might serve.

The internet is already bigger and more powerful than we know what to do with. And it’s not a stretch to imagine that someday, it will be integrated with our consciousness. In “Nod Away”, this future has arrived, but it hasn’t been evenly distributed. 60% of people are compatible with the “innernet”, a vast, telepathy-like network of minds. As for the rest – among them our hero Melody – it’s hard to say what the future has in store.

Her incompatibility notwithstanding, Melody is tasked with developing a new outpost of the innernet on an international space station. But when she arrives aboard the Integrity, the disappointments accumulate: there’s bureaucracy to navigate, the doors never work, and she’s constantly being hit on. It’s like a dorm atmosphere if your dorm somehow revolved around the clairvoyant abilities of a human child – the “hub” that Melody works with. As Melody explains later in the book, the novelty of the job quickly wears off, leaving a sense of isolation in its place.

Cotter does an upsettingly good job portraying a work atmosphere where something is being kept from you. Characters talk around topics, trail off, and allude to things Melody hasn’t heard of. It all conspires to create a low-key sense of dread as Melody tries to focus on her work. All the more disconcerting is a rumour that the head of the project, Dr. Serious, only hired Melody and her coworkers as eye candy. But if that’s the case, why does he seldom see them?

Nothing quite adds up, and then a disaster in the middle of the book throws everything into chaos. The questions looms: does anybody on this space station know what they’re dealing with?

Cotter’s art is hatched and cross-hatched and hatched some more, creating dense textures for the characters to leap out from. This attention to detail extends as far as the characterizations themselves, where the “acting” is wonderfully subtle – everybody’s tics and habits become familiar. And when you put the book down, it’s these characterizations you remember – from a very, very Southern TV host who delivers some exposition, to the upright but annoying Iota.

Melody herself moves from grouch to bored to skeptical to cautiously optimistic, and remains a sympathetic anchor throughout the story. She’s just a lady trying to get a job done, and in her posing and expressions she’s not glamorized at all.

This is a text-heavy comic, and it’s all hand-lettered, with speech bubbles often taking up more than half a panel. Far from annoying, the dialogue flows well, and the bubbles are nested neatly within the compositions. The interiors that peep out from behind the bubbles, meanwhile, have a retro-futuristic vibe – think ductwork and big tangles of cables.

The close confines of the station make for a sense of claustrophobia throughout the book, while a second story running parallel to Melody’s offers much wider vistas. Featuring a man roaming a wasteland in search of fuel, there are wretched landscapes and big skylines aplenty, and about as many unanswered questions.

The book veers into abstraction at times, with the introduction consisting of scattered words and blots of black. There’s something being said about consciousness, about thought, but it’s being spread thinly over the length of this decompressed story.

To that point, “Nod Away” is the first of seven planned volumes – a fact which makes the cliffhanger at the end of this volume easier to handle. Seven volumes also seems about right, given the scope of ideas, and the depth of characterization, that Cotter has developed so far. I don’t know the size of the audience that pines for slow, brooding, character-driven sci-fi, but when the book is this good, there have got to be admirers waiting in the wings. And so, while “Nod Away” offers an anxiety-provoking vision of the future, a future with more of this book in it can’t be so bad.