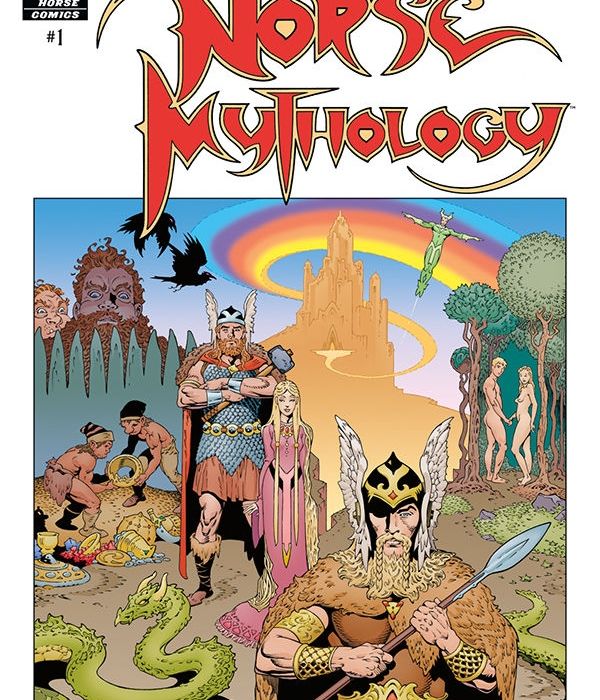 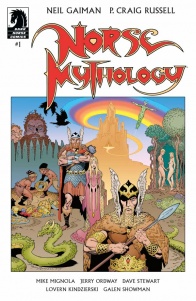 #1 New York Times bestselling author Neil Gaiman and Eisner Award-winning comics legend P. Craig Russell breathe new life into the ancient Norse stories by taking readers through the creation of the Nine Worlds to the epic origin and adventures of Thor, Odin, and Loki all the way to the end of life—Ragnarok.

Having previously written about deities in American Gods and The Sandman, Gaiman teams with Russell to finally bring readers to follow the northern gods in their own setting in this comic book adaptation of the hit novel!

“Norse Mythology” #1 is actually three comics in one, and while there’s something to be gained about reviewing this issue as one cohesive entity, each story in “Norse Mythology” #1 has its own aura, style, and diction. Because of that, consider this a three part review, with similarities and noteworthy connections between the stories noted at the end.

‘Yggdrasil and the Nine Worlds’

You might notice in the header that there are a lot of artists involved in this project, and that’s because each story has a different illustrator at the helm. In ‘Yggdrasil and the Nine worlds,’ the first story in “Norse Mythology” #1, Russel makes good use of a thin lined, detailed art style. Despite his attention to detail, each panel has a clear foreground, background, and subject. This feels and looks very much like an introduction to a wider story, which make sense. In total, while the mapping of the world tree Yggdrasil (as niche as it is) might be old news to Gaiman fans and fantasy heads, Russel’s interpretation of Norse cosmetology here feels clean, fresh, and uncluttered. The Nidhogg specifically looks sleek as hell, but that’s also due to colorist Lovern Kindzierski’s deft palette. The story here is minimal; but Gaiman’s ability to say a lot with few words goes a long way in making this story an airy read.

The second story in “Norse Mythology” #1 gives the reader the rundown on how Odin lost his eye, and the wisdom he gained in the process. The writing itself is breezy, and unlike the first story in “Norse Mythology” #1, has more of a narrative flow. Still, the story is simple and effective. As always, Mike Mignola’s art style is a thing to behold. It’s chunky, heavy, and full. Each panel looks like it could be a stand-alone art print, and almost has an etching like quality to it. Stewart applies color heavily, complimenting Mignola’s style. Sanguine reds and deep turquoises are the stand out colors. Mignola’s art, impressionistic yet bold, oozes with expression. He makes good use of light and dark too, and the shadows beneath Odin’s brimmed hat art especially iconic. This story may be the strongest of the three in “Norse Mythology” #1.

‘The Treasures of the Gods’

While the first two stories in “Norse Mythology” #1 serve as prologue, the last story, ‘The Treasure of the Gods,’ really kicks things off. Gaiman does a wonderful job showcasing the specific kind of humor that’s present in Norse mythology, namely the bombastic threats of violence, wild deals, and wacky scenarios that come from Loki and Thor’s cat and mouse games. The crux this time? One morning Thor’s wife Sif wakes up without any hair on her head, because Loki, being the trickster god, decided to Thanos snap it out of existence. We love a prankster, don’t we? Things escalate from there, and soon Loki is double dealing and gambling for more than he can give up. Jerry Ordway’s art has an old school charm to it, full of linework and classic comic character facial expressions. This story feels cozy, and is a warm read.

All together, the collection of stories in “Norse Mythology” #1 will appeal to collectors, seasoned fans, and newcomers alike. While it’s not groundbreaking or revelatory, “Norse Mythology” #1 feels like a homecoming, or victory lap for Gaiman, Mignola, and the medium itself. Each story has a distinct narration style. Note that the first story is from an omnipotent narrator point of view, as it’s discussing the creation of the world. The second story is a tighter but still omnipotent third person narrator, and the last story is a full-on mix of narration, character dialogue, and all the bells and whistles of contemporary comics storytelling. There’s a lot to interpret here, and if nothing else, “Norse Mythology” #1 is a warm reminder about how sequential art can compliment a story, even if its one we’ve heard a thousand times.

Final Verdict: 8.0. Neil Gaiman’s “Norse Mythology” treads familiar ground but never comes off as trite, and is instead charming, funny, and an altogether cozy read.