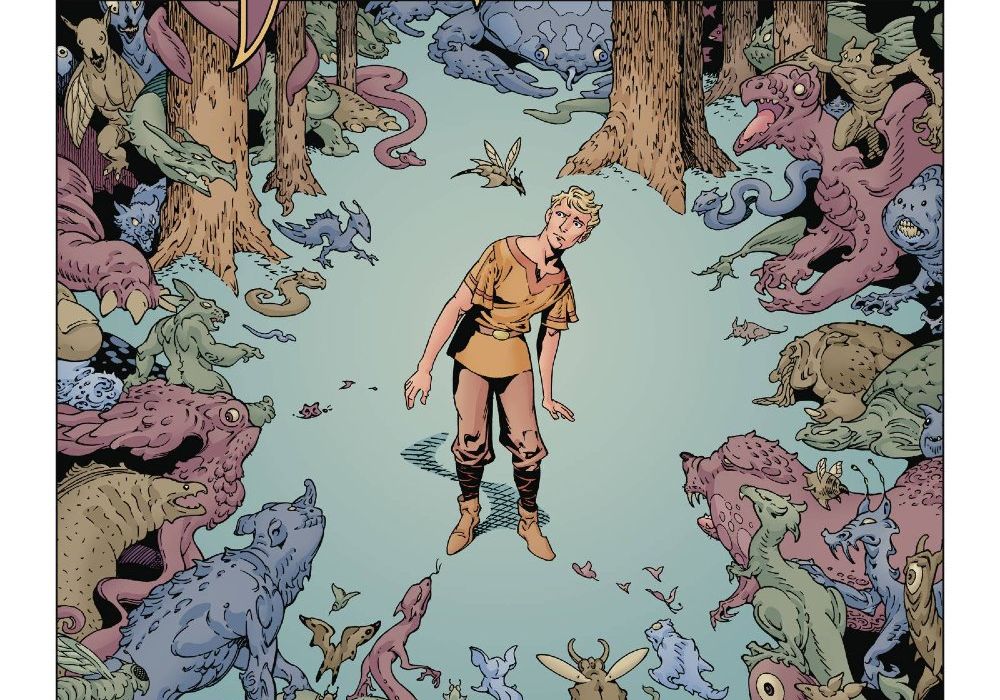 It’s time to check in on Thor and Loki to see how their latest adventure is going. No, not the ones in Marvel Comics, the ones from Norse mythology. In this case, Neil Gaiman and P. Craig Russell are bringing classic myths to the pages of comics with “Norse Mythology,” giving us a Thor and Loki story with less super heroism and more… trying to hurt snoring giants. 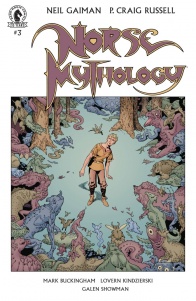 Thor and Loki stumble upon sleeping giant who takes them on a journey to the giant king who gives them a bizarre challenge to participate in.

Okay, be honest: who among us can say we didn’t have a mythology phase growing up? For me, I started with Greek mythology, then moved on to Norse, then Egyptian, then Native American. So I’m well acquainted with classic myths.

Well, it’s clear Neil Gaiman shares that interest, as he not only wrote a book on Norse mythology, but it’s also adapted to comic form by P. Craig Russell. In this issue, they adapt the first half of Thor and Loki’s journey to Utgard (a well-loved myth wherein the gods manage to get humbled in a competition while still coming out looking incredibly impressive).

Now, with any myth, there’s going to be different versions told and retold in different ways, so details will vary. What matters is the overall plot and character points, and “Norse Mythology II” manages to take us between them all smoothly. Of course, as this is a comic based on a book retelling Norse myths, I can’t exactly credit the writers for the story or characters (since they’re working off preexisting material) but I can credit how well they interpret it into comic form.

Rather than focusing on the gods, this issue starts by centering more around the human characters who play a role in the myth – primarily Thialfi, as it explains why he’s such a fast runner and how Loki tricked him into eating the bone marrow from one of Thor’s goats.

Of course, it does still put plenty of focus on the gods once they appear, primarily Thor. That’s because the myth this comic focuses on is one where his strength alone is not enough to achieve his goals, which is a refreshing change of pace. We get to see his frustration mount as the issue continues, made all the better by Mark Buckingham’s artwork.

The combination of narration and dialogue carries the story along nicely. When the characters talking can move the plot forward, such as Loki putting ideas in Thialfi’s head, Russell and Gaiman let it do just that. But in the scenes between, when characters are traveling or the images need a little elaboration, the narration keeps everything moving. Together, they create a nice pace that carries us through the story.

Plus, it manages to bring some of the best bits of humor from the original myth to life nicely, helped in no small part by the art. There’s a particularly great scene where Thor tries to wake a snoring giant by smashing his head with Mjolnir. Each time, the artwork emphasizes the strike more and more, while the dialogue where the giant asks if something like an acorn fell on his head adds humor to the lack of reaction. The final blow, which takes up a good third of the page, uses a massive “Boom” sound effect to great use as it echoes out from the mountains, nicely illustrating the force of the strike and making the giant’s lack of reaction all the better.

Which brings us to the artwork itself. Mark Buckingham’s art is well-suited for a tale about Norse deities and mythology, using a style that would be fitting as an illustration in a storybook. The designs are crisp, with a clear focus on the linework and outlines. It’s not always the most detailed, but everything has a strong outline to it that is made all the more clear by the colors.

The color work is by Lovern Kindzierski, who uses soft and often earthy tones to create a more grounded look. It’s not the brightest or the boldest, so it’s easy for the eyes to flow across the page. This adds an almost gentle look to it, which matches well with Buckingham’s style.

Now, there is some difficulty in telling a narration-driven story in comic form that shows up on occasion. When the story jumps from place to place, the art has to keep up, which can interrupt the visual flow. Fortunately, that is a very rare occurrence in “Norse Mythology II,” which takes its time to properly space out and flow through the major scenes. The only parts that feel “fast-forwarded” by the narration are minor details or travel scenes, so nothing is lost in the pacing.

It’s also worth noting that Thor and Loki are carefully designed to follow their mythological designs, rather than modern interpretations that use their Marvel counterparts as an influence. Thor is a redhead, as he should be, and Loki has pale skin and a darker outfit. Any similarities between the versions in “Norse Mythology II” and Marvel Comics come from their mythological roots, like the helmets they wear (Loki still sports horns on his while Thor’s has wings on the sides).

As for the other characters, they also feature solid designs. The comic uses styles more akin to what people would wear back then for the gods, humans, and giants alike, but each design has plentiful personality. The giant Skrymir, for instance, is given a design and outfit that emphasizes his size and “friendly giant” attitude, down to his impressive facial hair.

When it all comes down to it, “Norse Mythology II” is a comic adapting classic mythology and mythological characters, and it does so nicely. The dialogue is strong, the narrative flow carries us through the story, and the artwork is appropriate for the comic. Whether you’re a fan of Neil Gaiman’s storytelling prowess or Norse myths in general, you’ll enjoy seeing these new tellings of classic myths.

Final Verdict: 7.5 – A fun retelling of classic Norse myths, with expert storytellers handling the writing and an art team perfectly suited for the task.