Do you feel that isolation? That lingering, spiraling alienation when, after enduring global and personal calamities, the world still keeps proving that it’s conspiring against you rather than lifting you up to fly?

The timing of the second volume of “November,” subtitled “The Gun in the Puddle,” is eerily matched to our unique moment. As brilliant as the creative team of writer Matt Fraction, artist Elsa Charretier, letterer Kurt Ankeny, and colorist by Matt Hollingsworth is, they could not possibly have known some of the ways their fractured tale of women fighting back, cops abusing authority, and the suffocating thrall of a world on edge would resound in the summer of 2020.

But this second installment of the four-volume (originally three) noir graphic novella series hit curbside comic shops and digital platforms on June 3, 2020, briefly delayed by COVID-19 shutdowns. And it emerged blinking into a world that, when the first volume released with plaudits in late 2019, couldn’t have anticipated the precipice we sit on, or the fight for dawning change that we’d be in the midst of. 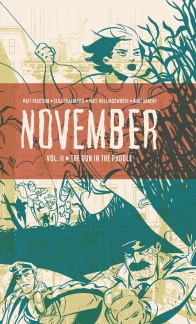 Written by Matt Fraction
Penciled & Inked by Elsa Charretier
Colored by Matt Hollingsworth
Lettered by Kurt Ankeny
One phone call for help and all hell breaks loose for three strangers connected by bad luck, a twist of fate, and a gun in a puddle of rain. In the middle of a dense criminal underworld, these strangers’ lives collide on one fateful and bloody night in this epic novelistic thriller. One night. One city. Three women. NOVEMBER.

Last year, our Edward Haynes reviewed the first act of “November: The Girl on the Roof,” catching its snapshot nature, its suggestive hints at a bigger bang of a backstory, and its chain-link fence motif, employed by the creators and designer Rian Hughes to dress the book in both rigid containment and the tease of freedom. I loved that first volume, especially for the explosive revelation of Elsa Charretier’s aesthetic range that, I would argue, puts her in a distinctive tier of artists. I was also left unfulfilled by a story just starting to crack open.

But the second volume gathers the piecemeal momentum of the first and fires the ensemble story toward a captivating convergence. (Though I’d lay bets that as true noir, this momentary unity will soon give way to more tangled fallouts.)

Recall volume 1 and pardon my vague summary, a wink to readers without giving away too much. “The Girl on the Roof’s” antihero, the strangely employed Dee, moves away from the center of the action of “The Gun in the Puddle,” but stays key to the mysterious chain of events. Instead, volume 2’s focus shifts to Emma-Rose, or “Em,” who we first see in a childhood flashback defiantly flying kites in a wide blue sky, a pitched visual and narrative contrast to the story’s tight and taut proceedings, and an evocative bookend to this volume.

Then, a content warning for police violence and brutality: we are up close with Em, thrown into the trunk of a car bound and gagged, following her abduction by the cops she called for help in volume 1 after finding the titular gun in a puddle. Em’s subsequent ordeals are brutal and troubling. (And maybe troubling to imagine what real life circumstances might have come with the incident that sparked the story, when Matt Fraction’s partner Kelly Sue DeConnick stumbled on such a castaway gun in the bushes outside their home

From there, I’ll spare the spoilers and just assure you that the wonderfully anti-clichéd trio of women we met in volume 1, Em, Dee, and dispatcher Kowalski, all get layers of texture as they leap deeper into the narrative’s vortex of trouble. Kowalski in particular, who gets called “Kay” by a grumpy supervisor, develops some intriguing dimensions in just a few pages told with remarkable economy. Em, Dee, and Kay, with scenes as terse as their initialed nicknames, flash their grit through a thicket of corruption and chaos.

On that note, while the subtle twists and mysterious turns of the non-linear plot leave little to unpack in this review, we can certainly make much ado about the artistry of “November,” the mechanics of Charretier, Fraction, Hollingsworth, Ankeny, and Hughes’ craft within their respective channels of the comic, combining for the noir impact of cool grace masking a trembling core.

Of course, sitting in the aesthetic background of “November” is a mood whose last, best encapsulation is probably Darwyn Cooke’s adaptations of Richard Stark’s “Parker” books. In true Cookean manner, those adaptations both capitalized upon and stripped down the pretenses of the postwar White male noir antihero, both glorying in its inky toughness and tongue-in-cheek cognizant of its tragic–or silly, depending on your point of view–futility, self-consciously high on its own supply of both Smith-Wesson and Smith-Corona. (If those allusions eluded you, don’t worry, you’re a better person for it.)

Lately, Fraction seems repeatedly interested in deconstructing and repackaging that mood in an era that rightfully questions the hell out of it. See everything from “Hawkeye” to the recent “Adventureman.” But to simultaneously subvert and capitalize on the noir alienated outsider, often White and male, requires that creators have a kind of double-proficiency, topping off the genre’s grace notes while escaping its doom of repetition.

Much pop art– and Cooke is a great example of this– gets great mileage from lifting off the ramp from pulp to noir and soaring with those visual poetics to question patriarchal authority, render a desperate survival ethos, and invoke the knotted web of the world stacked against you. To flip those poetics for their more authentic subject positions– women, queer, people of color– and to show their agency and fightback alongside the inevitably of the social beatdowns… all calls for a truckload of craft that passes as a sedan of beguiling simplicity.

Here’s where I point to the blessedness of Ankeny’s lettering, Hollingsworth’s colors, Hughes’ design, and for the love of God can we please talk about Elsa Charretier next-level accomplishment now?

Ankeny’s jitter and scribble skirts the thresholds of legibility to maximize a calligraphic subjectivity that can veer from pep talk to paranoia. At first read, I was reminded of Cooke’s lettering in “Parker,” but on closer comparison, Ankeny’s even more loose. It’s a chef’s kiss of lettering style.

Hollingsworth and Hughes accomplish similar, deceptively simple craft in their colors and design, tuning the temperature of the stark monochromatics and adorning the liberal semi-negative space to perfectly pace the suspenseful pitch.

And maybe my favorite thing about Matt Fraction now is that he seems to have mastered the tonal versatility to correspond with great artists, whether jokey and talky “Jimmy Olsen” collaborator Steve Lieber or, in this case, the iconic and cinematic Charretier.

Of all these contributions, though, it is Charretier’s art that feels to me like a breakthrough that elevates this book. Charretier has said this book is a chance for a departure from being pigeon-holed, to demonstrate her own range. If Darwyn represented a kind of pinnacle, Charretier proves with “November” that she is prepared to carry the ball much further down the field. What the deceptive simplicity belies is a fine control of rhythm through panel slicing and framing, a more dynamic gauge of the emotional reach of these cartooned performers, and a remarkable intuitive recognition of drawing environments– a silhouette of corn fields, a waffled crate of records, a rooftop cityscape– to tap our psyches of a world both grimily over-familiar and, in the “little vibrations between…fingers,” the sensation of a transcendent “time outside of time.”

Taken together, the creators accomplish a next chapter that leaves us stuttering for breath, still fenced off from kinship, but driven to find each other and driven mad by the gears of the big machine eating us up that we keep grinding against.