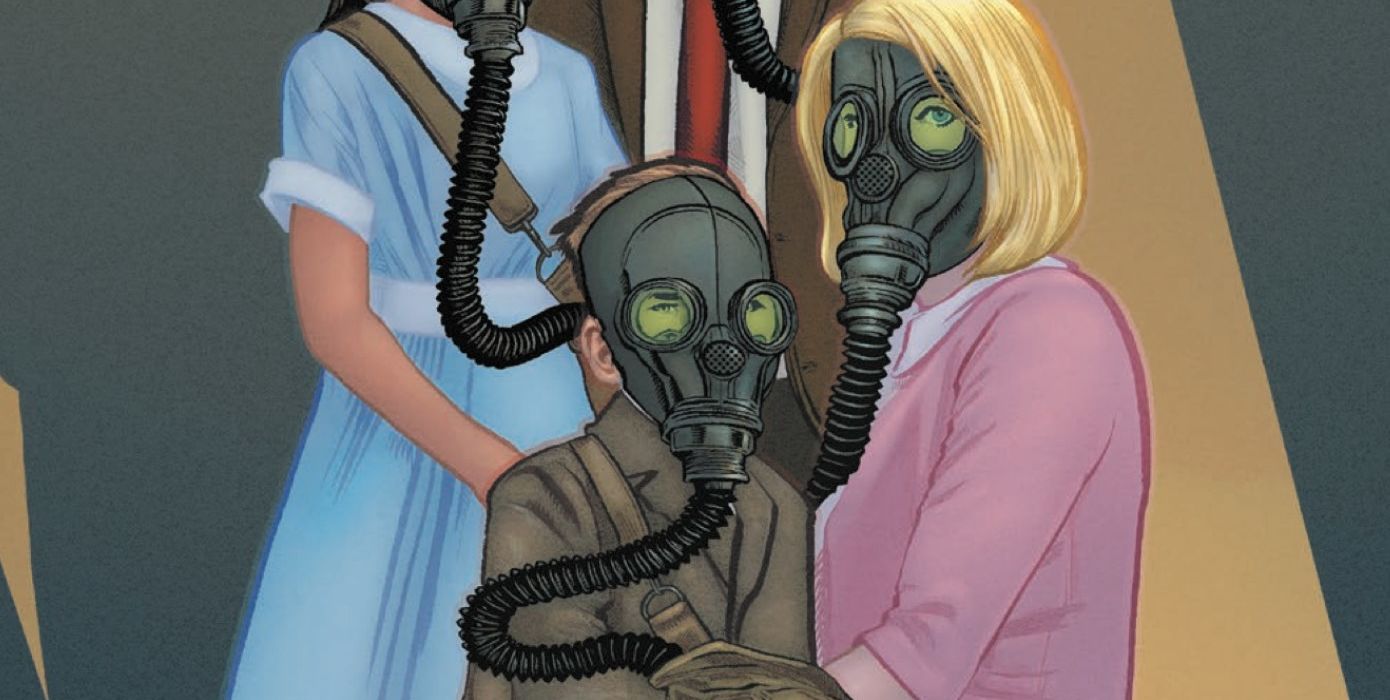 “Nuclear Family” #1 spoils the American Dream with some big booms, but it was likely rotten from the jump. Warning: spoilers ahead. 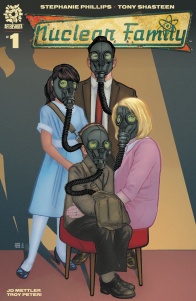 Cover by Tony Shasteen & J.D. Mettler
Written by Stephanie Phillips
Illustrated by Tony Shasteen
Colored by J.D. Mettler
Lettered by Troy Peteri America, 1957. Elvis dominates the airwaves and apple pie is served after every meal. But, with the dark cloud of nuclear holocaust looming, Korean War vet Tim McClean’s major concern is taking care of his family in the atomic age. When the first bomb does drop on an unexpecting Midwest city, Tim and his family find themselves plunged into a strange new world, where what’s left of the United States has gone underground while continuing to wage war on Russia with unthinkable tactics.

Based on “Breakfast at Twilight” by Philip K. Dick, “Nuclear Family” #1 examines the life of radio operator Tim McClean, whose used-car salesman job and small family squabbles are about to be given a whole heck of a lot of perspective. Phillips scripts a reasonably tight first issue and includes good character details for Tim, Dan the sleazy coworker and Tim’s family members. We have a set routine and a flavor of normalcy that’s quickly shattered by actual bombs, and the story is going to get weird. Fast.

Dick’s original short story is decidedly more experimental than this adaptation (so far,) but setting a linear baseline is a smart move in a comic. It’s possible to dump everyone into a post-apocalyptic landscape and walk the story back, but Phillips’s choice to begin with the edifice and tear it down gives us the character work we need to invest in Tim. We’re treated to Midwestern post-war idyll before everything gets wiped off the map, and Phillips takes some time to show us that Tim’s not quite at ease. We learn he’s a war veteran through Dan’s less-than-moral sales pitch to a prospective car buyer, and we see the basement cluttered with radios as a post-war hobby that could have become an obsession.

Shasteen puts in good work to get at that iconic mid-century aesthetic, and is most successful in the montage of Tim driving home. The trees are autumnal and Mettler smears them with perfect foliage hues, while Shasteen plays with some inky black scribbles and odd textures on the suburban asphalt. Shasteen also has the challenge of drawing not one, but several, cars that feature in the first third of the comic, and Tim drives the perfect, archetypal family man vehicle home to see his family.

What’s less successful is the odd switch Shasteen and Mettler make occasionally between a defined black line and a murkier beige or grey. “Nuclear Family” has a dreamy, magazine-ad feel to it but there’s awkward blur, especially in medium or long panels, that pushes the unreal balance too far into artificial territory. Shasteen’s page-turn match panels of the satellite with the used-car lot sign features a ton of great detail, but that detail soon gets lost as humans feature in the sequential action. It’s a tough thing to critique because there’s no neat solution, but a few panels just don’t work. A thick black outline on Dan’s hand holding the cigarette would feel too chunky, but it’s also strange to see the cigarette blur into the background while his fingers are defined. Earlier, Dan’s chin is outlined in black to stand out against his neck as he explains his sales tactics to a dubious Tim, but this calls too much attention to the single line. The proportions are also slightly off between Dan’s head and his hands in the next panel.

Still, some of this collage effect works well. During the driving montage, the suburban streets feel cobbled together and there’s an ominous tone in the sunset as if it’s too intense for the day. Mettler draws these colors through the blasted landscape we see later through Tim’s eyes, and the slight surreal edge is a nice homage to Dick’s work and suitable for the story beat. Mettler also pumps up the palette with the explosions throughout Tim’s neighborhood, which almost look like lava bubbling up out of the ground.

Peteri’s lettering is crisp and neat, with a wide font and a thick, irregular stroke on the balloons. The sound effects are placed well, but they feel a bit too artificial for the book’s aesthetic. Again, we’d be hard-pressed to determine what would be an effective alternative. Integrating them in the panels wouldn’t work for this genre of storytelling, and anything more irregular would fight with Shasteen’s work on the page. Some of this could be remedied in the font choice, as the siren wail and the clicking of the radio feel too modern to match perfectly. Again, this could be intentional given where the story’s headed, but they do stand out against the carefully crafted backdrop in this first issue.

Overall, the creative team puts in good work that prepares us for the total tilt “Nuclear Family” #1 takes at the end of the issue. Even at the beginning there’s something amiss, and it’s not just Cold-War politics: the sun’s too bright, the people are too jovial and the atmosphere is just too perfect. Phillips adapts the story to the medium with good hooks and pacing, Shasteen crafts a surreal visual narrative, Mettler gives it that almost sickly sheen, and Peteri keeps everything moving along when there’s more than a bit of dialogue to get through. Mid-century sci-fi fans should get their hands on this one, because it’s got good pulp roots and enough craft present to promise a fun experience in subsequent issues.

Final Verdict: 8/10 – “Nuclear Family” #1 is a clever short-story adaptation that sets up good tension, mystery and even a bit of pathos to keep us hooked for the next issue.