The Movement is here, and its motivation is clear. In “Occupy Avengers”, Walker and Pacheco set out to empower to the powerless. 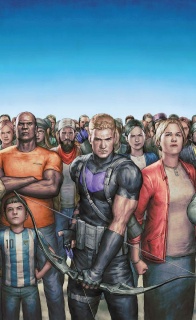 Super heroes – they’re a privileged class. Doing what they want, when they want and suffering no consequences. They have no regard for the ordinary people who are left behind to suffer in their wake. Who will stand up for the little guy? There is a man. If you can find him, and if he believes in your story, he and his friends will put things right. Some call them outlaws, rebels, Robin Hoods. To others, they are heroes. No powers to speak of – just skills, smarts and a burning drive to do the right thing. His name is Hawkeye. Occupy Avengers: It’s time to “Take Back Justice”!

Comic books often takes months, or even years to go from conception to completion. Ideas are bounced back and forth between writers, artists and editors, and often , as a result, books with a message can end up feeling a little out of touch or dated. “Occupy Avengers” honestly couldn’t feel like a more timely book if it tried. With the recent resurgence on social media of the debate about whether or not comic books should be escapism or political commentary, Marvel seem to have planted their flag firmly in the latter category. “Occupy” is a book about humanity, about taking a stand, and about using whatever powers you have (super, or otherwise) to make a difference.

In the wake of one of the many headline grabbing deaths of “Civil War II”, Clint Barton, Avenger and real-life Hulk-Buster, has taken a leave of absence from New York to travel the country and get his head together. On his way he seems to have returned to the ‘Hawkguy’ we all know and love, using his not-quite-super skillset to help the needy and overlooked in society. “Occupy” catches up with him in Santa Rosa, New Mexico, at the site of a reservation blighted by a contaminated water supply and crippling poverty. Clint wants to get in, help, and get out, but he’s ambushed by the local Sheriff and her deputy, Red Wolf. Knowing the purple Avenger’s propensity for violence, the Sheriff is less than convinced that he’ll be good for the town, but his earnestness and tenacity soon set him on a path straight for the heart of the problem, and it seems like he might be the perfect person to solve it.

Walker’s script is unashamedly political. Almost harkening back to the golden era of comic books when Superman’s enemies would be corrupt mine owners and shady politicians, “Occupy” is a book with a very clear, very modern message. Walker is aiming to deliver a big action, superhero book, but at the same time downsize the issues from cosmic level threats to real-world, relatable conflicts that might actually empower the reader. It’s a big ask, but his first issue definitely treads the line between entertainment and education in a way that still feels more like a Saturday morning cartoon than an after school special. While the discussion of political and social machinations takes centre stage, there’s more than enough action and adventure to keep the issue clipping along at an agreeable pace.

The narrative of “Occupy is framed with Clint’s rediscovery of what it means to be a ‘hero’ as he’s lauded by the general public for killing one of his closest friends. The choice to go with some pretty hands-on narration allows for an insightful and pithy monologue that swings between dissecting the action at hand and waxing more philosophically about how to best use the skills you have to help the world around you. Some of this issue does retread the well-worn ideas that Matt Fraction worked over in his run on “Hawkeye” (namely ‘how did a guy with a bow and arrow ever manage to get onto the Avengers squad in the first place?’ ‘Why doesn’t Clint just use guns?’ ‘How do you know you’re not doing more harm than good?’) but these discussions are pretty central to the character of Hawkeye, and Walker has confirmed that each issue of “Occupy” is to be narrated by a different hero, so there are plenty more viewpoints still to come.

Initially, “Occupy” was going to be drawn by Marvel powerhouse Gabriel Hernandez Walta, but his duties on “Vision” overran and Pacheco stepped in last minute to cover. Personally, I’d have loved to have seen Walta’s understated, nuanced take on Clint’s almost existential crisis in the early pages of this book, but Pacheco definitely does a solid enough job on this issue. His face work is a little stilted at times, and some of the more conversationally heavy pages feel a little by-the-numbers in terms of panelling, but once we get into the action the art really finds its footing.

There’s a beautiful splash panel of Clint, careening away from a group of menacing, machine-gun-wielding mercs that feels so barely held together that it’s classic Hawkeye. Pacheco’s action is streamlined and focussed, running a great parallel to the more esoteric elements of Walker’s script so that this issue never feels too bogged down in ‘issues’ to be an enjoyable romp. And, perhaps due to the ‘non-super’ nature of the heroes in this issue, all the violence feels surprisingly visceral. When Clint puts an arrow through a limb (which he does, a lot, in this issue) you really feel it. Pacheco doesn’t shy away from the visual consequences of violence, which feels fitting in a book designed to discuss the real-world responsibilities of heroism and inaction.

“Occupy” feels like a reminder of the political power of comic books. Both in its text, which deals with overlooked real world issues, and in its subtext, that not all heroes have to have superpowers, there’s a level of activism that feels as much a call to arms as it is a casual read. Walker promises more of the same as the series goes on, and in a world that needs heroes now more than ever it’s great to see Marvel stepping up to the plate and providing some.

Final Verdict: 7.7 – Proof that politics doesn’t have to be boring, it’s great to see heroes standing for something.