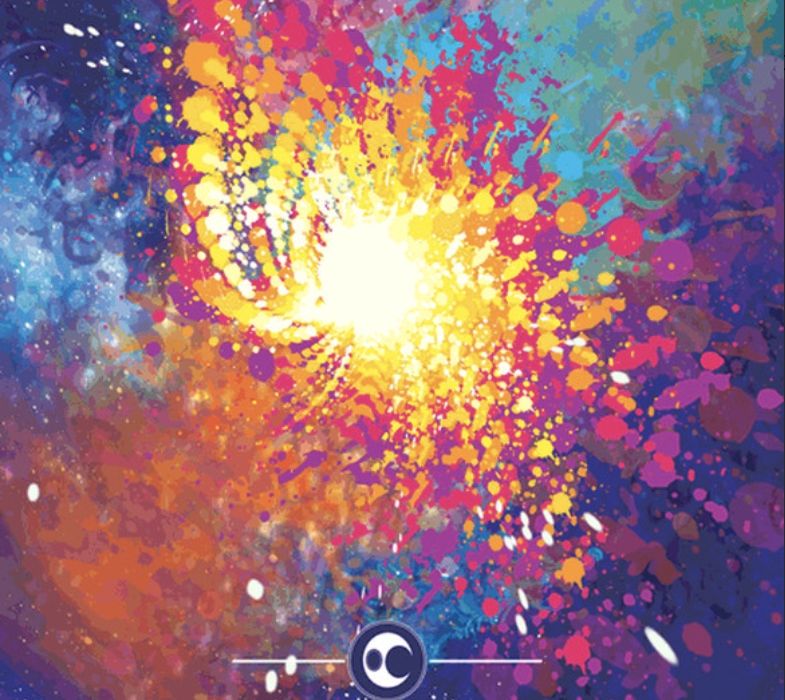 If I had a dollar for every “ODY-C” solicit or review that uses the term “gender-bending,” we’d all be millionaires. Warning: spoilers ahead. Obviously. 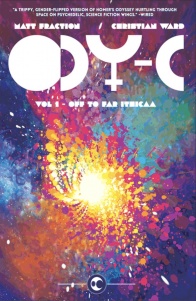 Cover by
Written by Matt Fraction
Illustrated by Christian Ward
Flatted by Dee Cunniffe
Lettered by Chris Eliopoulos An epic 26 centuries in the making: In the aftermath of a galactic war a hundred years long, Odyssia the Clever Champion and her compatriots begin their longest, strangest trip yet: the one home. A gender-bent eye-popping psychedelic science fiction odyssey begins HERE, by MATT FRACTION (CASANOVA, SEX CRIMINALS, SATELLITE SAM) and CHRISTIAN WARD (INFINITE VACATION, OLYMPUS).

Revisiting “ODY-C” proves to be the same frustrating and gratifying experience it was the first time. Ward’s dizzying art and Fraction’s meandering prose blur together to create moments of clarity that’re quickly swept away in a riot of color and navel-gazing that feels intentionally self-indulgent. So, too, is the original matter, so can we really denigrate a comic tribute?

No, but neither do we have to give it a pass.

Ten years’ deep into a war, Odyssia and her compatriots are victorious and set off for home and normalcy once more. Punished by a pissed-off Poseidon for neglecting to mention her in her sacrifice to the gods, Odyssia and her crew are swept along on trippy, intergalactic adventures as they struggle to reach Ithacaa: home, and home to a big ol’ secret. See, Odyssia and Penelope have a son. And seeing as how Zeus got pissed and killed all the men awhile back, that’s a big no-no.

Gender-swapping a big epic tale isn’t a one-for-one deal, and Fraction and Ward do a good job of integrating plenty of new ideas, lots of snark and a good dose of modern context to make “ODY-C” relevant and crisp in execution. Homeric musings blend well with sharp witticisms and acerbic endnotes in Fraction’s dialogue, and Ward runs riot with body types, gender expression and a raw physical delight that we don’t often see in this medium – at least not from major publishers. The gods are still jerks, Odyssia is still complex, hot-headed and seemingly at the mercy of her own clever mind, and the world remains inexplicable, bizarre and a bit overwhelming.

Ward’s art is divisive, because it’s at once gorgeous and challenging. There’s very little cohesion in terms of panel structure from page to page. Layouts are designed singularly to suit the moment, only to whisk us away into a dizzying splash or an oddly traditional, blood-soaked action scene. The riot on the page is fun and lends itself to poring over, but in terms of moving the story along and coalescing into a refined product the art doesn’t always do the job. A little more cohesion would be nice, especially as we pick through Fraction’s narration. The captions require a good deal of attention, and that attention is time spent finding the written thread to the detriment of the art. Bardic tradition and poetic complexity exist to create that synaesthetic blend of visual, musical and verbal in the reader or the listener – when we have the ability to use many modes at once, as in comics, it’s necessary to pare one back. Whether it should be the art, given Ward’s talents, or the narration, given Fraction’s, is hard to say. The imbalance remains, however, and it’s why “ODY-C” stumbles more than once in its plot thrust. Still, the beauty remains. Luscious bodies, rich landscapes of bloody pulsing colors, impressionistic bursts of light and texture abound, and throughout it all rides the ODY-C, a little bright curl of life and strangeness awash in a sea of trippy space stuff.

Eliopoulos’s choice to go with capitalization does the book a disservice. It’s easy to see why – it adds to the epic flavor, and all that, and makes for some good dialogue box contrasts – but there’s something about the font that makes it hard to read. It’s less accessible and a good deal colder than it’s intended to be, and that eye strain goes a long way toward diminishing the appeal of intensely complex art. Good lettering should be seamless, and this lettering is not. It feels tacked on in a way that, to be fair, is unavoidable in terms of placement (have you seen these pages?) but in terms of style, a lot could’ve been done to gentle the eyeball experience.

As someone intimately familiar with gender fluidity in my own life, the visual stimulation is more interesting to me than the gender constructs in this book. While it’s refreshing to see the Olympians as horrible regardless of their gender, the rest of it doesn’t do much for me. That may seem flip, but putting the Helenic analogue in a gimp suit to make a point, or to be perverse by showing how female soldiers can kill other female soldiers just as well as some dudes, is a bit of a miss. Likewise, I’m too familiar with the special brutality of women to buy that kind of one-for-one swap as revelatory. Fraction and Ward don’t intend it to be – they’re telling a story, here – but there’s a self-awareness and nod to current social mores that becomes irritating over time, even as Odyssia morphs into a character worthy of an explosive, strange epic. There’s too much here that’s on the nose to get me riled up in the right way, and too much structure to allow for a certain kind of gnosis I seek in these fringe tales.

Overall, “ODY-C” is still good. It’s still entertaining, it’s still epic and it’s still gorgeous to look at and experience. It’s also still obtuse, still pandering and still a little too flip to carry off what it’s trying to do, at least at the beginning. Persevere, as I did, because the whole is more than the sum of its parts, but this first volume almost loses its way.