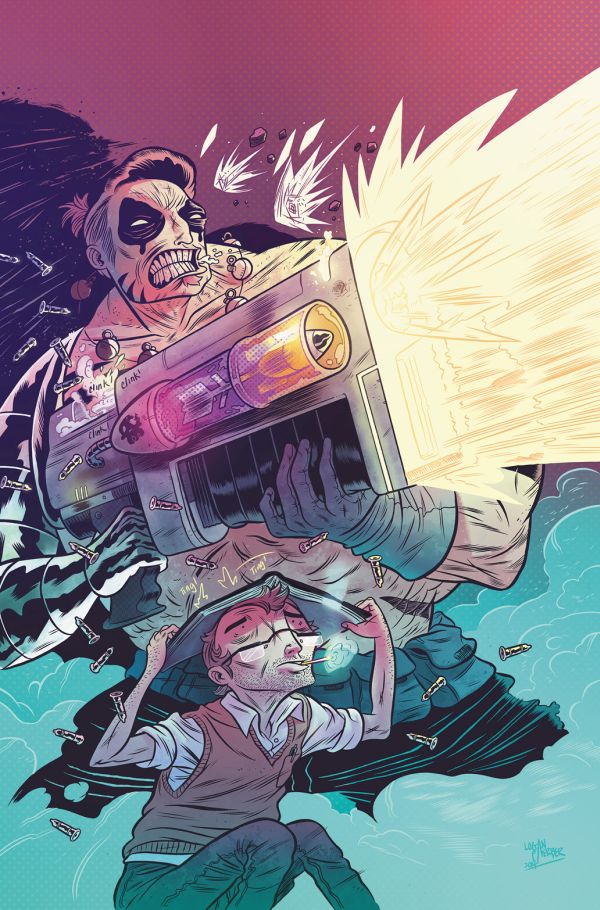 Say Anything’s Max Bemis returns to his youth alongside Logan Faerber on “Oh, Killstrike”, a heartfelt throwback to 90’s antiheroes. Find out if this comic has anything to say in our spoiler-free review below. 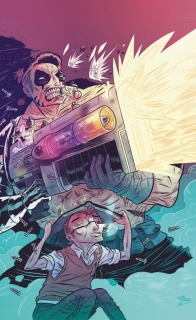 What’s to Love: Say Anything frontman Max Bemis writes a love letter to 1990s superhero comics in this tongue-in-cheek homage to the era, featuring the art stylings of Logan Faerber—reminiscent of works by Chip Zdarsky and Jeff Lemire. Much like Polarity, Oh, Killstrike is very personal to Bemis: It’s about a new dad who loves comics from his youth. Part twisted buddy comedy, part profound coming-of-age story, we could not stop smiling when reading Oh, Killstrike.
What It Is: Jared, a new father, fears parenthood. An old comics fan, he turns to them for comfort. But when he unwittingly lets loose his favorite character, Killstrike—a single-minded, vengeance-loving anti-hero—onto the world, Jared must find a way to send him back before he harms all the people he loves the most. But before that happens, Killstrike leads Jared on a quest of self-discovery to make him realize the kid who loved this character is not the man he has become.

Nostaliga is a powerful force in comic books. Right now, Marvel and DC are piloting their way through tow major crossovers with tie-ins that are built on nostalgia. Despite its claims to be going in new directions, Archie Comics is capitalizing on the wacky success of “Archie Meets The Punisher” twenty years later with their Predator and Sharknado miniseries. Max Bemis and Logan Faerber recognize the power of nostalgia, whether it be a company’s marketing strategy or an old fan picking up a dusty cover of “Starman.” And the duo utilize that power to lethal effect in “Oh, Killstrike” #1.

“Oh, Killstrike” centers around Jared, a new dad who finds out that his old Killstrike comic, one of the worst 90’s antiheroes of all time, is worth big bucks on the collectible market. After he goes to his parents’ home to find the copy, he accientally summons Killstrike (a mash-up of overeating wrong with Cable, Deathstroke, Wolverine, Deadpool, and every other awful 90’s vigilante) into the real world. Like the similar episode of Gravity Falls, “Fight Fighters”, “Oh, Killstrike” is less about the violent heroes and more about the insecurities that come from people who fall back on those archetypes. In “Fight Fighters”, Dipper summoned a Street Fighter II character to save him from a bully. In “Oh, Killstrike”, the reasons for Killstrike’s appearance are less clear. Jared has a wife and child, as well as a difficult relationship with his father. The challenge, then, comes in balancing his new life as an adult with the ten-foot tall armed maniac who’s shown up to your house at 4AM and wants to take you out for vengeance.

Some throwback comics get lost in the tropes they’re ostensibly meant to make fun of, but “Oh, Killstrike” manages to balance the line between 90’s cheese and some heartfelt sincerity. Faerber’s art is radically different from the excessive aesthetic that Killstrike was born in, but also exhibits an abstract clownishness that plays to the situation’s humor. Despite Jared’s status as a “real adult”, he still zips around the room with swoosh markings (is there an official name for that?) and can summon visual aid props at a whim. Whether he’ll admit it or not, he’s as much of a cartoon as Killstrike, though his attitude is more juvenile rather than Killstrike’s violent immaturity. And when Killstrike appears, muscles bursting through a comic book, his stature makes him easily distinct from the world he’s found himself in. As such, the book finds itself focusing on two characters who don’t really belong. One, because he’s not ready to accept the seriousness that comes with being an adult, the other because he has a dozen guns sticking out of his pockets.

That said, it’s not always clear at what level we’re meant to take Jared’s attitude. On one hand, the overtly indulgent primer on how comic books work seems like it’s in place for Say Anything fans who stumble onto this book because of Bemis’s name. And yet, it feels like a writer giddily showing off his knowledge of comic history. It’s interesting to see exactly where Bemis ends and Jared begins, as Bemis has noted in interviews that the series came from his anxieties in becoming a father. The line between fan and creator is always one present, even more so when that creator is a celebrity. The trick for Bemis and Faerber as this mini-series continues is to find the balance between telling a story about immaturity and telling one about how much they love comics. One story is compelling, the other’s been done far too much.

Final Verdict: 7.2 – “Oh, Killstrike!” is a smart look at nostalgia that just barely navigates the line between smart story and fanboy tribute. With smart quirky characters and some really funny visual gags from Faerber, “Oh, Killstrike” looks like it’ll develop into a promising miniseries.