Bemis’ and Faerber’s silly but salient meta mini-series dies like it lived: laugh-out-loud funny and lampooning the medium that spawned it till the very end. 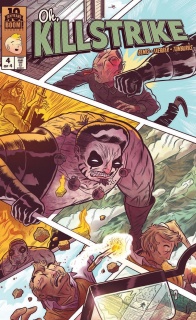 Jared and Killstrike face off in an epic showdown, and Jared must make a life-changing choice.

Comics are, as a rule, supposed to be pretty good fun. But rarely are you going to come across a comic that is as packed with humour at every level as “Oh, Killstrike.” From visual puns and wordplay to meta-textual references and subtle nods to other properties, to literary references that poke fun at overused tropes that litter the comic-book landscape. Bemis and Faerber have put together a truly terrific romp that manages to balance laugh after laugh with a solid story that both entertains and asks the reader to re-evaluate what they look for in a comic book. Safe to say, I think they’ve done a pretty good job.

The main storyline of “Oh, Killstrike” is both relatively straightforward and more than a little surreal. Jared Holliweather, a recent and reticent father and relentless comic-book nerd, is shocked when Killstrike, one of his favourite childhood comic-book characters, pulls himself from the pages of an old back issue and into the real world. Jared has to team up with the hyper-muscled killing machine on a quest to find a way back to his own dimension (translated to Killstrike as a mission of blood-curdling vengeance.) But Jared soon finds that Killstrike, while simple, super-disproportioned, and single-minded to a worrying degree, may be the key to helping Jared discover what it means to be a more well rounded real-life person.

In this final issue of Killstrike’s epic saga (and Jared’s epic inconvenience) Bemis brings the story to a close with serious stylistic panache. “Oh, Killstrike”‘s main narrative plus point has always been Bemis’ strong, satirical tone, and in issue four, he parodies enough nerd-standard tropes and clichés to make Brian Lee O’Malley jealous. But, at the same time, Bemis is so careful in how he frames these references that they stay smart and self-aware at all times. Jared, as the snarky, self-conscious leading man spends just as much time pointing out the absurdities of his comic-bookish transformation as he does rising to the challenge, and his pithy sarcasm counterbalances Killstrike’s hypermasculine 90’s naivety perfectly. As Jared comes to terms with his life, his relationship with his father, and what the future may hold for him (otherwise known as third act revelations) he notes that, “For the first time, it doesn’t feel like a complete cliche.” And he’s right. Bemis’ writing is irreverent and light enough that it never feels like his lambasting of the various complexities of nerd culture are too serious, but it’s still heartfelt and warm enough that his character-driven plot-points carry some real weight.

And Faerber’s art adds exactly the correct balance of funny-pages levity and graphic novel emotiveness to Jared and Killstrike’s tale. From the first issue his simple but touching style felt perfect for the story, and in this issue he proves yet again why he works so well with a narrative that both centers around and openly mocks the 90’s, many-pouched super-hero cliché. Faerber has a highly comical style that works best when he’s evoking movement and expression. Issue #4’s crescendo is a mystical mish-mash of intentionally OTT violence that allows for Faerber to put his foot on the gas and really go wild with all of Killstrike’s hitherto unseen physical potential. What’s more, Faerber peppers even this densely packed physical exchange with more sight gags than you’d have thought possible; little touches here and there that help elevate this book for me from good to great.

I’d also be totally remiss if I didn’t give a special mention to colourist Juan Manuel Tumburus, who’s vibrant and varied palette ensures that every panel of this issue looks like a distinct and deliberate piece of art. The depth and contrast of the colours he uses forces the action up and off the page, and the specificity with which he selects his colours for each different section really helps isolate the different elements of this issue, whether it’s the deep purple of inter-dimensional magic, the blacks, browns, and khakis of Jared’s military transformation, or the brillian sunburst reds, yellows, and oranges of Killstrike’s future-tech lazers.

Each issue of “Oh, Killstrike” offers a different opinion on what the job of a comic book is supposed to be. Initially we see comics represented as collectable items, valued for their physical rarity over their actual content, but as the series continued we get glimpses of comics as a means of communication and unification, otherwise known as comic-con, and comics as a commodity, as opined by “AC Comic’s” Editor in Chief. Throughout the story, Jared views comics differently, depending on the social and political weight they carry, prizing limited run indie books over mass market pulp. However, it wasn’t until the final issue that he remembers what he used to know as a child: that comics are also supposed to be fun. And “Oh, Killstrike” #4 is exactly that. That Bemis and Faerber manage to encapsulate all of this social commentary and multi layered humour while still producing a book that romps along and drags the reader with it is a true testament to their both their storytelling skills and their nerdy levels of passion.

Final Verdict: 8.5 – This issue is a glorious and satisfying conclusion to a little gem of a mini-series. Every comics fan should find something to love here.