Some characters in comics have so much exposure, have become so ingrained in fandom’s consciousness as a presence (rather than an individual) that it becomes harder to tell stories that feel truly unique or that move motivations and development further. Harley Quinn may be this generation’s biggest new example of that, with a seemingly superhero endurance, not unlike her own character in comics. And perhaps because of that, the success of Tieri, Miranda and team on this issue is reason for celebration. 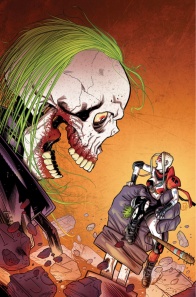 After liberating New York City from her now-feral Gang of Harleys, poor Harley wants nothing more than to slip back into retirement in her coastal (and heavily guarded) paradise. But the Laughing Boys Gang has another idea-they’ll follow her to the ends of the Earth, to drag her back to their leader! It can’t actually be…him! Right?! He couldn’t possibly still be alive, could he? After all…Harley killed him herself with her bare hands! Should she turn to President Power Girl for help? Or flee to the 51st state, Atlantis? Step into an insane vision of a future DC Universe we all better hope we don’t live to see!

“Old Lady Harley” loses no time on its opening pages to define the style and ambition of what it is going for, which is very much aligned with Harley’s self-awareness of comic tropes, influences and styles, down to the name of this limited series. After all, it is no secret that ‘Old Man Logan’ (the original story arc by Millar and McNiven) apparently played to the same vein of apocalyptic future run amok; the trick up on “Old Lady Harley” sleeve is how much fun it pokes at that pre-conceived notion.

Before going too far into the plot itself, merit should be given to Miranda on the myriad of design choices he executes on this debut issue. The artist certainly pulls from other medias and vehicles – pay close attention, and readers will catch references to Mad Max, Worms, and even other DC comics – but he does so on an obvious way at first, just to flip their visuals around later. Maybe the best inclusion on this regard comes from a squid gang (yes, really) at the very beginning of the story: it feels so surreal and out of place, and yet so integrated with the madness these characters are going through, that it becomes a highlight of the entire package.

Miranda also manages to keep character and world consistency in check. The story focuses essentially on two characters – Harley and Red Tool – who rightfully get the most attention in terms of body language and facial expression. Both of them, especially the titular lead, show a great deal of depth on how they react to the world around them and how these times have aged them in not the best possible way. Other ancillary visual components, such as gang members paraphernalia, creature design, desert landscapes, all mash together into a coherent whole. This very much feels like a lived-in world, one that will outlast the characters the readers are following on this particular tale. De La Cruz’s colors are very much integrated on the entire process, adding nuances to an already beautiful art and supporting the often busy pages to stand out and move fluidly with the narrative.

Back to Tieri’s strategy towards plot and story evolution. Right from page one, when multiple TV screens depict absurd situations, all covered by the same cloned reporter (yes, also really), it becomes obvious to the audience that this series will take multiple stabs at the conventions of doomed comic book futures. Even the utilization of TV screens and media coverage is a nod to seminal stories like ‘The Dark Knight Returns,’ but, instead of trying to provide useful backstory to the main plot, it just offers snippets of the madness around it. Harley and her cast are a source of multiple pop references, to the obvious analogy between Red Tool and Marvel’s Deadpool, mentions of resurrected characters (“that nutty redheaded chick”) to the absurdity of some of DC’s plots on the nineties.

And yet, despite of all of that self-referential baggage, “Old Lady Harley” is not as hermetic as one might think. Sure, readers who have witnessed her origin on the regular Harley series, as well as more on Red Tool, will appreciate the issue further, but those coming in cold should have little trouble understanding everything that is going on. The entire issue feels very much like a contained adventure, with just the right amount of exposition to get the momentum going.

If any criticism is to be drawn, that would fall on the pacing around the middle of the story, when Harley and Red Tool overstay their welcome a bit much with the Laughing Boys Gang. Not that it is not relevant to the plot – it surely is – but is feels to drag at a time where the readers are likely more interested on everything happening around them. In a gem of world-building, it feels somewhat claustrophobic and too contained. Again, a minor setback in a story that reads extremely well.

All in all, “Old Lady Harley” is quite a surprise for old and new readers, afraid to get the same old patch of land from Harley Quinn or the same tropes from comics set in the future. This feels fresh, absurd and, because of that, brimming with potential. From its closing pages, it seems that issue #2 will kick a different set of wasp’s nests which, if this debut issue is any indication, will lead to even crazier hijinks.

Final Verdict : 7.5 – Surprisingly fresh, while true to both characters and comic tropes, ‘Old Lady Harley’ is unafraid to provoke the conventions of the medium, while still honoring it.