Sometimes, I’m a little jealous of people who go see superhero movies but don’t read the comics. When I saw Captain America: The Winter Soldier in theaters, there were some surprised gasps and murmurs when Bucky Barnes was revealed to be Hydra’s brainwashed assassin. While this was old news to a comic fan like me, it was all so fresh to them. Their lack of familiarity with the source material probably made their viewing experience just a hint better than mine. No big plot twist over here. On the other hand, sometimes knowing the original work that’s being adapted can enhance the experience. At the end of Iron Man all those years ago, the bodyguard cover story is straight from the comics. When Stark ditched it and came clean, it might have surprised the audience but it really blindsided me because of my expectations. 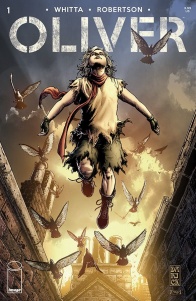 Written by Gary Whitta
Illustrated by Darick Robertson
Lettered by Simon Bowland
Colored by Diego Rodriguez
Award-winning screenwriter GARY WHITTA (Rogue One: A Star Wars Story, The Book Of Eli) teams with celebrated artist DARICK ROBERTSON (Transmetropolitan, HAPPY!, The Boys) for a new take on a literary classic — with a futuristic twist. OLIVER re-imagines Charles Dickens’ most famous orphan as a post-apocalyptic superhero fighting to liberate a war-ravaged England while searching for the truth about his own mysterious origins.

“GARY WHITTA slips effortlessly from movies into comics with a terrific story and career-best art from DARICK ROBERTSON.” —MARK MILLAR

The solicitation for “Oliver” #1 describes it as “a new take on a literary classic — with a futuristic twist.” The literary classic, of course, being Charles Dickens’s Oliver Twist. I am not that familiar with Oliver Twist. I know he’s an orphan, there’s something to do with pickpockets and porridge. That’s it. I don’t know if my lack of knowledge helps or hinders my experience with this adaptation. Only time will tell, I suppose.

With that disclaimer out of the way, let’s get into it. “Oliver” #1 opens with a mysterious figure trekking through a dystopian London. This person arrives in a camp of identical soldiers before collapsing. It soon becomes apparent that the figure is a pregnant woman. She dies during childbirth but gives birth to a healthy baby. Something is odd about the soldiers too. To them, the baby is ‘purebred’ and one didn’t know that babies cry when first born.

There is some debate between the identical soldiers on how to handle the situation. It wouldn’t be a proper dystopia without some dystopian authority and apparently the soldiers could be killed for protecting this baby. Prospero, the soldier that helped Oliver’s mom give birth, convinces them to keep the child.

Three years later, Oliver has grown and looks way older than he is, maybe ten years old. He can breathe the toxic air. He can jump across rooftops and leap over a double-decker bus. Prospero is Oliver’s primary caretaker while others don’t care for the child. When Oliver starts to question what he is, Prospero teaches him the history of the world. There was a great war and the identical soldiers are all clones, created to fight it. When the two sides destroyed just about everything, the clone soldiers were sent to live away from the society they weren’t created to function in. It clears some things up but at the end, Prospero still keeps secret exactly who Oliver is.

“Oliver” #1 is a solid start to this series. One nitpick is that, while I enjoyed the issue, I am pretty indifferent to the titular character. It’s tricky because all of the backstory and setup that takes up most of the issue is all necessary. However, that doesn’t give Oliver much time to shine. Maybe if it were a little longer, there would be more room to endear him to readers. On the other hand, “Oliver” #1 left me very interested in all the history, the culture and society of this new world. I am very intrigued and want to see more.

Darick Robertson’s art is really good this issue. In “Oliver” #1, he draws particularly strong expressions. A perfect example is the clones. They all have the same face but feel like distinct and different characters at the same time. The little touches that hint at the ravages of war (an eyepatch here, an amputated limb there) also help distinguish the otherwise identical clones.

The art of the opening pages is also worthy of note. Sometimes it’s best to show, not tell. It’s very clear that we’re in a dystopian world from the start. Diego Rodriguez colors everything brown and gray on that first page and Robertson shows the skulls, radiation warnings, cracked glass, craters and so on. A lot of detail is crammed in those pages. Robertson’s use of Shakespeare’s dialogue praising a very beautiful England of yesteryear stands in stark contrast with the art and really brings everything home.

“Oliver” #1 seems to be one of those adaptations that is inspired by the original work while being its own distinct work. There may have been some references to Dickens that I missed but I was never lost or confused about anything. It does a great job of immersing readers in this dark, new world and leaves readers with burning questions. What is Prospero hiding from Oliver? What is the state of society outside of the clones? How will Oliver change the world? I need answers and can’t wait to see what’s next.