One of the absolute best comics on the stands (that too few of you are buying), “The Omega Men” #4 takes a different approach than its prior three issues. Artist Barnaby Bagenda takes the month off, with Toby Cypress stepping in, and with him goes the reliance on the 9-panel grid, as well as the story’s forward momentum. This issue attempts to give two of the main characters – and, through them, a few of the others – motivation and depth, and the book mostly succeeds. Keep reading for our spoiler-free review. 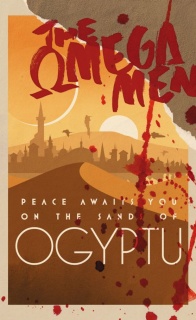 The epic, bloody saga of the Omega Men continues as a plan to rescue Princess Kalista goes horribly wrong. The Omega Men point their guns. The Citadel points theirs. And everyone pulls the trigger.

There are very few series that avoid the fill-in artist, and even fewer that are able to plan head for their fill ins. “The Omega Men” clearly have a plan in place (as Tom King told us last month) to give Bagenda a month off now and then, and have Cypress step in for stories that aren’t exactly part of the ongoing story. he majority of the issue takes place in the cell that holds both Kyle Rayner and Princess Kalista, and King and Cypress use flashbacks to tell both characters’ origins.

It is interesting to see how Kyle Rayner’s origin in the New 52 really hasn’t changed all that much, but little bits are adapted to make it fit into the new timeframe. Saying that ‘every lantern was down’ is a not-inaccurate way to describe “Emerald Twilight,” but it leaves a ton of wiggle room, story-wise, to decide exactly what happened when Hal Jordan went nuts in this new continuity. Other than that one instance, Rayner’s origin remains in tact, and while he didn’t go through every single character beat, you get a really good sense of who Rayner is, and for readers that haven’t been reading the character in other books before starting with “The Omega Men,” that is a useful tool.

Kalista’s origin is a little trickier to talk about – we know, from last issue, that she is in cahoots with Primus and the Omega Men, but Kyle doesn’t know that. So, when she’s talking about how she got to where she is, you know that at least some of it is bullshit. There isn’t anything in her story that seems especially untrue, but because of the circumstances of their conversation, you have to take it all with a grain of salt.

Because the story isn’t moving forward too much, and especially because I’m not someone who needed a refresher on Rayner’s origin, the issue dragged a little bit for me. It is helped a lot by the frantic and stylized work that Cypress brings to the book. His style is so different from Bagenda’s that it is hard to compare the two. Cypress also, aside from the first page, completely abandons the 9-panel grid that has been such a cornerstone of the book since it started. While his style is more suited to the loose panel structure that we see throughout the book, it still feels odd to be reading this book without a more structured layout.

Cypress makes it work, however – he uses full pages with minimal panel breaks to tell the story, and the technique is elegant and cinematic, allowing the reader to be in the same position as the characters in the book – when hearing these stories, you can imagine Rayner and Kalista imagining the details in epic style – no one mentally pictures stories as stick figures, do they? Cypress draws everything as more fluid than Bagenda does, as his figures stretch, bend, and contort for maximum dramatic effect. He isn’t concerned, in the slightest, with presenting a realistic or ‘accurate’ version of the characters – instead, he tells the story in a visually interesting way, and spares no detail to make the story work, even if that means that his character faces shift a bit from page to page. Especially in a story as self-contained as this one, you can get away with that.

The last bit of the book ventures into some spoiler-y territory, so I’m going to avoid that for now, but it is the only part of the issue that really affects the story going forward, and only does so incrementally, just reinforcing ideas that have been suggested elsewhere. One of the aspects of the book that I really enjoy is the decision that was made to make Rayner as close to a pure hero as possible. This book is all about shades of grey, but he is firmly still in the white (lantern) hat. Having him as the foil for the sometimes villainous actions of his counterparts works very, very well.

Final Verdict: 7.6 – Ultimately, this issue is far better than your average fill-in story, and Cypress is mainly responsible for that. That’s not a knock on King’s script, but rather just a celebration of a really talented illustrator.