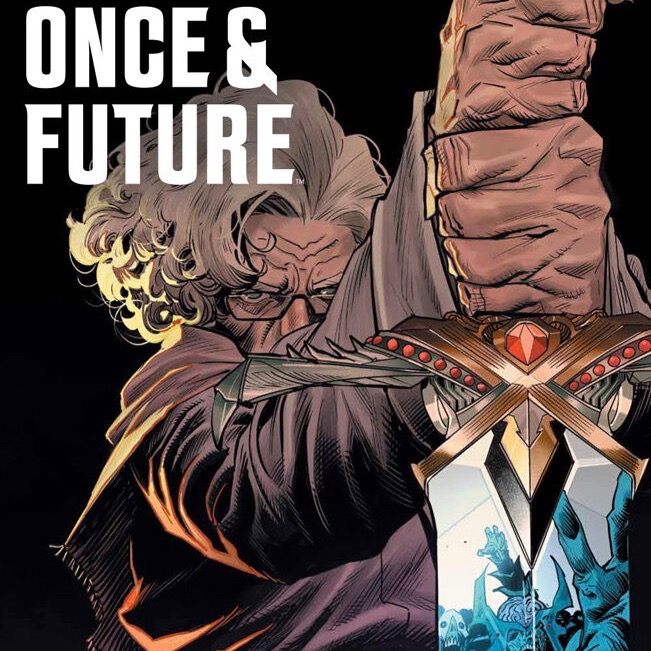 With the debut issue already in its sixth printing and the follow-up in its third before it even hit the stands, writer Kieron Gillen’s new series is a runaway hit. Read on to find out why “Once and Future” #2 is one of the most complete comics you’ll read this year, but beware of minor spoilers. 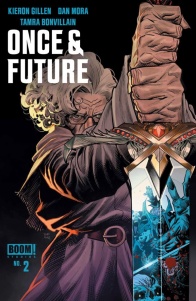 The McGuire family has held back supernatural threats for generations, but this time they messed up. As an ancient evil arises from the grave, Bridgette and Duncan find themselves up against forces bigger than they could have expected, and faces new and old are about to complicate things further.

First off, you could buy “Once and Future” #2 for Tamra Bonvillain’s colors alone and it would be totally worth it. Without question, she’s one of the best in the game and her work throughout this issue is hands-down as good as it gets. By the same token, you could buy this book simply for Dan Mora’s inks and you’d also be justified. His character design for King Arthur – and the incredible transformation the fabled king undergoes in the first few pages we see him – are utterly breathtaking. Ed Dukeshire’s letters are also outstanding, as is Kieron Gillen’s disarmingly funny, highly imaginative, well constructed script. In short, each creator’s work is outstanding on its own. Taken together, however, they make for one of the most complete, satisfying books of the year.

All of that being said, the real hook here may be the funny, fresh, and authentic relationship between formerly retired monster hunter Brigitte McGuire – also known simply as Gran – and her hapless adult grandson Duncan. In many ways, their relationship is built around a simple but effective rehash of the classic “odd couple” buddy cop trope, with Gran as jaded veteran who’s already seen too much and Duncan as the wide-eyed, incredulous neophyte who’s forced to come to terms with a “real world” he never imagined.

Thankfully, though it isn’t exactly subtle, Gillen’s script shows enough restraint and self-deprecating humor that this potentially clichéd dynamic reads like anything but a gimmick. Rather, Gillen’s dialogue crackles with wit and charm – especially when coming from Gran – even as it reveals key pieces of backstory and continues to detail the book’s rather unique reinvention of the King Arthur mythos. After three beautifully rendered, gorgeously colored, literally visceral pages depicting King Arthur’s long prophesied rebirth, Gran coolly cautions her unsurprisingly dumbfounded sidekick, “If your jaw drops every time we see anything with a little fairy sparkle on it, we’re going to be spending half our day picking it up.” Never mind that they’re watching one of the most crucial events in the history of the British Isles even as it unfolds right before their very eyes, Gran instinctively knows they need to keep things in check to be prepared for whatever happens next.

Whatever they’ve just witnessed, it’s merely the beginning. Over the next several pages, things intensify even further, hitting a fever pitch that seamlessly segues into a brilliant and gratifying cliffhanger that portends even more action to come.

Honestly, it’s hard to overstate how well each element of this book works in concert with the others. The narrative structure, visual rhythm, and pacing are a joy to behold. Like an experienced jazz ensemble trading fours, Gillen, Mora, Bonvillain, and Dukeshire all know the perfect time to come in and the perfect time to back off to give someone else the spotlight. Not coincidentally, the intense two-page spread that hits just over the halfway point is a perfect example.

First, a relatively dialogue-heavy sequence sets things up. Gran, in her role as the steady, unflappable center, cautions Duncan to not overreact and rush headlong into the action. “Honestly, dear,” she says, “we have to work out what their plan is before we have any hope of stopping it.”

Turn the page and the tension skyrockets as Mora and Bonvillain take charge, delivering what is likely their best one-two punch of pages in the whole series. Meanwhile, Dukeshire adds a subtle, understated flourish in the form of a guttural sound effect, and Gillen leans into the silence, letting wordless pictures carry the story. With great framing, powerful lines, incredible detail and pitch perfect colors, we see a sinewy, intensely creepy King Arthur calmly draw fresh blood and – well – rather graphically assess the situation.

Then, on the right-hand page, Gillen chimes back in and Dukeshire’s letters intensify until all four creators hit a collective crescendo in a single, bone-chilling panel. It’s a perfectly timed reveal, but also a twist and a thesis, a sly commentary, and the cornerstone of this fresh, surprisingly relevant story that you simply need to read to fully appreciate.

Over the centuries, wildly different versions of the King Arthur myth have been told. At its core is the story of a once mighty king who unified his people to fight off foreign invaders. Here, the very notion of who King Arthur perceives as foreign – who he views as “us” and who he views as “them” – is a crucial plot point, making this not only a timely and topical version, but one of the best and most interesting, too.

Final Verdict: 9.6 Each creator’s work is outstanding all on its own. Working together in concert, “Once and Future” #2 becomes the stuff of legend.