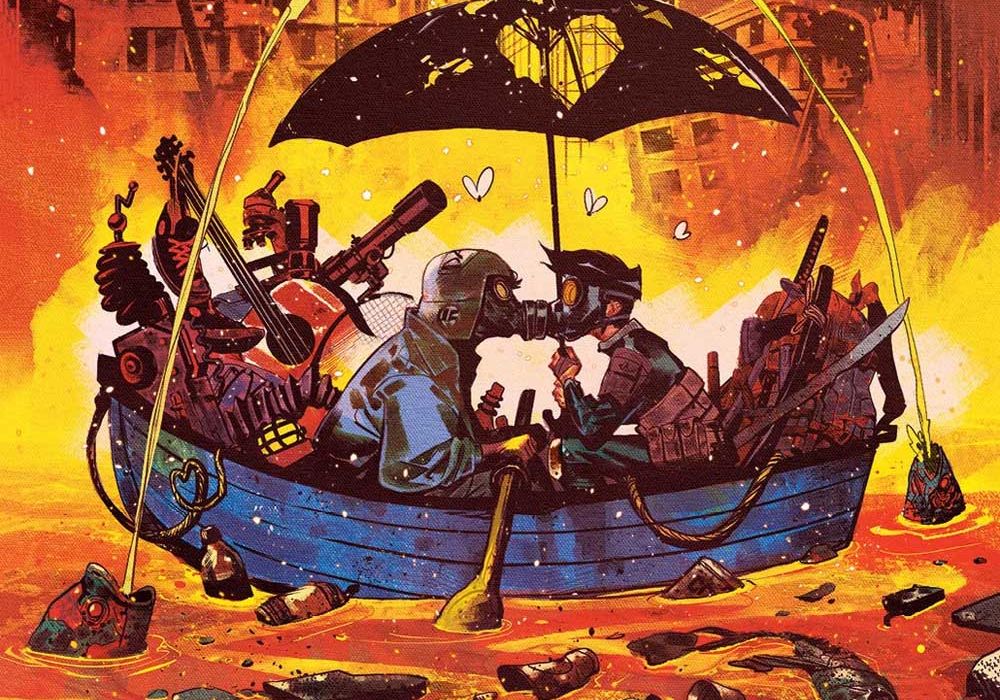 Over the years, the post-apocalypse has expanded beyond lone wolves and the restructuring of society. We’ve got love in the wasteland, comedies of people navigating zombie apocalypses, and plenty of stories in between. There have been heists, races, and death matches. It’s become a rich setting for telling a whole variety of unique and fun stories. You just need a strong voice to make it rise above the rest. Unfortunately, while “Once Upon A Time At The End Of The World” #1 has some standout moments, overall, it doesn’t do much to leave a lasting impression. 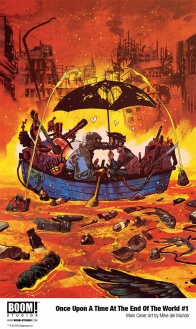 In this epic post-apocalyptic tale, Maceo and Mezzy have never met anyone like each other, and they’ll need all the help they can get to survive a planet ravaged by environmental catastrophe. This epic trilogy — each issue overflowing with 30 story pages — spans a lifetime as philosophical differences tear at the threads holding Maceo and Mezzy together. Will they, and the earth beneath their feet, ultimately be torn apart?

It’s not that “Once Upon A Time At The End Of The World” #1 is terrible. It’s a competently written script that occasionally has some fun moments. Jason Aaron still has a handle on the balance between characters who are badasses and vulnerable. In this case, he splits that up between two characters instead of some internal balance, which continues to be his gift. It just seems like the problem is that the characters are kind of formulaic. It’s not like the “post-apocalyptic romantic comedy” is an overused genre, but we have seen it before. Some moments feel incredibly groan-worthy, like Mace risking his life because he found love at first sight or the LADY of the pair being the total badass. Again, these things might have felt fresh at one point, or maybe Aaron could have added some elements to make it feel new or tongue-in-cheek, but as it stands, it all feels very generic.

The same thing can be said of the issues’ art. While it’s clear that Alexandre Tefenkgi is a talented illustrator, the vision of the future is, once again, a little by the books. The streets are floods of garbage and electric poles, the monsters mutations of familiar creatures. The costumes are somewhere between Mad Max and black ghost balaclava facemasks. The narration suggests a more visually exciting world (unless the glaciers of melted plastic are the small piles of plastic bottles seen throughout.) Much like the script, the visuals of the post-apocalyptic world of “Once Upon A Time At The End Of The World” #1 feel too familiar. It’s a bunch of solid pieces, but not necessarily the most creative execution. When you have another comic out now that explores the end of the world due to whimsical genies, you have to do SOMETHING to make your mark. Even the coloring, while believably drab, doesn’t do much to make it stand out. Yet, while the script, characters, and location all feel rather uninspired, there are the occasional moments of levity and creativity, largely thanks to Mace’s tour of his post-apocalyptic base.

These are probably the strongest sequences in the premier issue of the comic, as the adorably geeky Maceo takes his mysterious new companion through the tower. I’ve heard it said that a good letterer is like a good drummer. You don’t quite notice they’re there if they do their job right. But sometimes, it’s something special if they rock out a memorable solo. AndWorld Design is the real star of “Once Upon A Time At The End Of The World” #1, injecting the panels with some real heart and humor. Each of Maceo’s rooms has its unique font reminiscent of when a superhero arrives in a comic. These names, combined with the visuals, say a lot about Mace’s personality, which we see when they walk past the room of his dead parents, and he’s suddenly quiet and somber. The proud, enthusiastic survivor becomes almost unrecognizable as he relives the trauma of the past. It’s some really compelling shorthand storytelling, taking advantage of the medium. Unfortunately, it also implies that there might be an intended lighter or more sarcastic tone that the rest of the book lacks. Throughout, we see glimpses of some visual storytelling from Tefenkgi, visual aids that suggest the passage of time, the new order of the world, and reminders of the old world. But throughout, there just isn’t enough to make it feel unique.

Who knows the book’s intended tone or where the story plans to go? “Once Upon A Time At The End Of The World” #1 ends with an abducted and disillusioned Mace, utterly changed by the world, that comes out of nowhere. We don’t know much about the world. We don’t know what caused the apocalypse. We don’t know the extent of humanity or who survived the cataclysm. We also don’t NEED to know these things, but it’s also difficult to tell if Aaron wants us to know these things. It’s setting up a larger story and mystery of breaking the cutie and exploring the things he created in the wasteland of our world, but based on this first issue, who knows if there is a reason to come back to the story. Again, it’s not bad, just uninspired. You don’t necessarily need to reinvent the wheel when doing a postapocalyptic tale, but it seems that Aaron wanted to do something different, and the execution just isn’t there.

Final Verdict: 5.0 “One Upon A Time At The End Of The World” #1 has some occasional fun moments but lacks a strong voice to make it memorable.