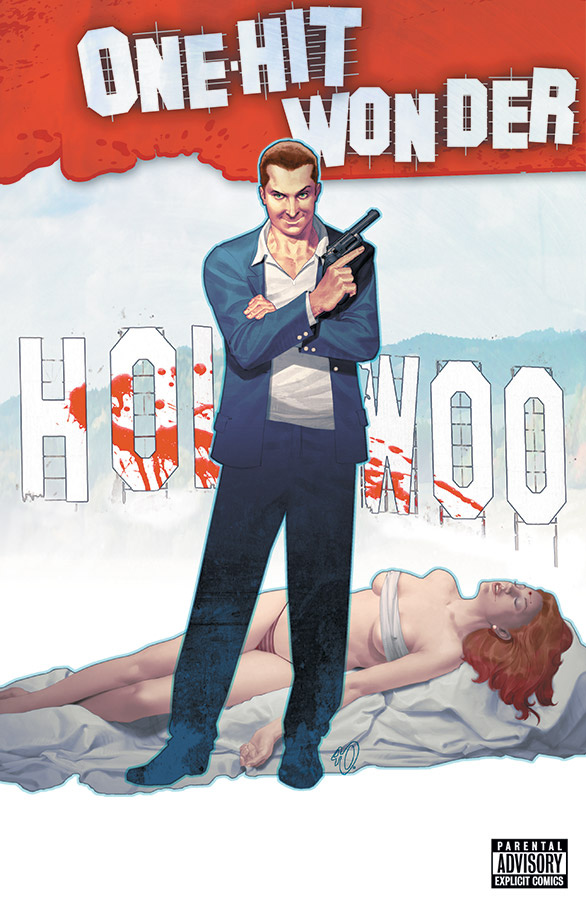 Reviews
With “One-Hit Wonder”, Fabrice Sapolsky and Ariel Olivetti aim their sights at Hollywood’s killer culture with one of their own. Read our advance review below to see if they hit their targets! Mild spoilers ahead! 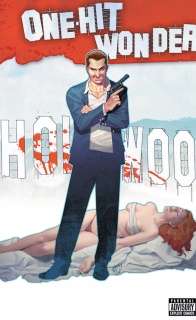 If there was a thin line between reality and fiction, Richie Reese tore it down. Better, he crushed it. Smashed it. Destroyed it. From child star to hitman in Hollywood, this is the story of a glorious bastard.

Richie Reese is a former child-star turned assassin, having announced his new direction in life with a PR move that’s just crazy enough to work in the exaggerated world of “One-Hit Wonder”, the new miniseries from Fabrice Sapolsky and Ariel Olivetti. His agent’s on the phone, asking how he can  possibly hide himself in Hollywood after what he’s done. “Don’t worry, buddy…” Richie maniacally grins as he seemingly looks right into the audience, “where I am, no one will ever find me.” The focus shifts to the gates outside the door, revealing he’s now holed up in the former castle of Pop’s late king: Neverland Ranch.

“One-Hit Wonder” is, at its core, an assault by Sapolsky and Olivetti against the pump-and-dump nature of Hollywood and the way it treats its stars. Protagonist (well, douchebag whose POV the story’s told from) Richie Reese has been discarded by pop culture after he grew up and the only want to reinvent himself, he finds, is as an assassin. It’s an idea that sounds a bit too cute to work, but in LA anything’s forgivable (he coughed while scrolling through Instagram pictures of Justin Bieber apologists calling their idol a hero for his recent DUI arrest.) Reese is an interesting character when you get past his smarmy one-liners that make it seem like Sapolsky’s trying just a bit too hard to be Mark Millar, the idea of a thrown away star fighting back against the system that took him off the front page is one that has tons of mileage, especially when imbued with imagery like Neverland, the abandoned monument to another child star who used to rule the world, creates what could be a really compelling read.

Of course, it’s not like child stars have ever been completely innocent of their downward spirals, have they? Stars like Michael Jackson or Richie Reese go crazy just because the option to just do everything is there: the drugs, the sex, the violence. It’s the lack of discipline that leads to them going crazy, and said absence of self-control is what leads to Sapolsky focusing less on Reese’s transformation from child star to assassin and more on tits, drugs, tits, and juuust a dash of misogyny. Granted, those are all things that would be involved with the story of a character like Richie’s, but all of them, especially the last one, are presented without any form of judgement. Instead, it’s awesome for Richie to hang around with two submissive topless girls in an abandoned Neverland Ranch (which actually is supposedly home to tours of the gardens for sick kids so I hope he at least brought a privacy screen.) It’s awesome for Richie to fire guns in a club. It’s radical for him to follow a woman in a parking lot, pull a gun on her, and say “Who’s your daddy?” Sapolsky indulges so much of the script into these vices, that none of the characters end up being even remotely likable, especially Richie who went from having the potential of being a great anti-hero to being Alec Baldwin with a revolver.

That said, it’d be hard to present a lot of pathos in this story with Olivetti’s art. I’ve no clue if the flatness in the characters and scenes are intentional, representations of how plastic celebrity culture is like what Greg Land’s recent work inadvertently became. Similar to how I can’t really tell if Sapolsky’s being sincere with his vulgar bro-ness, Olivetti’s art lacks charm and turns a kind of weird character like Reese into a monster. Through Olivetti, we get a comic that’s strung out, coked up like the subjects its roasting, but seemingly just as unaware as they are. Also, when he does try actual emotion (like when a youth sees a car crashing into a pool) the kid’s eyes grow to bug-like levels.

Of course, there might be a plot twist in a future issue where this turns out to be the prelude to an insect person invasion. In which case, hell yeah. Unfortunately this doesn’t seem to be the case. “One-Hit Wonder” is a book with so much potential in its premise, and an entire wasteland of haunted pop culture imagery to really make something great. Instead, we’re left with a husk with all of its charm sucked out, a victim of a system that glorifies edginess over substance; the same system it should’ve been pulling the trigger on.